wait, did that really just happen?

Okay, folks.  Labor Day has come and gone, summer is unofficially over, playtime is over, time to get serious!  That's the attitude I had as soon as I awoke this morning.

But eventually I got going, and it looked to be a glorious day.  I headed out for a lovely run in the early morning hours.  The air felt crisp and clean.  I felt well rested from the long weekend.  My shoo-gooed shoes were ready and willing.

It was toward the end of my route, and I was approaching a woman and her two little dogs from behind.  They were standing at a corner, and I intended to turn on that corner.  I slowed to a walk since I figured they didn't know I was coming up behind them. I didn't want to startle anyone as I went passed, so I slowed to let them know I was there.

One little ragamuffin dog saw me before the human did and started to freak out.  This prompted the woman to reactively freak out and begin reigning in ragamuffin number one, who was on a surprisingly long retractable leash.

While all that was going on, ragamuffin dog number two reactively freaked out and came around from a different angle on a similarly surprisingly long retractable leash.  This all happened in about 2.76 seconds.

Luckily, he was just a ragamuffin, so he only got this far: 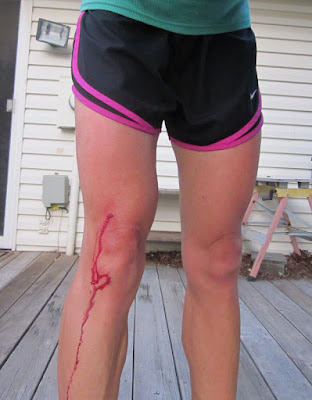 It all happened so fast.  When RM2 came at me, I just bent down to say hello, let him smell my hand, all that jazz.  But he went right for the kill!

I felt the sting on my thigh, and at first, thought he'd just scratched me with his claws.  The woman was apologizing profusely, and I, all strung out on endorphins, couldn't feel upset with her.  I assured her it was all fine, and I continued on my merry jaunt.

A few paces onward, I decided to look at my thigh, which so happened to be oozing a nice stream of blood.  I wiped at it with my hand, only to have the oozing stream replaced anew.

I turned back to the woman and calmly (she was still kinda freaked) asked if her dogs were up-to-date on their rabies shots since one of them bit me and caused me to ooze.  She assured me they were.

That was it, I don't know if I should've interacted with her anymore.  I was about a mile from home, so I just ran on home to stop the ooze and get cleaned up. 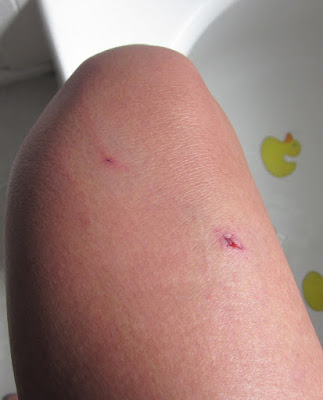 Moral of the story?

Don't trust those little ones.

Labels: running, surprise, what category would this even fall under?, wounds

Oh ouch, that must have been quite a shock all round. I don't trust any dogs at all, big or little. Can you tell I'm not a dog fan? Hope your leg heals soon.

Never trust the little ones! Also, reason #89 why retractable leashes are horrible. Heal up well!

OUCH. You gotta watch out for those little RMs. I used to run past a house with a loose one, and he'd often come chasing after me. I switched my route up after a few close calls.
I'm sure the lady feels awful. Hopefully her RM feels a little sorry as well. Good thinking to ask about their shots!

Ow! Those little fuckers. You've had quite the gamut of owies this past year.

It all happened so fast. I've had several dog encounters like that, so always want to give them fair warning. It was an interesting start to the day, anyway!

I remember seeing a list that ranked dogs by their viciousness. All the top rankers were little dogs - now I get it!

I'd switch my route too. I'd never seen this crew before, maybe they're new to the area? The owner did seem pretty distressed. Either way, I'll be on the lookout for "Fang" and his gang from now on!

So far, now that I can compare, I'll take a ragamuffin attack over a bee sting any day.

Ow. That's why I don't trust the little ones. The can be more psyho than a pack of pit bulls. When I walk my two mutts, we will occasionally pass an older gentlemen and his two pocket dogs. Both tend to go crazy when they see us but the smaller of the two goes all Cujo and tries to attack bot of my two mutts, even though he is about the size of Clair'e head.

On a side note, that is one of the reasons I stopped using those retractable leashes.

We've got some little ones around the neighborhood that lose it when we're walking China. They don't phase her, I'm not sure she realizes they're even dogs. I know they so badly want to bite us!