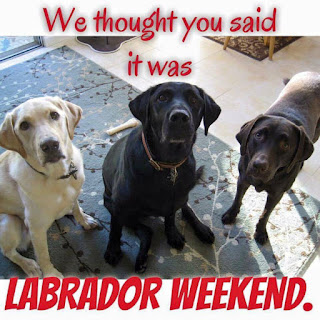 Happy Labor Day!  Hope no one is laboring TOO hard.  Meego and I completed our volunteer marathon duty, so another one in the books.

It was a beautiful day for it.  Not too hot, no real wind to speak of, and some friendly clouds floating around.  We left the house at the butt crack of dawn to get to our station.  I had to trick out each of our bikes with lights, so that was kinda fun.

Meego wouldn't let me take a photo of his face.  Look at  him here pretending to be all attentive to the ONE approaching runner. 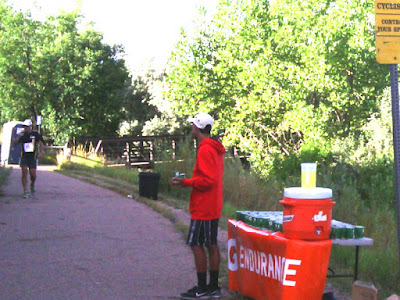 The course is traditionally a one-way gentle downhill slope starting north of the city and finishing at a downtown park.  Because of closures to the trail through the Air Force Academy this year, the course was altered to an out-and-back, starting and ending at the downtown park. 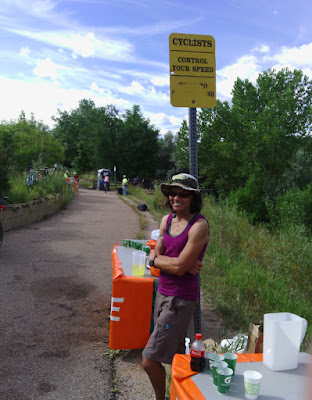 Our aid station was at mile 11, and then we got them again at mile 18.  I tellya, looking at some of them the first time through, we weren't sure if we'd see them on the flip side.  Most of them trooped on through.

I'd say things went very smoothly at our post.  There was quite a bit of recreational traffic in addition to the marathoners, but everyone seemed pretty polite.

One poor woman crashed her bicycle and was helped down to our station.  She was rather banged  up and didn't seem "all there".  Pretty spacey.  She convalesced for a while and then got a ride.  Hope she's okay.


But it was all pretty inspiring.  We saw old runners, heavy runners, blind runners, recovering-from-something runners, along with the fast runners and slow runners.

And there were a few that we didn't see on the flip side.  Bailed out somewhere in between, and there's no shame in that.  One of the guys at our station gave a runner a ride back to the park after she was too sick to continue.

After the last runner'd gone through, and we'd cleaned up,  Meego and I stopped for lunch and a visit with an iguana on the way home. 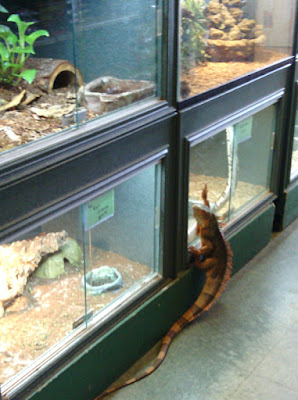 Because what's Labor Day without an iguana?

First, I just have to ask what you did to Meego? I realize this is pretty much a picture of his back, but it just doesn't look like him! When did your youngest child get so grown up? If you hadn't told us that was Meego I would have been certain he was one of your older boys!

And hey ... who's that pot-head in the second race photo? (I'm totally kidding! Forgive me!)

Sounds like an adventurous day at the race and time well-spent.

You didn't by chance buy a snake while visiting the iguana, did you?

It's nice to see that the panhandlers are showing some creativity, but I feel like I completely misspent my Labor Day since it didn't include an iguana.

Is that a new tradition? Hug and Iguana on Labour Day or something? Cool. Better than strange ideas about what you can wear :-)

I dunno, Meego aged about 5 years in a year and a half. How does that happen?
And who knew the aid station wouldn't have any weed!?

Well, just remember for next year.

So how come Meego's gone all camera shy? Glad to see you haven't. :D

I can sympathize with that poor lady who wrecked her bicycle. Hope she's ok.
I'm sure the runners all appreciated you and Meego getting up at the butt crack of dawn to work the event. Sounds like you got to see all kinds of people.. At least once, sometimes twice!
I, too, didn't realize Labor Day and iguanas go together. I thought I was supposed to WORK on labor day! I'm so confused.

My siblings all hide from the camera. I'll have to meet some more iguanas. They seem much less camera shy.

Just curious, why was someone on a bike at a running event?

It's probably because he knows it's meant for the blog!

I always appreciate the race volunteers, so it's nice to be one if only once a year. And I think marathoners are most appreciative - it's a long way! One guy did ask us for a Segway, which we sadly weren't able to supply.

I thought of you when the bicycle crasher showed up. Several runners told us she was "back there", and when she arrived, she was pretty out of it. I was curious as to what happened, but she didn't really seem able to answer simple questions. I hope she got checked out!

Maybe in your case, Labor Day can be take-your-iguana-to-work day?

The marathon was run on a recreational trail that the organizers couldn't really shut down on Labor Day. The hope was that everyone would just get along. Other runners and walkers didn't seem to mind at all, but I think the bicyclists were a little grumpy. Everyone partook of our refreshments, though! I'm not sure how that woman crashed.

I'll take camera shy over a daily fish-face selfie. The iguanas I know are all hams.

Sounds like a nice Labor Day tradition - helping out at the Marathon. I imagine you get to see a wide array of runners making the trek. I also imagine that trying to run a marathon down that trail while keeping it open to the cyclists is a bit of a challenge at spots. Good job keeping the runners hydrated.

As far as I know, there were no road rage (trail rage?) incidents between cyclists and runners!