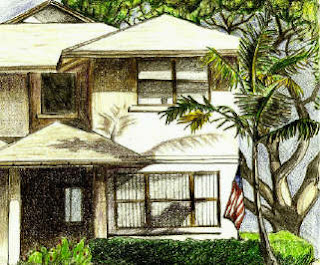 Greetings on this Memorial Day weekend. I was drawing another one of them houses, and I found myself particularly drawn to the American flag a-waving. It just seemed an appropriate thing to be doing this weekend.

Then there was the Indy 500. Do you follow auto racing? I sure as heck don't, but people I live with, particularly one whose name rhymes with "Queego", seem to live for all things auto racing.

So the Indy 500 was on yesterday. I didn't watch, but I heard all about the ending:

Magnum: The guy in the lead hit the wall just before the finish and another guy passed him to win.
Me: Aw, that's sad.

Magnum: Yep, and he's a rookie too.
Me: Aw, that's really sad. I feel sorry for his mom.

Magnum: He was driving the National Guard car too... on Memorial Day weekend.
Me: OH STOP, this story just keeps getting SADDER!

You can feel it in the air. It's just about here. Summer vacation!

Tomorrow is the last day of school around here. The kids are getting rowdy, which can be challenging to a friendly neighborhood crossing guard. Just look at this here blatant rule breaker:

Clearly, he's in violation of the you-must-walk-the-scooter-in-the-crosswalk code. He's still about 6 hours away from being a 5th grader and already he's pulling stuff.

Oh well, the other half of my job at the school finished up on Tuesday, so half of me is already enjoying summer break. Today, I indulged by going to the bicycle shop, under the clever guise of taking Meego's bike in for a tune-up.

While there, I drooled a bit over the many treasures - already dreaming a little of my third bicycle, which will most likely remain a dream for practical reasons. Now, we all know here how I like to name my bicycles based on foreign words. There's beautiful "Bella" and speedy "Tessa". While at the bike shop, I saw a poster that read: "Allez means Go!", (that's french) so I thought my next bicycle could be named "Allez". Well, it's kind of a pretty name, but too prone to having a "Bian" added to the end, and I shouldn't do that... not that there's anything wrong with Allez Bian.

In the afternoon, it was back to the school zone. Here we have the emo-wannabe. See the girl in blue? Clearly outside the crossing zone? She does that every day. She's also texting while walking. Every. Day.

Also at school today was Meego's 5th grade "continuation" thing. It's quite bittersweet really, and I don't much care for these things because I think (1) they're a bit silly, and (2) I don't like good-byes and would rather just let the year quietly end.

But, Magnum and I were in dutiful attendance, which helps explain these crossing guard pics. Magnum was off work for the afternoon and felt we needed a photographic record of my rookie season I suppose.

If nothing else, it made the drivers quite paranoid.
.
Posted by Abby at 5:13 PM 6 comments:

an experiment in sibling rivalry

Back in late March/early April, Wolfgang and I went out and got him a coupla pairs of shoes for track season. A pair of expensive trainers and a pair of exp

ensive racing flats. Here's an image of what the expensive trainers looked like after not many weeks.

What's wrong with this picture? Anyone??

Answer: There's only one shoe. Shoes come in pairs because feet come in pairs, and somehow, Wolfgang managed to lose one of the new shoes, rendering the shoes formerly known as "pair" totally useless.

Surely, the other shoe will show up, I thought. Surely it's in a lost-and-found. Surely a janitor or a teammate found it. Surely it will be returned. Surely no one would want just one shoe.

And now Wolfgang is looking ahead to cross-country for next fall. He wants shoes. Again. I don't typically have a problem supporting these extra curricluars, in fact we rather encourage them within reason. But it's painful for me to think that there are two perfectly useful halves of a hundred-dollar pair of shoes floating around out there all separated and lonely like a couple of sad cracked mitzpah pendants.

So yes, we will buy him a replacement pair, but I think there should be some consequence. He's going to have to pay something somehow.

A winter ago or so, Chaco lost a perfectly good and nearly new winter jacket in a similar way of the lost running shoe. Rather than have him learn his lesson via hypothermia with possibility of death, we bought him another. There must have been some consequence, but I couldn't remember, so I asked him.

"Mmm... nothing", he replied, probably wanting to forget. "I learned my lesson and haven't lost anything else", painting a pretty picture of himself. "Why?", he wanted to know.

"I was just wondering what Wolfgang will need to do to replace his running shoes", I informed. "You say 'nothing'?"

OH, how the perspective changes!

Maybe that should be the policy. If someone loses something out of carelessness and needs it replaced, we'll have the siblings choose the consequence. Might be fun to watch at least.
.
Posted by Abby at 3:45 PM 4 comments: 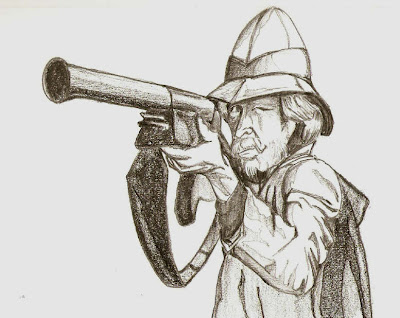 Greetings and welcome to Illustration Friday on Sunday. I'm a day behind my usual fun, but I've been on safari! Well... not really, but the prompt is "safari", so yeah, sorta.

Several years ago, I read all about Henry Stanley and his travels through Africa. It was how I spent Meego's preschool year. Such adventure! Such hardship! (the African thing... not preschool, not really).

Ever since, I've remained interested in the early explortion of Africa and think it would be fun to go on a safari. I'm not a hunter, though. If I ever make it there, it will be more comparable to Eliza Thornberry, and hiding behind the guys with the big guns.
.
Posted by Abby at 10:48 AM 9 comments: 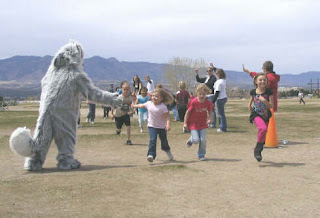 Yeesh, it's been a while since I've done a silver lining post, not that there hasn't been plenty of shiny stuff.

First of all, as mentioned, this past week was Run With Lumber week. Yay! My last one as chairperson! Okay, it is a lot of fun, but it's also a lot of work and fretting, and I'm quite relieved that this one went off well and I can leave it on a good note.

Chaco and Wolfgang did a great job as Lumber too, even helping to get the course set up and doing other volunteer jobs 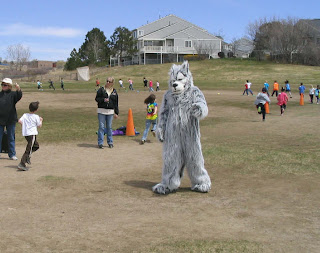 when not in the suit.
True, I do give them some ca$$h for their efforts... but that's just to ensure that someone is in the suit, otherwise it's just "Run Around On The Field With Teachers and Moms and Stuff". Not nearly as fun as "Run With Lumber".
It was also Teacher Appreciation week. The school does a weekly "newscast". It's really cheesy, but kinda cute in a cheesy way. Anyway, a few students went on to name specific teachers they appreciated and one of them appreciated me.
It was a 5th grade kid who I expect is bored and is happy to be pulled out of his classroom for any reason. He said something like "I appreciate Mrs. Normal because she helps me with my daily 5 and with my research and lets me tell jokes and stuff..." Okay, so he could've stopped with the research, but oh well, I'll take what I can get.

And the weather's taken a turn for the better. Recall that last weekend it was snowing, this weekend it's in the 80's. I guess we're just skipping spring altogether.
Oh, and Manny won. Again. 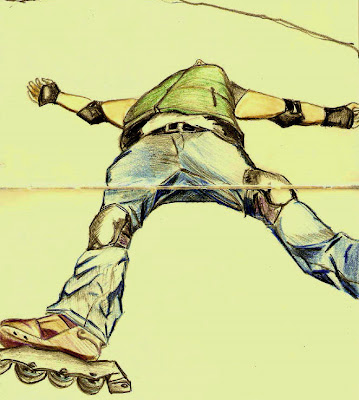 This week's prompt is "beginner". Sometimes I think I should get me some in-line skates and learn to use them, but.... 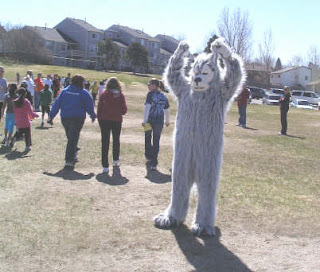 Yay! Run With Lumber was another success. And by "success", I mean that nobody froze, passed out, hyperventilated, vomitted, nor broke any bones. Works for me!

The weather gods literally shined on us and brought us a not-too-hot, not-too-cold, not-too-windy, not-too-wet day.

I had fun, too. And I would like to thank my following helper:

Chaco and Wolfgang resumed their roles as the well-paid Lumber. Monsters all around!


As a result of spending the entire day at this event, I took the whole day off - no crossing guard, no teacher's assistant. I noticed today, back on the beat, I was getting more waves from the drivers. Did they perhaps miss me??
.
Posted by Abby at 6:45 PM 6 comments: 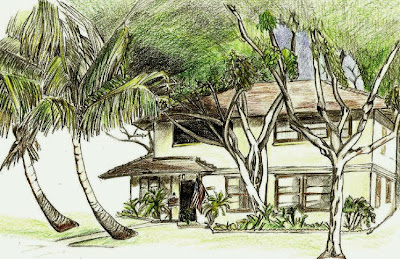 Welcome to another episode of Illustration Friday... on a Sunday once again. It's actually SNOWING here. I thought April showers bring May FLOWERS?? Hello???

This week's prompt is "lesson" and I have this house to show for it. I was flattered to be recently asked to draw this, and as I contemplated this fun project, I realized that I've never drawn a house before - not since about second grade or so, where houses were just triangles on top of squares with doors and windows and chimneys with curly-cue smoke. 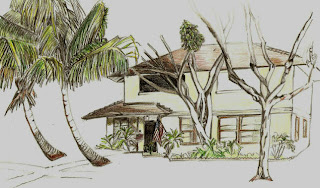 But, what the heck, I just started in and figured it would be a good lesson, and it was. I could just get lost in these trees - we don't have palm trees here. 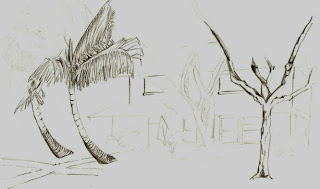 Just plugged along, step-by-step, learning along the way.