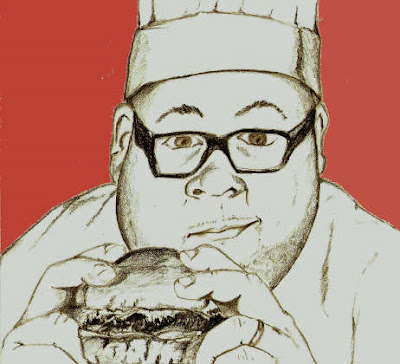 What? Already Tuesday? I totally missed my Illustration Friday entry for last Friday. But, since that is just a self-imposed rule, I figure it's okay for me to break it... this time.

I was just savoring the Holiday time off with the family, so that's appropriate, right? Since this week's prompt is "savo(u)r"?

Of course, "savor" doesn't just apply to food. It's to "appreciate" or "luxuriate in" well... anything. Still, I chose the food thing, particularly a chef savoring his own food. How many times do we, as "chefs", take the time to savor those things we've mainly created for others' enjoyment?

Yesterday, I came upon this on the fridge "to do" whiteboard: 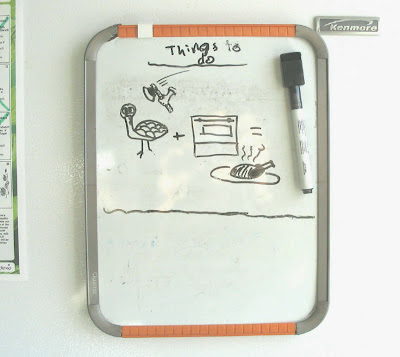 I guess Chaco felt he needed to put it up there in case I forgot or something. (Note: I added the hatchet as it was missing and I felt that step was important).
Of course, it's not about the turkey, not really. It bothers me when people refer to Thanksgiving as "turkey day". I just want to grab them by the lapels and shout, "It's not about the turkey, you ingrate!", but I don't.
Either way, I am thankful for the turkey who gave its life and is now roasting away in the oven.
But I am most sincerely grateful for friends I've met through this blog. Really, just know that I would gladly take a bullet for any one of you.... but maybe not in the head, but in like an arm or leg or something.
Abby
xoxoxoxo
.
Posted by Abby at 9:49 AM 7 comments:

Okay, yesterday I gloated about having all my Thanksgiving fixin's on hand. That wasn't entirely true. I need to do a run for yams and Cool Whip sometime today. Nothing like the grocery store on Thanksgiving eve. Sure to be every woman for herself. I do enjoy cooking, just rarely make it a priority, and the family is usually appreciative when I do. 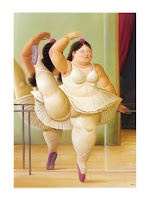 Maybe along those lines, but not necessarily so, I recently learned about a new-to-me artist: Fernando Botero. Recall that I recommended the movie City Island a few days ago. Have you seen it yet? Why not!?! Oh well, in the movie, there's a side plot that involves Botero. I had no idea who or what this was referring to necessarily. I meant to look it up afterwards out of curiosity, but I guess it wasn't all that important. Nevermind, because in an almost eerie, coincidental, synchronistic way, Chaco educated me.

Chaco had an assignment in his spanish class. He needed to put together a presentation of sorts about an artist. He chose Fernando Botero at random from a list. I came upon him as he'd begun working on the project. He was clearly not a Botero fan. 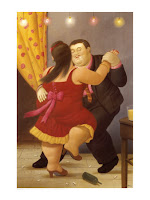 "This isn't art, it's just a bunch of fat people!" Curious, I went to see what he was talking about, and that's where I learned about Fernando Botero.

"BOTERO!! That's the reference in that movie we just watched! Now I totally get it!"

Surprisingly, Chaco was not as flabbergasted as I was at this amazing coincidence.

I've since learned a bit more about him. In the art world, he's known for these "inflated images", but the non-politically correct, Chaco's "fat people" is pretty much Botero's trademark.

I've come to rather like these plump people. I doubt I would hang them on the walls of my house, those are reserved for my children's masterpieces. But a greeting card or two is not out of the question, provided the plump people are not naked or being tortured. 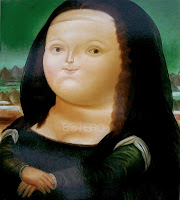 I don't want to work

but I don't necessarily want to bang on the drum all day either, so I guess I'll work.

The kids are off of school all week, so there's laziness in the air. I'm not used to this. I'm used to them trudging off to school each morning, only to return HOURS later. But NO, they just keep hanging around!

Actually, I don't really mind it. It's nice to have no set schedule and just relax a bit as fall rolls in. I do have one class going right now, but tonight is our last session for this week, so it's manageable. And, impressing even myself, I got all of my Thanksgiving fixings last week. I don't know what came over me, but I was grocery shopping and just added that stuff to the cart.

And now, I'm pretending to work.

So I told them, "not right now, I'm working", which I'm clearly not doing, but putting on a pretty goood show of. And so they're playing Life.

I may have mentioned here that we never got on the Santa Claus bandwagon with our kids. Just didn't want to lie to them. 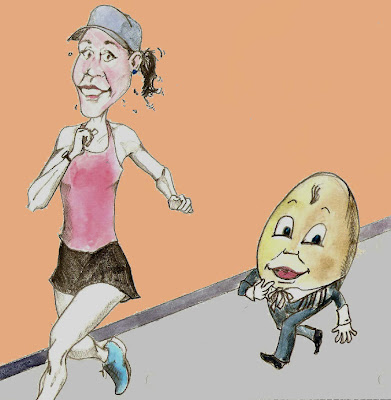 Happy Illustration Friday! This week's prompt is "sneaky", and I guess I was feeling a little cartoony. Self-portrait.

Recall that I went for a health checkup last week. Everything checked out fine, but my cholesterol number interested me. Supposedly, it's best to be below 200. Well, mine came in at 193 - technically on the good side, but just barely. But it's even higher than Magnum's number. Let me just clarify, however, that my HDL is still WAY better!

Still, the 193 had me curious. Where's all this cholesterol coming from? I exercise. I eat right. Well.... I exercise.

It's the eggs. Gotta be. I loves me some eggs. I typically eat a couple every day. I would actually eat more, but I limit myself to two. Yesterday, I decided to do a little background check on my friend, the egg:

Chaco's been home this week fighting the snot wars. While he's not sick enough to just lay around all day, he's sick enough to not be hacking germs all about the shared air of the high school.

So, he does a teeny tiny bit of homework, plays video games, fakes like he's doing a teeny tiny bit of homework, and watches movies. Today he watched District 9. That's a very loud movie. I've watched it before and actually liked it in a this-is-weird-but-pretty-good kind of way. I didn't watch with him today, but was rather going about my usual housewifery which isn't usually punctuated with such explosions and frustrated rants unless they are emanating from me personally.

Anyway, this was after I returned home from the annual Thanksgiving Feast at Meego's school. I got wrangled into spooning again. This year? Gravy. Easy, messy fun!

What sometimes intrigues me about these volunteer assignments is the picky poo volunteers. Don't get me wrong, school volunteers are typically good folks, but some can be so picky. Recall earlier this year, I did volunteer duty for Field Day. I was assigned the long jump. I worked next to another mom who told me she "only does long jump" What the...? I think I've done every event there is. I show up and am handed whatever implement necessary. This year, a rake.

And a lovely Sunday morning it is. 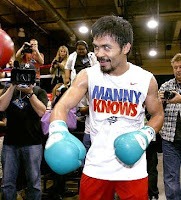 Firstly, how about that Manny Pacquiao? Any boxing fan knows what I'm referring to this morning. I happen to be a bit of a boxing fan. I'm not even sure how or why because I never watch boxing - we don't even have cable, let alone pay-per-view, and I have absolutely no interest whatsoever in MMA. I think I'm just impressed with the discipline and training required, not to mention the insanity of participating in the sport, so I follow it somewhat and can drop a name now and then. Combine that interest with the fact that I'm 50% Filipino, and it's impossible for me to not know about Manny Pacquiao. Anyways, I'm glad he won and I'm glad it's over because I was actually worried about him this time. Silly me.

In other goodness news, I finally got around to going to the doctor's for a "well woman check" a year and a half overdue. I detailed my reluctance for these things before, and don't want to rehash it. And anyway, it's the right thing to do, plus, Magnum supplied me with two sweet words: "cash incentive". His employer actually gives us money for jumping through a few health hoops. We don't even have to BE healthy! We just have to show that we know whether we are or not!

And let me just add that, in regards to the previously mentioned "reluctance", this particular time was so much better! As I was being stirrupped (yes, that's a verb), I just casually mentioned my challenges to the doctor - a bit of pre-pap-pep-talk I suppose, mainly for her benefit as an "it's not you it's me" sort of tone - which prompted her to select a different speculum than that used on normal women. Omigosh! What a difference! Ladies, if you share my deformity, give your doctor the pep talk! Better yet, purchase one of those things and carry it in your purse!

In movie news, Magnum and I both enjoyed City Island - yet another flick I'd never heard of, but it showed up in my Netflix recommendations. It's a hoot! Very fun! Go see!
.
Posted by Abby at 10:01 AM 4 comments: 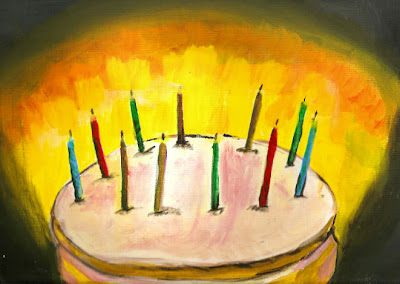 Is it hot in here, or is it just me? OH, it's Illustration Friday. This week's prompt is "burning".

I didn't put all of the candles on this cake. I don't think I have enough paint.
.
Posted by Abby at 5:11 PM 6 comments:

Today, I noticed something about my development as a mom.

Me: Really? Thanks, I'll be right there.

Phone: Hey, Abby. School Secretary. Wolfgang fell of a chair this morning while hanging some posters and hurt his thumb.

Phone: Hey, Abby. School Secretary here. Meego got whapped in the face with a tetherball. We've stopped the bleeding and his eyes aren't black yet. 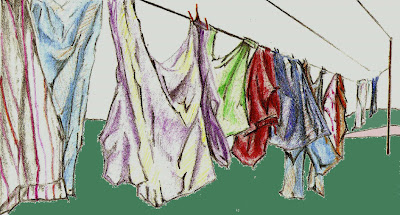 Dang, these weeks, they are a-flying by, aren't they? Already November! Already Illustration Friday! This week's prompt is "afterwards".

First thing I thought of was laundry, so I drew some laundry.

A book with the title "After the Ecstasy, the Laundry" is about getting back to reality while also being on the spiritual path. At least that's what I'm told it's about. I haven't actually read it. But I do try to live it. We're all spritual creatures, and we're also human.

I should probably try to spend less time with the laundry.
.
Posted by Abby at 4:19 PM 7 comments:

This past weekend, we had an incident. An incident involving Wolfgang, and I'm wondering where we went wrong.

Now, Wolfgang's a good kid. Works hard in school, gets good grades, helps out at home for the most part. His teachers and coaches like him. He's popular with the other kids. As such, he is often invited to parties.

So yeah, he actually went to two parties this weekend, one on Saturday night, another on Sunday. I've always trusted him to do the right thing, and his friends he parties with are good enough kids from what I know about them. It's all good, right?

Apparently not. On Sunday, he returned home, and I could tell right away that he'd gotten involved in something that his father and I don't condone. He didn't even try to cover it up, and I'm pretty sure that he felt bad about what he'd done, even felt bad while he was doing it. It was the peer pressure, he explained. Everyone else was doing it, so he just went along.

He said they'd planned to do other stuff, but not that many people showed up, it being on a Sunday evening and all, so they just decided to... to.... OH, I can't even type it!