Honestly, I'm embarrassed to admit this since I just got that fake tooth replaced and was all, "Oooh, this one's so much better!  I'm gonna fer sher take good care of it forever..."

Part of the thing's allure is that it's nice and tiny compared to that whole-mouth appliance thing I had previously.

Long story short, it almost went out with the weekly trash.  I painstakingly rummaged through food scraps, coffee grounds, etc. and happily found it.  I now have tooth cases throughout the house in addition to my mouth!

Also this week, I finished reading My Dark Vanessa.  I'd give it a 3.5 out of 5.  It told a difficult and sad story well enough.  I usually enjoy these "forbidden relationship" novels for the psychological study.  Indecent, for example, was a fave and probably the reason My Dark Vanessa showed up in my recommendations.  But it was challenging to get through - blech, dark, and creepy.  Don't know if I would recommend it.  Now I'm reading something fluffy and light for contrast. 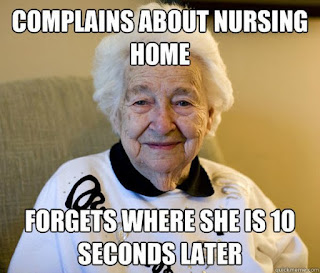 Admittedly, geriatrics is not necessarily an interest of mine.  I can't imagine that anyone wants to end up in a nursing home, but there they are.  More often than not, I feel relieved for them when they pass away.  And it will  only be a day or two until someone else takes their slot.  It's most difficult for those who have a full grasp of their situation, which they thankfully, sometimes forget

So it's nice to see these caring younger workers handling it all so well.

And speaking of young people, we swung by Wolfgang's yesterday for some cat-sitting instructions for an upcoming fun trip of his.  He was convalescing after his second hit of COVID vaccine.  Achy, blah, with a headache.  From my small sampling, I've observed that younger people in general seem to have more side effects than older from the vaccine, whether Pfizer or Moderna.  My reaction was noticeable, but mild.  Yay for being in my 50's.

Happy May.  I plan to watch The Kentucky Derby later.

Old age in this country is cruel. We visited a "home" in Lillehammer Norway a few years ago. The difference astonished! Plus it was covered by government and taxes, no body had to sell their house and car to keep Mom alive for a few years. Glad you are liking the new position and i am sure they are grateful!
Wondering if you could get a spare tooth just for good measure!

My mother is still alive just. She has an awful life, although she's cared for beautifully, and of course this last year in lockdown has made if far worse as I haven't been able to see her, so now she doesn't know who I am. She lays in bed all day, never leaves her room, fed baby food and sees no one unless they are changing her. That's her life.

Glad you found your tooth!

Linda Sue, interesting thought on getting a spare tooth. I didn't think to ask and it's too late now, but makes good sense.

LLC Joe, "awful life, although she's cared for beautifully". I see that, and it's the "awful life" that gets to me.

I began a comment and it disappeared. It's Monday, I think I'll come back. Not a good start eh?