I took the dogs out first thing this morning, and they were looking at me like, "Wha happened overnight?" 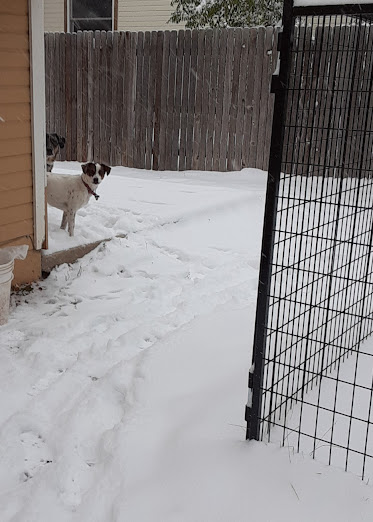 And there is currently about twice as much snow on the ground as in the pic.  The main happy dance around here is how this helps contain the various wildfires.  No, the snow won't put them out.  In fact, I'm sure plenty of the snow melts and evaporates before it even hits the ground near the fires, but it will certainly help slow the spread.

I was at work yesterday, and one of the cooks got a notification that the East Troublesome fire was approaching the highly popular Estes Park YMCA camp.  We all commiserated our special memories of the place and crossed our fingers that it would be spared.  The camp is the area where we spent the first part of 2016, 'member? 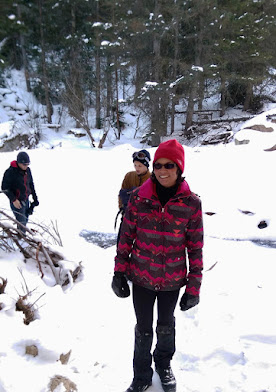 We were there in the wintertime, but it's even more popular during summer months for its access to outdoor recreating in Rocky Mountain National Park. 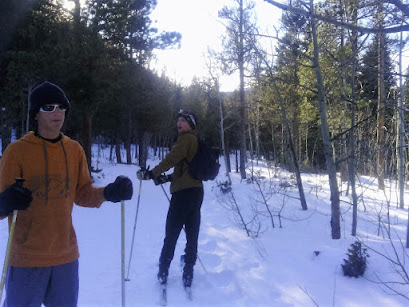 The fire is also burning up areas we were just at this past August. 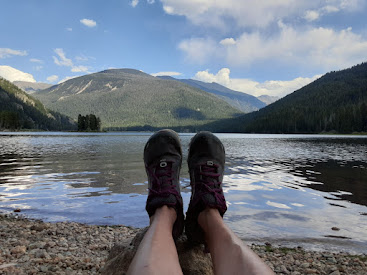 As of this morning, the camp has not suffered any fire damage 🤞 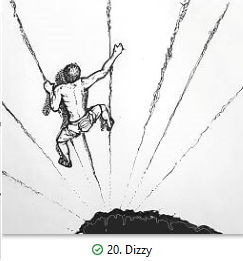 In other silver liningness  news, this felt like a pretty busy and productive week.  As such, I didn't get much inktobering done at all, other than one quickie: 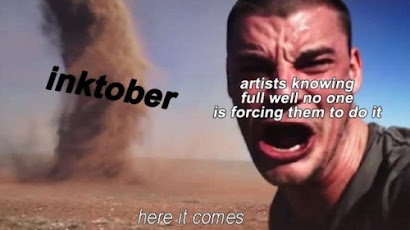 Chaco and Wolfgang stopped over last evening.  Chaco treated us all to Thai takeout as a sort of acknowledgement of a new work position he just started.  Meego was out of town with some friends, so missed out.
I think I've now had 5 Covid tests.  They're not getting any more comfortable, but they remain negative.  I  normally like to stay positive, but in this case,  no.
Better go shovel.
Posted by Abby at 12:58 PM

already? Is snow unusual so soon? 2When we were young we used to go to Estes, but then it got peopled so we went elsewhere. Beautiful area, LOVE love LOVE your inktober art! Simply fab!!!

Linda Sue, this isn't typical. We don't usually get our first snow until around Halloween, and then it's usually a trace that doesn't really stick. Estes Park, like a lot of nice places, has become "peopled". Thanks for the inktober support :)

Negative is good with Covid.
I would hope the snow would help the fires. I just hate all those.
Have fun shoveling.

Sandie, ugh, I shoveled so much snow! It snowed so much, the schools and colleges cancelled online classes - whaaat??
It has helped with the fires, thankfully.

I was just going to write well, this must have helped the fires and I see that you wrote that. Hey it's pretty from here, I just don't want the snow here. :-)

We got snow too! I didn't know it was coming so early either. Not as much as you got, but still snow..all..day...long.

The state is offering to test all employees to take part in community sampling. I declined. I already told her I had a negative antibody test and I don't go a lot of places. Plus, I don't live in Missouri, so I wouldn't really be part of that community.

Do you get tested for work?

Peggy, yep, it's really helped the fire crews take a breather and assess, but the fires will flair up again as the snow melts, the fat lady has not yet sung.

Morgan, we'd been so dry all summer, the ground is soaking up all this moisture!
Everyone at work was required to have a negative Covid test two weeks prior to the start of October. And since then, we've been testing voluntarily each week as part of a study coordinated by the university.