Well, I'm not going back to make up lost time, just gonna show up late to the party.

There's the Inktober challenge - a drawing a day, everyday for the month of October.  Last October was my third attempt and first success.  I put my pens and my feet up afterward and haven't drawn a darn thing since.

A few weeks ago, Wolfgang tipped me off to #Inktober52.  The powers that be wanted to keep the drive alive for a full year's worth of prompts; one prompt per week for 2020.  Oooh, that sounded like fun.  Then I proceeded to not draw a darn thing. 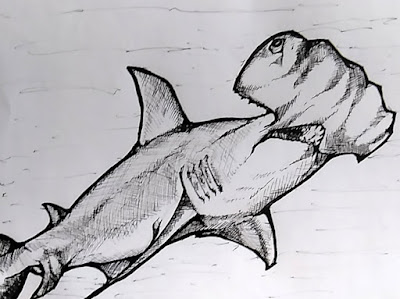 But hey, January was busy!  What with settling into a new town and new house, selling the old house in the old town, January 2020 is pretty much a blur.  I felt the dust had settled enough, and I'm a month fashionably late this week, where the prompt is "hammer".

In other being-lazy news, we've been watching the TV series "Fortitude" on Amazon Prime Video.  Seen it?

It was reported that some waits were as long as 75 minutes.  This surprises me, not only because of the packed conditions, but because Vail is EXPENSIVE.  In fact, I remember reading an article that put Vail as the most expensive place to ski in North America. The cost of just a lift ticket for a day is $209.  Part of the reason for that, I thought, was to keep lift lines short.  I know there are season passes and discounts for buying tickets in advance, but it's still pricey recreation, particularly at Vail.

So who are these people packing in at Vail and distributing cash all willy nilly?  Is there a maximum occupancy for a ski resort mountain?  Oh well, more power to 'em.  I was not part of the mass, but was rather down in the lowlands.  With a snow shovel in hand.

Maybe when I win the lottery.

75 minutes is a long time if just standing in the cold to me. I used to like skiing but I have to tell you I don't think I'd have done that in my hey day. After I took a fall, NOT on the slopes, and had to have several back surgeries I only now cross country ski. And now I live in an area where I go to bed fine now and wake up with a sports injury, I fear what would happen to me if I did take more risks. :-)

Forget that! I do not like skiing but I would never stand in a line like that for anything! It would be so cold just standing there! UGH!

I have to tell you that I watch The Bachelor (and waste my time - except I am spending time with my daughter). The commercials are shocking me. Just shocking me - as to what is normal anymore. I don't need to watch Fortitude - I bet it is way over my comfort zone.
I am a bore I guess.
And I would love to go skiing - having done that in decades - no mon no fun!
sandie

Oh wow that photo does not make me want to ski. I don't like being out in the cold for too long so I don't really ski. I'm more of a hang in the lodge kind of gal. I should check out that show on prime. I need something new to watch.