Yesterday, I was headed home after a few errands and noticed the sign at the church near the high school: 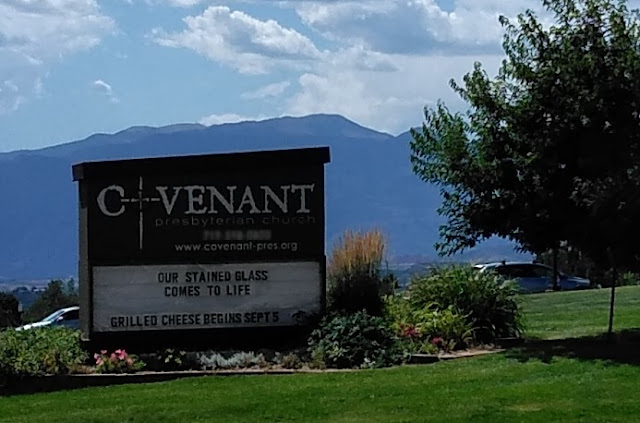 Several years ago, this church started offering grilled cheese sandwiches on Thursdays during the high school lunch periods.  It started out as something for the few kids who needed a break from the high school scene but maybe didn't have money or a car for a decent off-campus lunch.  A woman at the church thought it might be a nice bit of outreach since the church was so close to the school, so she volunteered to make a few grilled cheese sandwiches once a week.

Word spread and now EVERY kid and staff member know of the deliciousness.  Each of our kids has partook during the high school years and each has described the yum of church grilled cheese.  It's to the point now where the church coordinates teams of volunteers to make and serve during designated lunch periods.  There is still no charge for the food - they also offer cookies and such, I'm told - but kids often donate what they can.  It's open to juniors and seniors because underclassmen aren't allowed to leave campus for lunch, but c'mon, we've all been high school underclassmen who've "ditched" at lunch.

There's no proselytizing on grilled cheese Thursdays.  Sure, kids can ask questions about the church and programs, but it's really just about outreach.  I think that's a nice thing.

With school being back in session, no doubt some students were wondering, "Where's the cheese?"
Well, there ya go.  Nice of them to post it on their sign.

In related news, as part of my vegetarian adventures, I made an attempt to create some veggie quesadillas as yummy as the ones I had at Fuzzy's a few weeks ago. 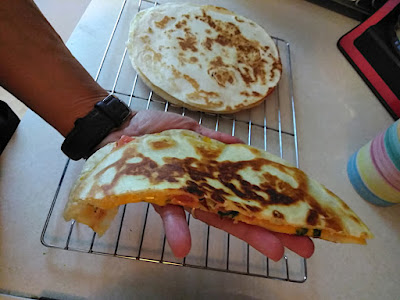 I was pretty happy with how they turned out, but they needed more veggies.  They're not quite up to Fuzzy standards, but next time!

I love that the church does that. And grilled cheese are yum! Your quesadillas look delicious!

What a great idea that church had- think I will tell mine about it.

Vegetarian?!
One of my daughters, Girl #3 is a vegetarian. Girl #1 doesn't eat pork, beef, or any poultry other than chicken. I'm learning dishes from her, but she's moving out in a couple days. Oh well. I think I witnessed enough to be inspired.

Morgan, apparently the church grilled cheese are exceptionally good. They use lots of love and butter :)

Chatty, that'd be great if your church got on board. This church averages about 400 grilled cheese on Thursdays now!

Anita, hey stranger! A long-time vegetarian friend of mine recently unexpectedly died after a medical mishap. She'd been mentoring me on making the conversion, and since her passing, I'm inspired to do it right. Seems to be a common thing with our kids' generation (not my kids though!)

What a cool story about this church!
Are there bad quesadillas? These look good to me! I find if I grill the veggies or however you like to soften/cook them, then add them it is even more flavorful. Grilling brings out such sweetness sometimes in veggies and then with the cheese of choice. But hey that's just me. I think any wine of your choice will be perfect. :-)

Peggy, you're right about grilling the veggies first. In fact, the item at Fuzzy's is "Grilled Veggie Quesadillas". Good stuff, even though it's franchise food... unlike church grilled cheese.