I've got some doorbustin' to do in a little while, but I'll give thanks for an all-around good Thanksgiving week.  Both fun and productive!

In addition to Thanksgiving, Magnum and I both turned it up the age count.  His birthday was Friday, and mine was on Tuesday, with Thanksgiving falling in the middle so the whole country could celebrate us!

As mentioned, the Turkey Trot was bunches of fun.  There really was a five-guys-dressed-as-a-school-bus.  See? 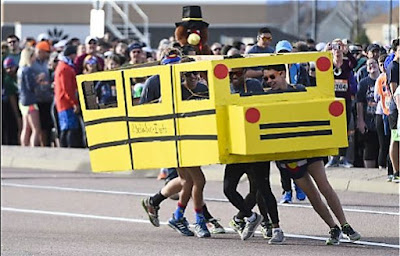 That's one way to get your picture in the paper.  I'm not sure what place it/they finished or what relation it served for Thanksgiving, but they seemed to be having fun.  As for me, the results did eventually update, and I became myself again rather than a nameless and homeless male of no age.

I took 2nd for my age group, and when I looked at the next OLDER age group, there were three women there who beat me.  I recognized a couple of names, and yes, I've eaten their dust before...

Speaking of eating, we spent Thanksgiving at Magnum's sister's, and it was a good time.  Chaco brought his girlfriend to meet the fam, so she was in a bit of a hot seat.  But I'd told her prior that everyone is pretty chill, plus there would be a 5-month old baby there to grab all the attention anyway.  The little guy did a good job of it, and I think GFchaco had a nice time.  She's cute and fun and I'm not quite sure how Chaco swung that ;)

Meego went shopping with his girlfriend's family for Black Friday.  They came by the house to get him, and he wanted me to come out and meet them as he's only been with this girl a short time.

I actually know her mom as she's an active band volunteer, but I didn't know the girlfriend that well.  I honestly "met" GFmeego only once during band camp when she had an asthma attack, thus freaking me out.  But she's talented and pretty and I'm not quite sure how Meego swung that ;)

Now I'm off for some doorbustin', but be assured I won't buy anything we don't need. 😛

Happy Thanksgiving and happy birthday to you and Magnum too! Congrats on your race! Nice sewing post too. You've been a busy girl :)

Happy Thanksgiving back atcha, Linda! It's been a nice break, now back to my unproductive job tomorrow...

It's amazing how babies steal all the limelight isn't it?

And Happy Birthday to both you and Magnum.

Thanks, Joey. And babies are the perfect little limelight stealers.

Happy birthday to you both! Lots to celebrate this week, and lots to be thankful for. :)
I managed to stay away from all the door-bustin’ this weekend, but eventually I’ll have to get out there. Need to psych myself up first....

I put the "bust" in doorbustin'. Didn't find a darn thing worth getting, but I'm thankful for that too :). Good luck!