Happy Thanksgiving, blog people! I will mention here that I am not one of those who refer to this holiday as "Turkey Day", and I have been known to inwardly judge harshly those who do, given my mood.

BUT it is a good reason for a Turkey Trot, and I managed to make it to the annual 5K event in my neck of the woods.  I hadn't turkey trotted in 3 years, so it was fun to get back into the fray.

It was a perfect morning for it. Sunny in the mid 40s, no real wind.  After a lovely rendition of the National Anthem, we were off.  Since it is such a popular race, we started in waves and I put myself in the second wave.

I'd been feeling a bit sluggish just before the race, but once the starter said "go", I got a surge of energy and moved to the front of my even more sluggish wave.

I eventually passed the 5-guys-dressed-up-like-a-school-bus that I'd had as my first target and was onto the next thing.

Shortly after the turnaround, I noticed some animated people in the corner of my left eye.  I turned to see Wolfgang and his three buddies, who must've arrived a bit late and started in one of the waves behind mine.  I was about to call out to them, but realized my lungs were  quite preoccupied, struggling to keep me alive.

So instead, I meandered over and gave Wolfgang a Ben-Hur-chariot-race elbowing.

Once he realized who the weirdo was, he sped up because no son wants to have his mom cross the finish line ahead of him in a Turkey Trot, late wave or no.

I made it to the finish, feeling I'd run a decent race.  I'm not certain, but I'm pretty sure that some dude was doubled over and actively vomiting right after finishing a few seconds ahead of me.  I kept on running for a little while...

I hung out in the aftermath and got a very nice freebie water bottle, which I actually was in need of.  Some people began to post race results near where I was standing, so I figured I'd try to find myself.  I'd been shooting for a sub 24:00 but didn't time myself, plus I was wondering how I'd done against the other old ladies. But I couldn't find myself anywhere in the results.

An official looking person (official looking because she had a bullhorn) told me that the "roster system" had gone down from some accident, so some of us didn't roll up.  She thought it would eventually update, but didn't seem real concerned.  So for now, this is me 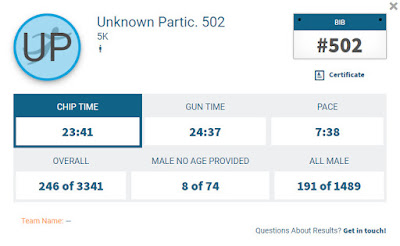 It seems there were 74 of us thrown into the Unknown Participant bucket.  No age, no home, but strangely, we are all male. 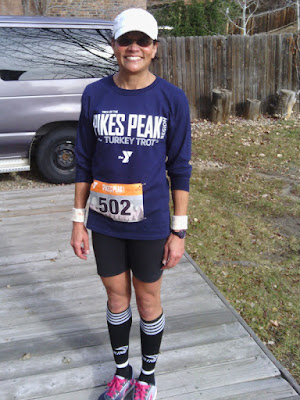 I won't hold my breath waiting to become a Turkey Trot somebody.  I did have Magnum snap a pic of me, making #502 a little less unknown.

And that's a turkey wrap of this race report.

Linking up with MamaKat this week
6. Write a blog post inspired by the word: accident.

Wow! You are already 20 times more productive than I was this turkey day. ;) Happy Thanksgiving!!!

Is it Thanksgiving today in the States? I have no idea. Anyway have a great time and well done for running and not having a heart attack. Enjoy your turkey.

Don't worry, I definitely made up for my productivity later!

Yes it is, Joey! I'm also thankful I did not have a heart attack, didn't want to upstage vomiting guy.

Well done Mr. 502! And that’s a pretty good time for someone feeling a little sluggish. I’m impressed!
I started my day hitting the snooze button for an hour. An HOUR! So much for getting a Thanksgiving Day workout before going to work.
Hope you were able to spend the day with your guys. I miss mine. :(

It really was a beautiful morning for the thing, so I managed to get myself to somewhat stop being a slug. And sometimes, you need an hour of snooze button!
We had a nice family gathering, all the guys and then some. Hope you get yours soon!

Kudos! Unknown or not, this is an accomplishment you can take pride in just for your own satisfaction.