the reason for waivers

It was hot and muggy.  We were in the home stretch - a couple hundred yards or so from the finish.  It had rained just before the race, but during the race, the rain stopped and the temperature went up while the humidity stayed high.  I was coming up on this guy.  He looked to be relatively young and fit, but I noticed he was running rather slowly and was soaked with sweat.  As I passed him, he sorta twisted toward me a bit.  I saw his face as it tilted upward and in my direction.  I saw his eyes roll to the back of his head.

Then he was down.  Didn't fall violently, just sort of crumpled.

This was years ago.  A 4-mile race at the place I used to work in upstate New York where it can get quite humid.  "Innovation Run" as part of "Innovation Days".  Our company took up a large amount of area, and the race ran around the complex.  It was just a bit of fun, not heavy competition.

Luckily, the guy collapsed right near the finish, so plenty of responders were right there.  He just overdid it, and the humidity got to him.

The other night, I went to the healthy grocery store to get some healthy things.  In that same shopping center is a fitness club / gym / whatever they're called these days.  The place has big windows out front so, after dark, you can look in and see people doing their gym things.

So as I was heading out to my car, I noticed lots of activity outside the gym.  An ambulance and fire paramedics.  Personnel going in and out.  I was very tempted to do the rubber-necked drive by, but instead did the responsible thing to give the emergency crews their space.

I assume someone overdid it at the gym.  Heart attack?  Stroke?  Dropped dumbbell on the foot? 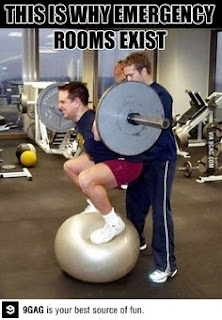 Not too long ago, Wolfgang and some friends were at a climbing center.  One of his friends was on the slack line and did a bit of a hurkey doo and ended up with his kneecap on the side of his leg. *CRINGE!*  But he was young and durable and healed up quickly enough.  Still, the paramedics were called.


So I don't know what happened at the gym.  Older person have a heart attack?  Younger guy twist something the wrong way?

It got me thinking about these public emergency medical situations, arising from over exertion and such.  I'm glad to say that, other than sweaty Innovation Run guy and a few barfers at the top of The Incline, I haven't witnessed many such  situations.

Have you ever had to help a stranger in a medical situation arising from having too much "fun"?

I haven't seen much like that, thank goodness, but my husband got overheated and dizzy at a trampolining place once. It was scary because it looked like he was gonna pass out, but he was ok after a couple of minutes. Love that image you posted, ha ha.

Have you noticed head wounds usually look a lot worse than they are because of all the blood? Usually.

Well, glad he came around! I guess if he did actually pass out, he would probably have just softly bounced?

YES! I guess our heads have lots of blood vessels. The slightest nick and gush city!

No. Can't recall seeing anything like that. Oh wait... When I was about 8, I watched my friend's mom ski into the beach, stop suddenly, and land on her face. Freaked me out. I don't like seeing stuff like that. Even still.
The gym I go to is full of old people. I hope never to witness anything there.

The last time I was involved with a 911 call was at work. Someone passed out in the waiting area. I was on the phone with 911, and the lady who went down was on the floor on the other side of a high counter, so I couldn't see her at all. Fortunately, a doctor happened to be right there! I asked him to please answer the operator's questions for me, like, are her eyes open, and is she having trouble breathing. Unfortunately, he refused to give me any straight answers! He was afraid of his liability if he gave wrong information. Argh! Anyway, it was a seizure and in the end she was fine.

I don't like seeing that stuff either. Good luck at the gym!

Scary! Funny thing, if he wasn't a doctor, there'd be no problem with liability.

Thankfully, I have not witnessed anything of the sort. I'm not sure if this is luck, or if I've not spent enough time in environments where fitness activity is the main focus. Being an early morning gym-goer for the past several years, I tend to be amongst a light crowd of responsible fitness enthusiasts who, for the most part, seem to know what they're doing.

Also, I don't do well around barf.

Ha! I hadn't thought about it that way :)

Y'know, heart attacks are much more likely in the morning...
Unexpected barfing grosses me out, but the Incline has a barf environment similar to a high school kegger.

The guy collapsing must have been a bit scary to watch! I can't think of a time like that, other than a couple years ago an elderly woman collapsed outside of a restaurant. I don't think it was because she had too much fun though. Her family was with her and we called 911 for them and did what we could to help. I stay away from gyms, so no chance of seeing collapses there. If anything, I would probably be the one collapsing.

That guy was pretty freaky - running one minute, and literally sleeping the next. I think I would feel more distressed if it were an elderly person, because it's more likely to be "the end".