I just got back from collecting the rest of my P.E.O. presidential stuff.  Magnum says, "It takes that much crap to be president?".   Psshhh, I hope not.  I think it's mostly stuff that gets passed down from prez to prez, and no one's felt comfortable enough to chuck it. 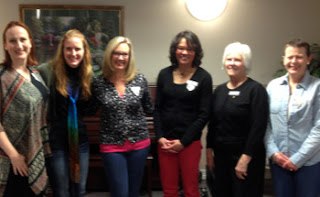 From a lack of any other imagery from this week to share, this is a top secret photo of the new officers, taken from our top secret underground bunker.  I've purposely blurred the image to protect the top secrets.

On the far right is Running Sue.

But enough of that.  Magnum and I splurged on a Chromecast last weekend (They're 35 bucks).  I remember seeing them when we went on our annual Thanksgiving night shopaholic trip to Best Buy.  Then Chaco got one a couple months ago and had been singing its praises.

So we got one.  Magnum was concerned that it's yet another laziness device, but I say replace "laziness" with "time saving" and POOF, it's all good!  I like it.  No more having to boot up the chromebook, hook into the TV, sit uncomfortably on the floor while setting up the Netflix.  Such hardship that was!

Then we watched Spectre.  Not via the Chromecast, but a DVD.  It's the latest James Bond and the last for Daniel Craig.  It was a typical James Bond movie, but I do like me some Daniel Craig.  And Christoph Waltz, who plays such evil yet likable characters.

This was a pretty productive week, and we are still enjoying springlike weather, which was nice when it started, but now everyone's all, "We need water!", because we do, seriously.  In the meantime, I'm trying to make the most of it.  I've been enjoying the use of Alice, my fast, fair weather bicycle.

I use the mapmyride app for tracking my rides, and Alice helped me earned a "fastest time" badge on one of the courses this week.  So while it was nice to gain that recognition, I'm thinking:

But I'll enjoy it for now until someone knocks  me off my pedestal.

Have you noticed when you see any group photo there's always one person who knows how to pose for a camera. They angle themselves to look at their best, and have photo posing down to a fine art? I've never mastered it but the woman next to you on the left has. :D But then you get the natural looking one that doesn't need to pose and still look good. That's you.

Yes, her photogenicness is one of her many secret skills. And thanks, I'll take the "natural" comment as a compliment. The blur feature helps :)

"modern and techy" sounds better than "lazy" too!

We love our chromecast. Well worth the splurge.
Once you get done with the PEO presidency, wanna run for the real one? You don't have to do much. ;)
I use map my run when I run. It's good and bad. Good because I like knowing how far I've gone and at what pace. Bad because I'm always in competition with myself. If I want a nice, leisurely run, I have to go without it.

Ha, maybe I can seek a higher office after this term is up. It's all pretty much the same stuff, right?
I use mapmyrun too, but I log it after the fact because I don't like carrying my phone with me when I run. Plus, yeah, it would always be a race!

You should write reviews. That is a good summary!

Is Running Sue on your right? Or ours? I'm not sure why this matters to me, but my eyes moved back and forth from your right to my right, and now it's bothering me which one is Running Sue?

I've got a vague sense of what a Chromecast is. I'm sure my hubby might want one if he learns there is such a thing. Since I generally use the t.v. for background noise or as a means to fall asleep (except the rare occasion when I'm binge watching something on Netflix,) I can probably do without one. Glad you are enjoying yours though.

James Bond movies all kinda look alike to me.

Ah, I see the confusion I've caused! Running Sue is on YOUR far right, my far left. I can live without Chromecast, but now I don't need to :)