I find it funny and a bit ironic when newscasts encourage people to not go out in bad weather, and they do so by reporting from out in the bad weather.  Those reporters all bundled up and getting tossed around by the wind, or pelted by rain or snow.  Such sacrifices for their jobs. 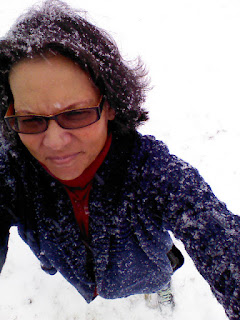 That said, I offer this report.

Yes, the big snowstorm that the weather people were all a-flutter about this past week arrived.  I'm feeling the cabin fever as it kept me home all day yesterday.  But at least I finished my conclusion.  Is that redundant?

Thankfully, I got out for a nice run in the morning before the flakes started flying.  It was fully overcast, but about 30 degrees and QUIET quiet.  The genuine calm before the storm.

Then the roads got all messy with multiple slide-offs and such.  On Friday, I talked a bit with Wolfgang who was sort of lamenting the fact that he hasn't gotten to test out the  new snow tires he recently got for his truck.  He was in sunny warm Hawaii during our big snow of Thanksgiving week.  Oh... the hardships.

But today looks a little better... a little.  I hope to get out in a bit for some errand running and general escape.  I don't like to shop on the weekends, but maybe after the Bronco game starts, the crowd will thin.  Yay for football fans.

This was a productive week of finishing up the semester, so I'm thankful to be pretty wrapped up with two more classes.  Meego has finals coming up this week.  They have two finals a day, then afternoons off.  The e-mail says...

Students should use the time to complete make-up exams, seek
individual tutorial time, or to study for exams.

He just laughed, like I was just messing around.

Beware the nerd mom with some time on her hands.  MUAHAHAHAHA!

Looking at your photo, I've decided not to moan about our rain here in the UK. At least we don't have snow ... yet. Stay warm!

I never understood those weathermen either...
Not sure I like seeing you in snow. We've had spring like temps this past week, and I've become quite used to it. If that snow's coming my way, it's gonna be a tough adjustment.
I can't believe Meego wouldn't want to study with the best tutor ever! Actually, yes I can. He's probably out finding you something to do to stay busy as we speak. ;)

I try to appreciate the snow because of the economic boost for our state. Plus the all important spring thaw. But I would like to be somewhere warm and sunny and snow-free right now.

We broke a record high temperature last week, then the snow and cold arrived. Mother nature is one moooooody woman!
I hope Meego comes up with something fun :)

Is there an award for the weather reporter who comes closest to death without actually dying each year? It would explain a lot of there was!

LL Cool Joe - how much you complain about the rain depends on where you live, I guess. I am in Kent, so we have only had drizzle for weeks, while my son was stranded up in Lancaster for days in a town with no electricity.

Maybe that's it - closest-to-death awards! Or maybe they get extra hazard pay? "Only drizzle for weeks" would drive me up a wall. You should get an award.

I love that QUIET quiet, and sometimes I love the quiet after the snow has fallen but before everyone has started attacking it. Though if I had my way, I'd just skip the snow altogether. I guess I better brace myself for the cold and snow coming my way. Congrats on getting through the semester!