the super duper half

"No snow, but it's gonna be chilly!", he said in his sexy Scottish brogue.

This guy that works at the running store up the road.  He sounds just like Mel Gibson as William "Braveheart" Wallace when he speaks.   Looks nothing like him, though.  Anyways, he got me all registered for the Super Half Marathon last week after I  committed myself to do it.  By then, it was close enough to mostly believe the weather forecast and bank on the event not being cancelled.

Sunday morning, I got dressed, assuming we'd be in the teens by gun time.  A light liner under my (Broncos?) orange running top, the awesome tights, a (Broncos?) blue fleece neck gaiter, and to top it off, the Mickey Mouse hat and some gloves.


As anticipated, it was about 14 degrees at race start.  Check-in was actually indoors at a plaza downtown, so that was nice.  I stood in the line to get to the line to the women's restroom for several minutes.  Someone mentioned that there were port-o-lets outside.  Yeah, riiiight...

Some of the others looked pretty serious with their high-falutin' gear.  Some looked overdressed or weighted down with various Camelback packs and water belts, etc.  There was a small friendly brass and percussion band playing some tunes at the starting line.  They were students from a local high school - how nice of them to show up and play in the cold!  Some members of them sang the National Anthem, nicely done.


It was no surprise that the entire course was mostly covered with packed snow.  I hadn't really done any warm up, figured I'd use the first part of the race for that, so I set out at a light jog   About a mile into it, there was a beer station.  Not a water station, but some spectators with small plastic cups of beer.  They had funny Superbowl outfits on too.

I declined the beer offering.


At around 5.5 or 6 miles, the packed snow became a swamp of loose mucky stuff, unseen by anything but running shoes.  I'd seen several people walking around with Yak Trax or the like on their shoes and felt that was overkill.  Now I was thinking how nice it would be to have some!

My tractionless minimalist shooz and I plodded on, however.  It was work, but we were all in the same boat, mainly concerned with remaining upright, let alone with moving forward.  One wrong foot plant could mean a twisted ankle/knee/hip and the end of the race.  I was glad to make it to the turnaround point, knowing I had made it through half the snow swamp.

Then it was just a matter of retracing the course.  Temperatures stayed right around 20 degrees.  Having not run this far in a while, my mind began to get bored.  Yes, it's a physical challenge, but not exactly "action packed".   I wished there was a way to put myself on auto-pilot, wake myself about a mile before the finish.

This shot, taken at about the 10-mile mark, made the event gallery.  See?  How bored I look?

But really, that's my own challenge.  Bottom line, it was a lovely day, the atmosphere was festive - before the game, remember!? - the volunteers were great, and the encouragement from spectators, whether they offered beer or not, was much appreciated.  A few shouts of "I love your hat!" and little kids with cowbells - what's not to like?!?

Eventually, I made it to the finish chute.  I heard my name over the PA:  "Abby Normal from Colorado Springs!", and the crowd went wild! 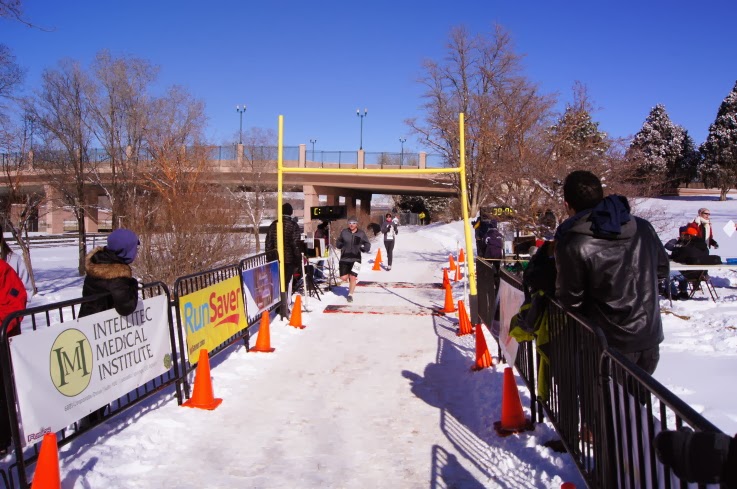 ...Oh, it turned out to mostly be some nearby geese.

I passed under the goal posts to the makeshift end zone, happy with my finish time.  One guy turned around and went for seconds.  He was using the Super Half as a training run for an upcoming marathon.  I felt okay at that point, but the thought of repeating the whole thing?  Right then?  Ah, HAIL no!


As I continued beyond the finish, a small boy of about eight years old handed me my beer mug.

I broke it in with hot tea instead.

14 degrees? You're a trooper! (Oh, I know you warm up substantially once you really get moving.) Congrats on another successful run!

It really didn't feel that cold, especially once we got moving. One woman I talked to afterward said she turned around at mile 5 because she was too cold, but then she said she was from Las Vegas. I guess it's just what you're used to, which means I bet YOU would handle it just fine!

You got bored? How does that happen? Maybe a beer would have helped? :-)

Congrats on a good run - wonder what you can do in good conditions...

I bow to your awesomeness! Love the post race synopsis. You are definitely way more hard core than I am - it's hard for me to picture running in those temps. I guess I won't complain anymore about doing my little street run in the mid-30s. Still, I imagine running with clear skies on those frosty streets must have been great I still think the hat helped. That 10 mile picture is great! I have never been happy with my race pictures - I usually look like a fish out of water. You don't look bored, you look focused.

BTW - I totally get the bored part - you get in a zone and tune out everything (left foot, right foot, repeat). That's why I crank the ipad along the course.

Yes, the beer! To clarify, the boredom didn't really kick in until maybe the final 20% or so. Up 'til then, I was still wondering if I'd make it!

You're too kind. With a little acclimation and a furry hat, you could handle it, no problem!

The boredom was a bit surprising, and it didn't kick in until late. Because of the distance, this didn't have as much of a "race" feel that I'm used to, more like a group run - not much strategizing and constant assessment.

I still don't like to wear earbuds when I run outdoors, and actually they weren't allowed for this race (although I spotted a couple of rebels!).

I get bored running long distances at home, iPod and all, so I get how you feel. I suppose, since my half was through downtown St. Louis, I had enough to look at and experience that I didn't get bored. (I, too, like to run races without earbuds.)
Congratulations once again on a terrific race! Are you hooked? I can totally see you running another one once the snow melts...

Boring or not, great accomplishment -- especially for being so spur-of-the-moment! Coulda been even more boringer; coulda been on a treadmill....

14 degrees? No, thank you. I wouldn't leave my house in 14 degree weather, let alone run a half marathon! You're either crazy or awesome! But either way, I dig that about you!

I'm laughing at the fact there was no water, but beer, at the first mile marker!

"we were all in the same boat, mainly concerned with remaining upright, let alone with moving forward.  One wrong foot plant could mean a twisted ankle/knee/hip and the end of the race.  I was glad to make it to the turnaround point, knowing I had made it through half the snow swamp." --- YOU TOTALY ROCK!

And your "bored" expression is absolutely priceless!

We were on a hiking/biking trail, unlike the Big Shows that you and Agg have done. And it was an out-and-back course, so no new scenery. Still, I don't think boredom is inevitable and would like to conquer it! I won't say this was my first and last half marathon, but I don't really plan these things in advance :). I do have my geese fans to consider!

I remember hearing about someone from Alaska who qualified for the Olympic marathon (maybe?) by training on a treadmill. THAT's discipline - more power to 'em!

Those beer slingers were a hoot, should've seen their outfits. You would too leave your house! I've seen your awesome snow-shoveling ensemble!

Dayum you're dark!! I can understand why you weren't smiling. Lips freezing to the gums can't feel good. You're slim, trim, muscular, and fit. I'm all the opposites, but if I ran I'd break a hip.

14 degrees?! That's like another world out there. You'd think I live in southern Florida instead of Virginia. I get the warm up from the running, but the women handing out the drinks - some missing hats, gloves... and one wearing leggings. Sheesh! They don't appear to be shivering.

Anyway, nice shot of you in the race! Glad you got some pub.

It's true, I'm no peach.
And you lie about yourself. I've seen you in your sleep study lingerie.

My thoughts exactly on those water women. And that water was like ice! Same was true for the band kids - out playing their instruments with no gloves to hamper their dexterity. I guess it was all part of the fun!

Congrats! I don't blame you with the beer. The last thing you feel like drinking in freezing temps is an ice cold beer.