Baby, it's COLD outside!

The last few days, the meteorology people around town have been all a-twitter about this Siberian storm front headed our way.  It's here! 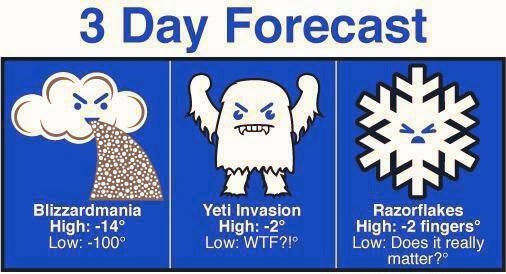 My weatherbug shows the temperature as one whole degree F.  Wind is 20mph.  That equates to a windchill of freaking cold.

So it was back on the bus for me this morning.  I arrived at the bus stop in all my bundled glory to find a large grocery bag full of a variety of snack bars sitting on the bus bench.  Was that left there intentionally or by accident?  I like to think that someone purposely left it there for bus rider freebies.  Still, I didn't take one - candy from strangers and all that.

Once on the bus, a woman I've ridden with before sat bundled.  She's also a student at the university - computer science.  Last time I rode it was snowing and she was singing "Let it Snow" at the bus driver's request.

She actually has a very good singing voice.  When I first climbed aboard and heard it, I thought it was the music streaming through the bus radio.

"You're not going to sing to us this morning?", I asked her

She covered her face, a little embarrassed, and said, "Well, the weather outside IS frightful...", but didn't break into further song.

Instead, we went into a more geeky conversation - she all computer science, me all engineer turned math teacher.  It occurred to her at one point that "Next March, we'll be able to celebrate a whole pi month instead of just pi day!"  Simple nerd pleasures, I can hardly wait.

For the ride home, I glanced out toward the bus stop from a windowed area in the University Center.  A woman in a motorized wheelchair was also there.

"Yes, is that the one you're waiting for?"

"Yeah, except I don't want to go out there because it's snowing and I'm in a wheelchair with no gloves and things are about to get real with this weather", she perceived.

I made sure the driver waited for her as things had gotten "real" since the morning.  It's snowing harder now, and sticking to everything.  I've shoveled the driveway, but you wouldn't know it.

I think the changes in atmospheric pressure are making the animals stranger than usual too.  My plecostomus, Jansen, has stopped his usual cleaning routine.  I got him a couple three months ago when it seemed that the fallout from the fishtank apocalypse had passed.  He went right to work and scrubbed that place clean.  But now, all he does is hang out with his fins up on the heater.  Drinking beers.

My aquarium thermometer shows happy temperature, and I'll note that I keep the thermometer at the opposite end of the tank from the heater.  Yet it's as if Jansen's gone on a one-fish union strike.  The algae is getting the upper hand.

Then there's the cat: 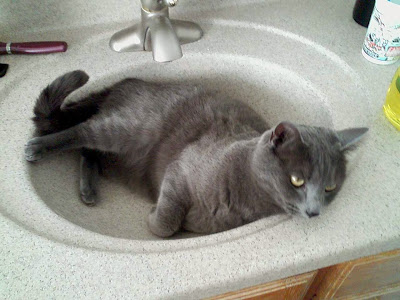 What does he think that is?  A heat sink?

"Heat sink" Good one! Only an enginerd would come up with that.

I thought my 25deg run this morning was about as cold as I care to go -- and it's a wet cold here! No snow or wind, though, so nothing 4 layers couldn't stave off.

Looking forward to pi month next year. And just think, the year after that we'll be able to celebrate to two more significant digits (well, except for the rounding error--which will be resolved on the following year after that). Oh, so much to anticipate!

Your weather sounds very similar to what's predicted for our next week. We got a good bunch of snow today and more is on the way. Winter has announced its arrival, that's for sure.

You make the bus ride sound actually pleasant! I did not have similar experiences in my bus riding days so I've never been inclined to use that mode of transportation since the days when I had no choice - like 25 years ago.

Gosh, I hadn't even realized the pi parties to come. I guess I was just so excited for next year, I couldn't see beyond!

I think this is a big storm affecting lots of people. And it's not expected to go away anytime soon. You're one of those true Winter People. Got any tips??

I wasn't sure what to expect from "The Metro", but it's exceeded my expectations. Part of that might be because my route runs between the university and the boring northern suburbs. I know there are other routes where I probably shouldn't go!

Very difficult to live in very chill climate. Here it is cold now and i feel difficult to be because it is so chill...

That is a gorgeous looking cat!

We have a storm heading this way - apparently the storm surge will be similar to the one that killed hundreds in 1953, but hopefully our flood defences are better these days. Not looking forward to riding home in that...

It's sometimes surprising how it becomes more difficult to do *anything* in the cold.

Whenever a forecast cites a specific storm in history, that's usually not good. "the one that killed hundreds in 1953" doesn't leave much to the imagination!

And the "heated sink" cat photo is cracking me up!

Yeah, "crazy" being the operative word. I'm giving the cat a pass for that.

Your cat looks so like one of our cats called Pixie, who is sadly dead now. Is he a Blue Burmese?

We're not sure of his lineage, we just took him in when he was causing too much trouble with the other cat at his previous home. I agree that he looks very much like a Blue Burmese. RIP Pixie.

We usually get your weather a day or so later, just not quite as extreme. We had a high of 19 today and about 5 inches of snow. Seems balmy compared to you! I try not to think about this being 'just the beginning'.
Our cat sits in the sink to drink from the faucet. I wonder what's drawing Napolion to your sink?

What is it about Colorado? You're freezing, you're burning up (literally), smoking dope... You all manage to be on 6:30 news quite often! :) I'd still like to visit your beautiful state, but it'll have to be summer.

Good of you to look out for the lady in the wheelchair.

On Thursday (I think) we set a record for the "lowest high", a balmy 7 degrees. Get ready!
I have no idea why Napolion was in the sink. I think it was a ploy to be mentioned in the blog.

Oh, you are more than welcome to visit anytime! Come on out and we'll smoke around the forest fires!