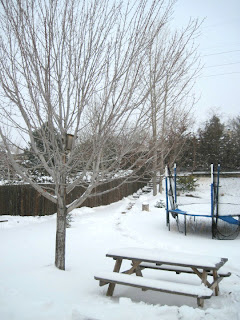 We're having us a snow day today.  This is good, we haven't had any appreciable snow since that storm in December that nearly left us treeless for Christmas.  And it's nice fluffy, friendly, February snow - unlike the sloppy, heavy, wet snows of April.

So I'm housebound with the kids and everybody's in good spirits because it's a happy day.  It's a snow day.  But Wolfgang is feeling a little troubled.  We had a bit of an incident this mornig that required some comfort on my part, and I don't know if I succeeded.  The incident was my fault to begin with...


He happily turned his radio off and went back to sleep after those two words - "snow" and "day" - were broadcast.  The day had started SO well.  Eventually he got up and took a (too) long, (too) hot shower.  Next, he was in the kitchen to prepare an awesome breakfast.  He put the frying pan on to heat, retrieved the butter, sliced up some fat slabs of bread, and...

"Doesn't the milk man come on Fridays?", he asked perplexedly

"Actually... *ahem*... the milk man and I broke up a little over a month ago", my confession came at a bad time.  I knew I shouldn't have avoided it for so long.

He was crestfallen.  "Do we have any eggs?"

"And you know you can still visit him - on Wednesdays and every other weekend at the Farmer's market!", as if that makes a difference!  "You just can't have french toast on this particular morning right now today..."

Did I mention we're low on milk too?

I know that man is behind this whole snowstorm!  I don't know how he does it, but it's just his way.

I'm so sorry Wolfgang had to find out this way. It's such a strain on the family when these relationships end. Their whole world has changed. The milk comes in unfamiliar containers. There's not a seemingly endless supply like there used to be.

Hang in there. It will get better. Trust me. I know. My peeps have even learned to start adding "milk" to the list of needed items that we keep on the magnetic notepad on the fridge.

Difficult as it may be, they will grow and learn from this painful experience.

Thanks Terri. Maybe we can start a support group.

Wow, just wow...I don't have any children yet but I always imagine what children go through when a relationship between a parent and a close family friend ends. It's a shame he had to find out like that.

Oh don't worry Shawnte. The whole "affair with the milkman" is just kind of a rolling joke around here. He never even knew the milkman, but he was pretty disappointed about having to forego the french toast!

Awww... I feel for him. I know what it's like to have your heart set on a particular food item and then not have it available when you're ready for it. Perhaps he can store some milk and eggs in his underwear drawer so he'll always know it's there when he needs it. ;)

Poor baby. To learn this harsh fact so young. I'm sure this will scar him emotionally for life. He'll never be able to look at another milk bottle without feeling sad. Hope you were able to restock the supply to ease his loss.