Ack, it's been a week. We're having troubles with our internet service. Really, the troubles aren't THAT bad, if we were just regular subscribers, but they're wreaking havoc on my online classrooming.

So, I've been on the phone lots with tech support. They probably see the caller ID, and think "oh crap, it's her again...", but geesh, who do I gotta sleep with to get a reliable connection around here?!? 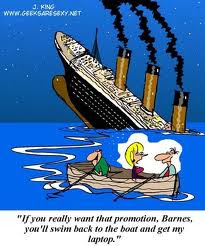 Anyway, we're switching providers. I think I've given the current crew - won't mention any names, but rhymes with "BOMB BLAST" - more than three strikes. They're out. New guys' time to shine. The switch happens on Monday. All this in the middle of a 4-week long online class. I've got a 2-hour online tutor session later this afternoon. I'm just hoping the ship holds together for that.

I wonder if the wives of the cable guys have these problems; cause it doesn't cost them anything to sleep with them. Or does it?

Hope your next provider has better service.

I was wondering where you'd gone off to! Just figured you were having one of your busy weeks.

Yeah, definitely time to cut your current provider loose. When they start messing with your ability to do your job, it's time to find someone new. Hope the new service works out great!

I've got the same provider, so I feel your pain. I just love how when the service goes out and you have to call it in, they always give you that peppy "you can set up your service call over the internet" pitch.

They're such a sweet bunch of people. After Hurricane Ike, where we lost power for 2 weeks (that means no internet), I mentionned that we should not pay for the time we had no service and the answer I got was "it wasn't their fault that we had no service". My answer was: Not my problem and I didn't pay. Hope you have better results with the new provider.

Like a lot of businesses, our paper depends a lot on servers and other online services to get everything done...couldn't imagine what would happen if we blinked out like that.

But we don't have Bomb Blast, so no worries there. Technology sucks some days.