how far off, I sat and wondered

Thursday night, I was awakened by... nature sounds?  In my grogginess, I thought maybe it was raining, and I was hearing soft drips from the backyard trees.  Then I remembered it was cold outside and our windows were closed.

Upon further awakening, I concluded the sounds were coming from the cat.  He was cleaning himself.  But then... he doesn't usually clean himself so loudly, so moistly.

At that point I debated on whether I even wanted to know what he was doing.  But yeah, of course I needed to find out.  I flicked on the reading lamp.

He was eating a mouse. SH*T!

We've spotted some mice lately, running around the yard.  It seems they've infiltrated.  On the one hand, I was all, "Yay, the cat's doing his job!".  And on the other hand, "Ew".

We had a similar awakening on Friday night.  We're sure he's catching the mice somewhere in the house, then bringing them to our bedroom as trophies.  Yeah, no.

Thankfully, last night was mouse free.  I'm hoping the others, if they exist, have gotten the message.  And I'm thinking it's highly likely there are more than just two, because when there are two... there are never just two.

And yes, we have mouse traps now.  And also, for this reason, I've deemed that we will always love and care for employ a family cat.  Napolion's badass. 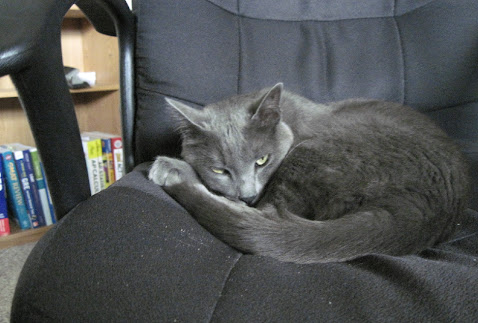 started humming a song from 1962 -
hey if you can do it I can too. I read the header and sang the next line. Somethin' is wrong with me. :-)
I am glad I don't own a cat. That comment stands on so many levels but this is at the top! But hey, you don't have mice. :-)

I've noticed that, since the Tyrant got rid of cats on the property, the lizard population is running amuck. The babies are cute, but the adults creep me out. I want the cats back.

It's nice when critters earn their keep.

Peggy, good job picking up the song lyrics :).
We are currently holding at mouse free.

BootsandBraids, most cats enjoy hunting and I enjoy the cat hunting!

Herb, yes, now if I could just get the dogs to vacuum.

Vacuuming dogs? Well, mine gets every crumb of food that's dropped anywhere.