My thoughts while listening to other runners strategizing before the start:  "Geez people, it's just a fun run.  Chill"

My thoughts while getting bunched up at the turnaround: "Move it or move aside!  Sheesh, this isn't a Sunday stroll!"

My local run club had our first race of the Tortoise and Hare season last Sunday.  Weather was beaut.  It was a short fast race - 4K, so about 2.5 miles.

Tortoise and Hare races are sort of "backward".  Instead of a mass start with finishers trickling in, T&Hs estimate everyone's finishing times, then we start accordingly.  Slower runners start first, and several waves of runners follow.  We are spaced at 30-second intervals.  If the estimates are accurate, we all finish at nearly the same time.

It usually works out quite well, the club's algorithm for predicting finishing times is based on previous T&H races and has proven to be pretty accurate.  My start time was 20 minutes into the race, and a few speedster waves started after me.  We were pretty bunched up by the halfway point and continued to take on mass toward the finish.

The club does a T&H each month from September through March, supposedly to keep people running through the winter.

Here's the start of my wave, all of us looking a little bored? 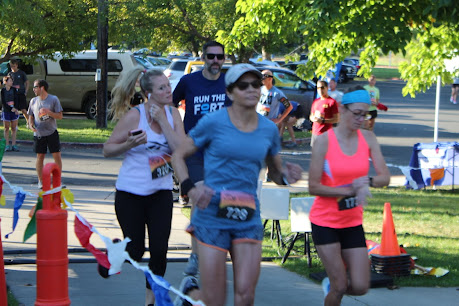 It was fun to race again with a good turnout.  Next month is a 10K, just in time for Halloween.  Hopefully it won't snow.

I love that you love running so. I never understood it. My high school boyfriend ran as part of his baseball training. He would always want me to go with him. We would use an ace bandage to bind my boobs (before sports bras) and I'd go but I hated it so much. He would tell me he'd get into a zone/zen. I just wanted to cry each time and with each step I'd say only 50 more minutes, only 49 minutes etc.
I did this for 2 yrs and then begged to not go again. He was not happy with me. I asked him to come to Pilates for me. Touche he said and from then on he never bothered me. But I wanted to like to run. I wanted to get to a place that made it feel so freeing and good. I don't know what I did wrong but now I feel like unless I'm being chased, I'm not running, even in a sports bra. :-) I wanted to look happy (ok no this pic) like you always do!

well somebodies got to love it, keep the running shoe industry alive. Skipping I understand, running not at all. I guess it is a personal challenge, like anything really.

Peggy, good for you for going with him - "strapped down" and all - for two years! I've enjoyed running ever since I learned to do it, it seems. Don't really know why, and others have told me it's drudgery for them.

Linda Sue, it does keep the shoe people pretty fat and happy.

What fun! You're lucky to be a runner. I've always wanted to run, even when I was young, but could never manage it. Walking is my forte.

BootsandBraids, I do feel lucky to still enjoy running and am glad the club does these fun events. Walking definitely has benefits - keep on!

My older daughter is doing a run for charity next weekend, and I'll be watching her. Lol. That's my level of involvement.