I happened to catch the first episode, and it really drew me in.  I think the casting is super well done.  It deals with people at a wellness retreat - to become "better".  There are drugs involved, both as addictions to escape from and as to use for wellness treatment. 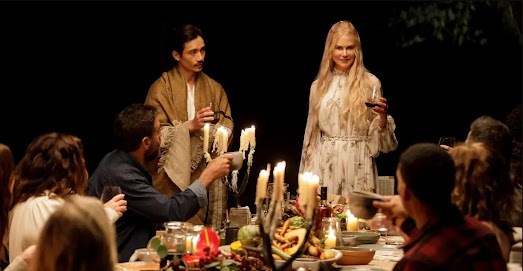 So... what's the difference?

A friend recently told me that she's addicted to smoking weed.  She's determined to stop, not to get over her dependence, but because she knows the smoking is bad for her lungs.  She's developed a noticeable phlegmy cough.

She says the pot helps to calm her thoughts.  She smokes before going on walks with her dog, and the smoking-walking routine is rather therapeutic.  She's tried edibles and infusions, but apparently she's developed such a high tolerance from the smoking that no other form works for her.  If something other than smoking did the trick, she'd switch in a heartbeat.

I'll note that she is about my age, has a stable marriage, lives comfortably in a suburban home, has a good relationship with step-kids in their 20's, is productive at her profession, is very sociable and well-liked...

She told me she's considering hypnosis to kick her habit.  She doesn't want to go to rehab because of the stigma of, "I went to rehab".

When she said that, admittedly, I did think, "Wow, rehab?  It's that bad?"

So I'm watching Nine Perfect Strangers and wondering what that would be like.  Would I cope okay for ten days?  With no connection to the outside world - no news, no internet, no contact with friends or family... no alcohol, no caffeine?

Sure, I could do ten days.

I've gone to weeklong meditation retreats where there was no news, no internet. Only activity available was meditating and walking. It was so relaxing that I hated for it to end and have to return to the hustle and bustle of the world.

I don't have Hulu so I haven't heard or seen that series. It does sound interesting though. I think I could go 10 days without family, friends, etc., only if there were lots of things to keep me busy. I think I would be stir crazy if there was a lot of time for meditation and the like :)

ten days of deprivation sounds like the best holiday ever. As long as there is builders tea - things be fine...
I don[t get hulu either, been watching old British programs on Prime lately, safe and slow and do not require a lot of sorting.
I have one friend so called addicted to Pot- but really it is not an addiction is it. Dependence maybe.
A good hypnotist could get the job done but finding a
Good one may be difficult.
Re Hab also sounds like a pretty great holiday to me, just for the adventure of it.

BootsandBraids, I remember visiting a monastery several years ago. Didn't seem too bad.

Betty, yep, one can only meditate so much!

Linda Sue, I think maybe my friend just needs to cut back, but she'd like to be rid of the dependence, so that's a good thing. I'll need to check in with her to see if she's gotten a hypnotist. She's been coughing less, so...
Rehab could be an adventure. Think of the people you'd meet :). Everyone's got a story.

I watch and love this show and can't decide if Nicole is good or evil. I'd go away from the world for 10 days but I don't wish to be drugged like that. Pot, sure. But not all the magic mushrooms etc. I do not like the feeling of being out of control. But I do like this show! I read an article that the woman (jessica) wears wires to pull her face back and fake teeth, fake nails, a fake butt and tan. When she takes it all off her costars did not recognize her. I thought that was funny.

I understand your friend and there should be no shame in this. It's legal. How is it different from a woman I knew in PA who drank every day. No one would have to say she is a good mom, works out, good family etc. They would just say she has an issue with liquor. I hope she figures it out. I know there are small mg of pills that do the same as the smoking because I have a friend who uses those to not have to smoke. It's a shame she can't take those types of things.

Peg, she says, "it's in my head", and is trying to calm herself without the pot. I'll have to ask her if she's tried the pills.

And yes about Nicole Kidman/ Masha! Good or evil? Either way, she's amazing in the role. Funny about the Jessica actress, but it's true. Though pretty, she looks so unnatural, which really fits her character. Two more episodes, where's it gonna end up?

I'm watching the show and enjoying it. After the latest episode, I have an inkling about where it's going. Similar to Devs maybe, which was an interesting show.