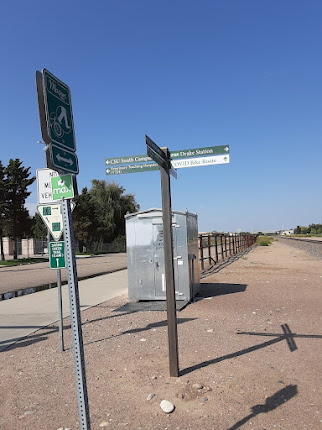 Summer is winding down.  We're getting hints of fall, then we get hit with another day in the 90s.  But at least we don't get hurricanes in these parts.

One day last summer, I noticed a new sign on one of the bike paths, showing a "COVID Bike Route ↑", and I wondered, "What the heck's a COVID bike route?"

I learned that it's a bike route that is particularly wide so we don't breathe on each other too much while passing.  I'm wondering if someday things like these signs, chains of separation on buses, etc. will end up in the Smithsonian or in some COVID museum.
...or will they just become the usual?
A couple of weeks ago at this same intersection, I pulled up behind a couple of middle-agers on bicycles - man and woman.  I thought I recognized the man right away as the guy we bought our house from.  The woman was probably his wife.
They're a nice enough couple.  I've mentioned that the house we bought was a rental when we moved in, and we ended  up buying it from our landlords.  So we'd known them in that capacity and had a pretty casual negotiation in buying the house.
Most of our tenant dealings had been with the wife even though her husband was the sole owner of the house.  I found her very easy to get along with.
The husband is also a nice guy, but there's just... something... about him.  Hard to put my finger on it.  He's a bit cartoonish, for lack of a better term.  Physically big and talks a lot without saying much.  But in a very friendly way.
So I approached them from behind as they were stopped at the intersection, waiting for the signal to go.  I kept my distance as I slowed in order to politely social distance on the COVID route avoid having to chat with them.
Yes, admittedly, I hoped they wouldn't recognize me lest I get hooked in to a long drawn out chit chat of small talk.  Honestly, I would think they preferred to avoid that too.  It was a Friday afternoon.  I'm guessing they took the day or afternoon off of work to enjoy a bike ride together.  They didn't need a rental-tenant-turned-property-buyer to interrupt their "date".
Plus, the dude was without a shirt, which I found a bit off putting.  I mean, the guy's a big man in his late 50s/ early 60s.  There's certainly no law against it, but shirts are our friends.  Add that to his inclination toward effusive talking, and I decided I'd prefer to avoid being recognized.
Once we got the signal to proceed, I dingled my bell and made a wide pass of the couple like any old stranger on the bike path - hoping the helmet and dark glasses make us all look alike anyways.
Glad it was the COVID route.
Posted by Abby at 9:56 AM

WHEW, that was close! Avoiding small talk is my goal!

Linda Sue, so how are you? Got any weekend plans? How about this weather, eh? *cringe*

I honestly laughed out loud when I read, "Shirts are our friends." So very true.