caught between the moon and New York city 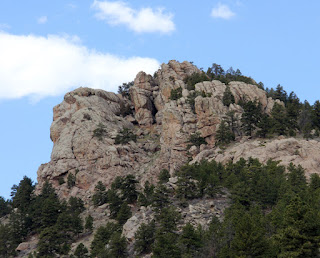 My first knowledge of Arthur's Rock was sad.  A local news story told of a despondent man who laid in wait and stabbed his ex-girlfriend multiple times before jumping to his death off of Arthur's Rock.  Heartbreaking, yeah?  The woman - an elementary school teacher - had a long recovery, but thankfully survived.

The story left many questions, one of which for me was, "what/where is Arthur's rock?" as many locals  seemed to know the place quite well.

I learned it was a prominent feature in nearby Lory State Park and very popular hike.  Morbid story aside, I wanted to do the hike.

When I started my new job in June, I knew the schedule would allow some time to get out to some local hikes I've yet to explore, Arthur's Rock being tops on  my list.  But I'd kinda forgotten about it until one of my previous coworkers from the Old Folks Home hit me up for some hiking and suggestions.

We went this morning, and it was a beaut!  Another coworker buddy joined us for some good time nature fun.

It was a rather hazy overcast morning, and we were loving it after many days of full-on sun and high temperatures.  The haze hindered the views a bit, but they were still pretty glorious.  The total hike - out and back - is under 4 miles, so not too taxing or time consuming.  I learned why it is so popular!
It was nice catching up with these two also.  Continuing on the morbid theme, I asked them which residents had passed away since I'd left.  No big surprises, but a couple of small ones.  I miss my coworkers, but I don't miss watching people decline and die.  And of course, we're still mourning Malcolm.
But not to end on that note, it was a nice morning well spent.  I later learned that Arthur of Arthur's Rock is Arthur Howard, the man who sold the land to the state of Colorado.
We'd speculated it was that aardvark cartoon kid, but were wrong... not surprisingly.
Thanks, Arthur
----------------------------------------------------------------------
Linking up with Mama Kat this week for the prompt:
1. Write about something you want(ed) to do before summer ends
Posted by Abby at 6:52 PM

Such a sad story about Arthur's Rock! I'm glad the lady made a full, but slow, recovery. Looked like a beautiful hike; glad you were able to do it with some friends of yours from your previous job. It would be sad to work in a place where death is a commonplace occurrence. I didn't get it, but I interviewed for a job a few years back for a transcriptionist for the medical examiner. I thought it would be fascinating to transcribe the autopsy reports. At my previous temp job at unemployment, I ran into a fellow temp who had worked clerical in the medical examiner's office, filing death certificates, etc. She said after a bit (she lasted 3 years there) she had enough with dealing with death so she looked for and found another job.

On another note, did you hear about the Boston lady who died while hiking here in the Phoenix area? She got overheated during the hike and decided to go back to the car to wait while the rest of the group continued on their hike. I guess she got disoriented and lost and was found deceased close to a house (speculation is maybe she was looking for help). The fire chief gave good advice. He said to start and finish the hike with the same group of people even if a hike has to be cut short.

Betty, I can understand your interest in the medical examiner job, but yeah, it could get to you after a while. Watching the elderly residents decline was tough, and I decided I didn't want to stay in geriatrics for long. Often, their passing was a relief.

I didn't hear about the overheated hiker. Heat and dehydration are definitely risks. Sad way to end what should have been a fun adventure among friends.

What a horrific story. I'm glad she lived! I bet she no longer hikes up there. But it is a gorgeous view. Cool that you could spend time with former co-workers but like you I am not sure I could handle the dying at your old job.

Peggy, it's quite a story - the woman wasn't able to move, and she called to Siri on her phone to contact 9-1-1. Technology for the save!

I’ve got to stop the reasons/excuses for not hiking the popular trails in my area. I envy you all. Gotta find some likeminded companions.

Wow, what a horrific story. I'm so glad the lady lived and that Arthur did NOT. I'm sure she never wants to see that damn rock again...but it is a lovely view!