look out and look up

Last week, I mentioned I'd gone out for a run on Saturday morning and passed by a lone woman sleeping in her idling minivan.  I speculated that she just needed some time alone, away from the house and family.  When I returned near the end of my run, she was gone.

She was there again yesterday morning.  Same lone woman. Same minivan.  Engine running.  She wasn't sleeping this time but rather looking at her phone.  Okay, fine.  Maybe she had such a recharging session last week, she's decided to make it a regular thing.  I get it.

And once again, upon my return, she was gone.  HOWEVER, in that same spot sat a guy in a Jeep Cherokee.  He was also by himself.  The engine was running.  What the...?

Now, this wouldn't be so weird if not for the location.  I mean, people pull up on streets for whatever reasons.  Except, this isn't a place where people would normally park.  Here's a view from google maps: 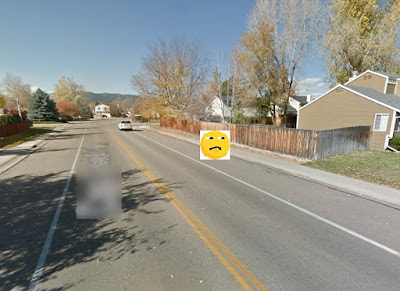 It's the road off the main road that enters our neighborhood.  I've placed a "suspicious" emoji to identify the spot of the idling-vehicles-with-one-person-inside.  It's not in front of any particular house.  I'll also mention that if someone was just lost and turned in to figure things out, it's a coupla blocks in from the main road.  Seems like a lost person would just pull off the main road.

Clearly, something's going down in the hood!  Or... clearly, I'm going batsh*t crazy amid the lockdown!

In other paranoia news, I think the military is tailing us.

We lived in Colorado Springs for 16 years before moving here in December. Colorado Springs is home to the U.S. Air Force Academy, and our house was not too far from there.  Every year at USAFA graduation, the Air Force Thunderbirds put on their dazzling show.  They also have a few practice sessions beforehand, so it's pretty much a week of Thunderbirds flying around, which was always cool.

The Academy held graduation yesterday, quite a bit earlier than typical.  It was a subdued event with graduating cadets sitting eight feet apart, no spectators, and no Thunderbird performance. 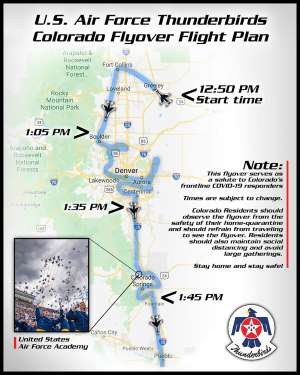 In light of the covid-19 situation, the Thunderbirds instead did a flyover of Colorado, starting at the North end, where we are, and continuing over USAFA graduation and beyond.

Magnum and I were out walking around when we noticed several groups of people out, socially distanced, seemingly waiting for something.  That's when I remembered about the flyover.

We don't get Thunderbird action in Fort Collins.  In fact, it's rare to hear a jet of any kind, so this was something.


And then... there they were.  They made their pass while people snapped pics and clapped.  A few honked car horns.

It really wasn't anything like the raucous display of power, precision, strength, and technology of their typical graduation performance.  It was instead an eloquent show of support and solidarity.  Nice.

Several photos from locals showed up online a short while layer.  Some indicated expensive camera equipment and honed photography skills.  But of the amateur photos I saw, I like this one the best.

Is there a cell tower nearby? Or maybe's running a wi-fi network nearby and hasn't locked it down.

John,hmmmm... interesting thought. I don't think cell service is an issue in the vicinity, but the free wi-fi option might be a thing. I'll go check it out!

Loved this: It was instead an eloquent show of support and solidarity. Nice.

Sandie, it was really only for a moment, then they were gone. It was a warm moment, though

But she was sleeping there the first time? And then another car was parked there? So odd. Fun to have something interesting to think about during this time. :)

Glad to hear you’re staying healthy and safe (minus the allergy issues), and able to enjoy some Starbucks treats! Love how people and companies are pulling together to show appreciation. Certainly some warm fuzzies around if you look for them. :)

That whole car thing would become a "thing" for me. I'd be looking all the time at the area to see if "they" are still sitting there scoping out whomever or whatever. I know me well enough to know I'd go back to see if they are there the next day. I'd be taking license numbers and playing a whole Dateline episode in my head. I watch way too many Dateline, 20/20 episodes I fear.

When I would take Margaret to her various home-care clients I would have to sit outside people's houses for an hour or a little more, but with the second car, I don't know. Maybe it's a private investigator company watching your movements. You can tell us. Running top secret documents somewhere?

SR300, yep, sleeping - or at least reclinging - that first sighting. Who are these people??

Peggy, okay, I was wondering if I was the only one who would make it a thing. I'd say it's officially a thing!

Herb, thing that makes it fishy is that it's not in front of anyone's house. It's no man's land. I think they're on to me! Wish I knew what I was doing!