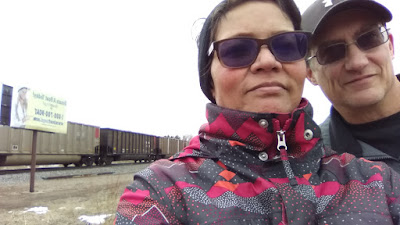 One thing we've had to get used to in Fort Collins are the trains that travel, seemingly quite frequently, north-and-south through the center of the town.  We got caught by another one today while out walking.  Our wait wasn't TOO long.  Maybe 10 to 15 minutes.  But 10 to 15 minutes can feel like a long time when standing around waiting for a train to go by.  I was so bored, I took a selfie.

But it was good weather to be out in.  I get even more bored if I'm stuck with a train while I'm in a car, making up a long line of train-waiting cars.  Since I rarely drive, that's  not much of an issue.

We were coming back from coffee and a little shopping excursion.  Recently, I was singing the praises of my big snuggly 20+ year-old winter parka.  I'd bought it from Cabela's when I was preggars with Meego, and it's lasted all this time and kept me sheltered from many an element.

No sooner had I finished gushing about the parka attributes that the zipper pull broke off.  Well, no biggie, I rigged a makeshift zipper pull in pure MacGyver fashion.  But it's like the universe really wanted me to shed that parka, because next, the whole zipper started giving up the ghost.  You know that thing where you zip up, but then the zipper unzips from the bottom? So annoying.

Freshly caffeinated, we hit Sierra Trading Post, where I found parka love at a bargain price.

Gosh, wearing it makes me feel like a Scandinavian ski bunny.

We've had a very snowy February, and I've appreciated the outerwear.  I'm eager to put the new purchase through its paces, but now we'll probably have an early spring.  Oh well, either way, it's a win.

I don't think it will help with avoiding trains, though.


Gotten anything new lately?  What'd you get??

You have a lot of trains out there - I had no idea trains were still alive and well.
15 minutes wait would get me a bit stressed.
You needed a new parka - and I like it!
sandie

Nothing better than a new parka in winter! We have had 0.6 inches of snow so far this year. Jealous? Weird winter here. I grew up where there were lots of trains. you would be surprised, or maybe not, how many impatient people try to out run on feet or car a train. Guess who wins Abby? :-)

I don't think I've ever been on anyones blog where they've described themselves as a "Scandinavian ski bunny". Not that I actually know what that is. Is it like a Playboy bunny but wearing more clothes?

Sandie, yes. Freight trains. Several a day travel through busy intersections in town, so it's something to get used to.

Peg, I think it's snowed every other day this February. I'm starting to think that maybe we should've moved to Arizona after all! We had frequent trains in the town where I grew up, but things moved pretty slow there. Trains were a source of excitement.

Joey, I think a snow bunny is someone who hangs out at ski resorts mainly to be seen in fashionable ski wear. She might ski now and then. The Playboy bunny connotation probably fits in a lot of cases :)

Congrats on participating in the Inktober52 challenge! I have to smile at your many drawings of hamburgers :) May you and your Nordic parka have many happy years together!

10-15 minute wait for a train? That woulda killed me - especially if I was in a car.
I love that you walk for coffee and a little bit of shopping though. Now that we live downtown, we’re able to walk to more places, and I really do love it. Need to get me a snow bunny parka though. We’re not getting much snow, but it’s COLD.

Linda, Thanks! And I recall drawing several not very appetizing hamburgers :)

SR300, the trains are a very common topic of frustration around here. It somehow seemed less frustrating while out on a walk than in a car. And regular outings give you a good excuse to get a new snow bunny parka!