I was at the dentist a few weeks ago.  Our (now ex) dentist is quite chatty.  He was asking about what each of our kids is doing these days, knowing that we are a family of nerds/engineers with Meego being the latest to pursue a nerd degree.

He commented, "engineering is one of those majors where you can get a good job with just a bachelor's degree".  Then he went on to say,

With that, the assistant perked up.

"You have a bachelor's in ZOOLOGY??"

Dentist immediately responded, "okay, what do you think that is?"  He had obviously had similar reactions before.

"No", he went on to humorously explain for what seemed the umpteenth time, "zoology is biology without the plants".

It's a very common pre-med/dentistry major, but people assume he really wanted to be a zookeeper.

I'm thinking of it now because I felt like a bit of a zookeeper this past week, helping our animals adjust to their new surroundings.

We're having a new dog run delivered today - any minute in fact.  That will be nice for the dogs as we don't like to just let them out to run willy nilly around the backyard without one of us out there with them.  With that and the cold temperatures, they've been indoors more than they're used to. 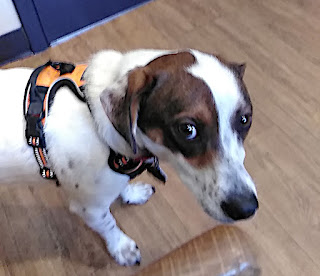 Penny was due for a checkup and shots, so I found us a new vet and took her there on Wednesday.  She's such a drama queen.

When we got back, Merlin seemed sad that we'd had some sort of adventure without him.  I got out his harness and put it on him, and that seemed to make him feel better even though we didn't go anywhere.  He's so easy to please.

The cat, on the other hand, is chomping to go outside.  We weren't planning on letting him out for a good while since we moved, but in the meantime, we've learned that cats aren't allowed to EVER go outside within these city limits.  Well, unless he's contained within the yard (fat chance).  I think one of the main reasons he goes out is to get out and explore beyond his own yard.  Cat leash?  HA! 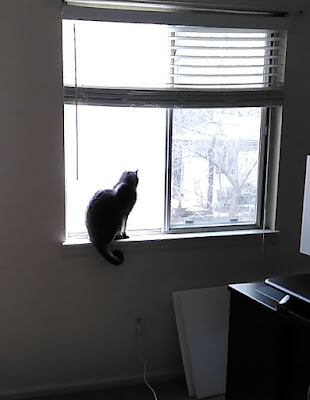 But he seems to be dealing with it, mixing it up with the dogs when he feels like a good scrap.

In the middle of all this change, Christmas is next week?!?!

I haven't done a whole lot in that regard. I don't think we'll get a tree since we're in a rental, but I feel I should throw up some lights, something.  And gifts?  Is it too late to shop?  How about the old candle standby?

Oh Abby that is so funny about Penny and the harness so she feels better. I love that. Dogs don't like a lot of change anymore than some adult humans. It makes me chuckle.
Cats aren't allowed to roam in our neighborhood either but they do. I am deathly afraid so I have had to train Izzy to "shoo" them for me. It's pretty funny. She comes back and acts so tough and proud that they ran away and she protected me. But one day she ran after the cat and it just stood there. It was like a cartoon - she went sliding right past the darn cat as it watched her. She kept looking at the cat and walked back to us like she failed. I, of course, laughed like crazy and told her she was a good girl anyway it was just a bad cat. HA HA HA

Most animals do get stressed when moving. At least our dogs have each other, but I think the cat is missing his Fight Club buddies.
I think the no-roaming-animals law is pretty well enforced out here. The only other cat I've seen was watching me from inside a house.
I did not know you were "deathly afraid" of cats! Maybe you told the story before I knew ya, you have so many good stories!

Yes I think they are just stressed a bit with the move. SHE Looked so cute, although a little bit suspicious! lol

Sandie, Penny and I walked to the vet since it's less than a mile away. At first, she was all, "Weeeee, a walk!", then she realized where we were...

I'm decorated for Christmas since I never bothered to put away last year's minimalist 6" tree on the mantle. I hope all your animals find peace with their new environment and you have a wonderful holiday!

Linda, nice decorating plan! Happy Holidays to you, too.

Larz, I think catios are so cool! Our cat would probably be insulted, though.