at least the view was nice 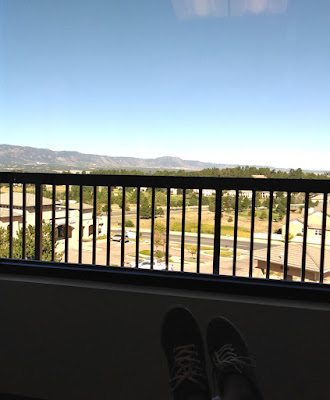 I sat waiting for the inevitable confrontation.  This wouldn't be pleasant, but things needed to be said and acknowledged.

Things were so hopeful in the beginning, but alas, it wasn't to be.  Red flags revealed themselves early on, but I let them slide, thinking maybe we could salvage the relationship.  Maybe it was just typical adjustment period stuff.  Maybe it could work out for the long haul.

But who was I kidding?  Deep down, I knew from the start.  Something just wasn't right.  Life was good, I'd even say it was better than before. But... but...

He entered the room, and already I knew that he knew.  He looked so sad, so defeated.  He was sincerely apologetic.  He chalked it up as a loss, a loss that he mourned.

I felt bad for him.  Honestly, I felt worse for him than I felt for myself.

I'm now scheduled to have that bastard of a tooth extracted from my head next week.  Good riddance, I won't miss it.

I do feel bad for that endodontist, however.

but you're out the money. :-)
Sorry for the pain and suffering though.
Do they replace it with a fake tooth? That sure sounds like fun Abby I do not envy you.

Funny thing about tooth stories -- it's THE ONE SUBJECT that triggers more "I can top that" responses than any other. Not that I can top yours....

Peggy, I'm trying to not think about the money :). Insurance covered the bulk of it, at least. I think the plan is to replace it with an implant - dental, not boob...

Anonymous, true - lots of tooth stories out there. Similar to labor and delivery stories. Some of the best I've heard came from dads.

Whew! I’m all caught up. I learned something new - don’t exercise before a blood test. And I giggled - Go Rams! And I felt sorrow for Sandy, and then again after reading about your tooth! You sure got lots going on.
Glad the weather’s been holding out for you so you can continue mountain biking. I’ve been riding my bike more and more around here now that I’ve found a great paved trail I can access not to far from my home. Love that the weather has continued to be nice.

Oh my gosh that is tough and a lot of money. Do you need an implant now? I hope you feel okay.

SR300, I'm glad you're able to bicycle - away from motor traffic to boot! Just don't do it before a blood test! Speaking of exercise, a man died on the Incline this week - suspected heart attack 😨

Chatty, thanks, I feel fine. The tooth doesn't really hurt since the procedure, it just always felt a little off compared to my healthy teeth. I was all, "I can feel my heartbeat in my tooth, and I don't think that's supposed to be a thing".

Oh yuck. Not a happy ending to the tooth story. You have my sympathies.

Saw that nice stitch job over on your previous post from your link. Nothing like a good surgery story to get my attention. Good luck with your upcoming procedures!!!