Wolfgang's workplace  has held an annual chili cook-off for the past several years, and Friday was the day for 2018.  The thought of a  bunch of engineers cooking chili doesn't naturally inspire high expectations, but apparently the results are quite tasty.  Winner gets a big sombrero.

And darn if Wolfgang didn't almost win that sombrero!

He got first prize in the "unique" category and second place overall.  Got a trophy and medal, even.  Lookie! 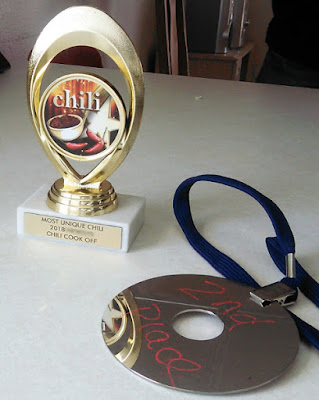 As can be seen, they really pulled out all the stops on that 2nd place medal/magnetic disk clipped to a badge holder.  It's even "inscribed" on the back 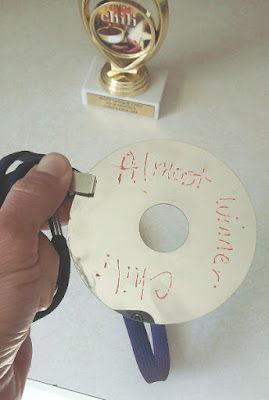 He dubbed  his dish "Aloha Sweet Chili".  *Spoiler Alert*  The secret ingredient is pineapple.  Who knew??

He'd actually made it for us a couple of weeks prior to the cook-off, and we got to be the test kitchen.  The only thing he changed for the cook-off was, he let it simmer longer - thus the 10 pm cookfest.

I agree, it's very tasty and worthy of the prizes.

but we ate it.

Congrats to Wolfgang! And what fun prizes! Who woulda thought pineapple?

It was quite tasty. Who puts pineapple in chili??

I can totally see pineapple working in chili. It's like the sweet, tangy type flavor.

Congrats on his win! Those are pretty awesome prizes! Is he sporting them on his desk?

Sweet and tangy works good for chili. I think he does have his prizes prominently displayed :)