I used to do "silver lining" posts nearly every Sunday, but somewhere along the way, I got out of the habit.  I think I'm due.

We had grey skies and rain all last week, which is quite rare for this neck of the woods.  We don't typically get socked into any one particular weather pattern, but there it was - the week of grey.  It was nice to have all that moisture, but the lack of sun was starting to get to me by the end of the week.

However, one of the teachers at work noted that the students all seemed better behaved than usual?  Maybe so.  The greys kept the stir-crazies away?  Crappy outside, may as well buckle down?

The sun did return, and I snapped this photo while out on a joyride with Alice this morning.  First sign of appreciable snow on the Peak - not much.  Like a pubescent boy getting his first chin hairs. 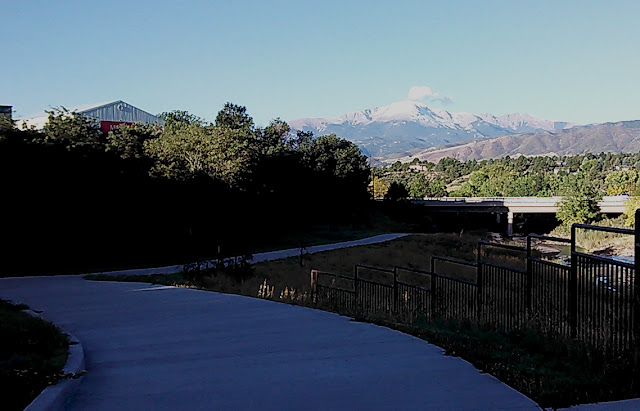 In other silver liningness, I usually have the sun in my eyes on my way into work each morning.  With the clouds, that wasn't a problem.  One coworker asked how I stay dry on such rides, so I'll give a shout out to my rain gear.   Love me some rubber pants on a rainy day!

Now, it's on to the next thing for him - a deserved and respected university position at his Alma Mater - MY Alma Mater too!  Go Buffaloes!  The university should name a building after Hagrid.  Then I can pretend it's named after me.

Funny how the grey weather days settle the students down somewhat, I never really thought about it but it makes sense, and not having the sun in your face for your morning commute is a plus.

Congratulations to your brother on his retirement and university position, you never know they could name a building after you, or even him before long.

Thanks, Jimmy. It feels like we should at least get a tree or a shrub in our name for all the tuition we've paid to that school.

Grey skies are a normal part of our winter, and I am not looking forward to it. Glad yours only lasted a week.
(Though I'm sure it felt like a crazy long week.).
And congrats to Hagrid! Always exciting to start a new chapter. Nice he's earning some of the money back from the place this all started. :)

I know I shouldn't complain, we're pretty spoiled here with our weather. It makes for a wimpy tolerance.