to the dark side

You may have heard that there was a solar eclipse event that graced portions of the United States yesterday.  Here in our neighborhood, we got about 90% of totality.

But why settle for 90% when you can drive a few hundred miles for the full 100??

So that's what we did. Hightailed it north to Wyoming.

It actually took a "bit" more planning.  Magnum found and reserved us a campsite about a year ago.  Then we had to get the official glasses.  Then we all had to have the day off.

Recall that I just started a new job.  I felt uneasy about asking for two days off right off the bat, but I went ahead and put it in the system to be off without pay and arranged for a substitute, THEN I asked.  The bosses were way cool.  One noted, "You reserved your campsite before we even posted this opening...", which was true. 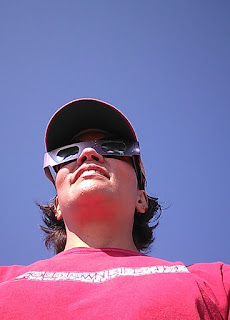 So, free from guilt, the guys and I headed up to Wyoming.  What an amazing sight!  The day was perfect for it, full sun with just a few wispy clouds in the distance. 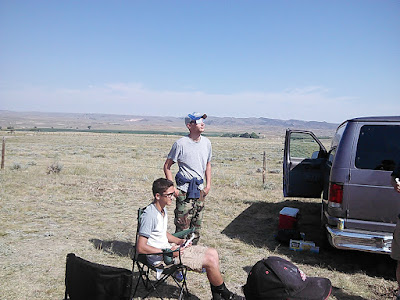 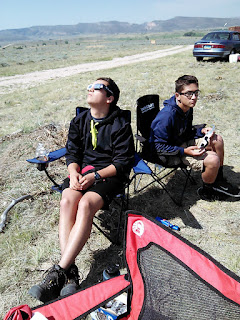 As can be imagined, there was a lot of gazing at the sun.  Those thin cardboard glasses we got worked beautifully.  Pack o' ten for $12.95.  Last week, they were  $150 if you were lucky enough to find them in stock. 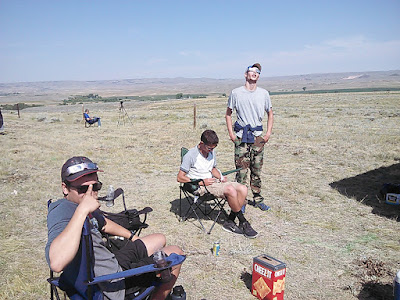 The CheezIt box was a highly technical device used to see the eclipse without glasses and without going blind. It was one of three projects Meego was required to come up with and build and use for one of his classes.

It worked perfectly, of course, because everyone knows the moon's made of cheese.

It was totally worth the trip.  We watched as the moon slowly slowly covered the sun and the temperature slowly slowly dropped and the ambient light slowly slowly became dimmer and dimmer.  Then with a final surge, it was "suddenly" dark.

Stars came out, we could take off our glasses and see the ring.  It was dark and cold and awesome. 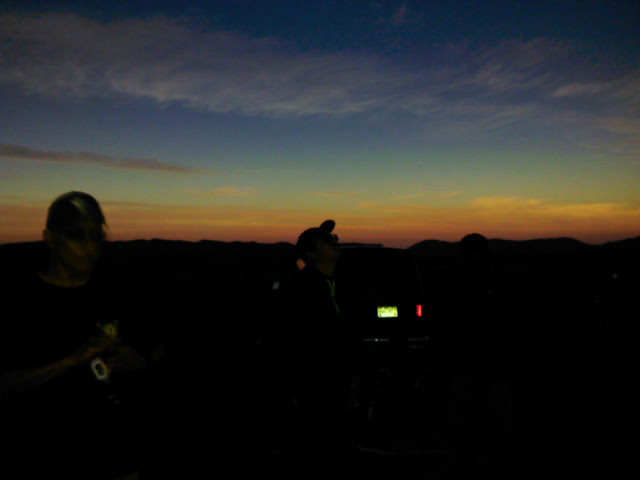 The camp we were at was a great location and had many other eclipsians, some with very sophisticated viewing equipment.  (Ours was the only CheezIt box I saw...).  The people next to us had some sort of live radio feed with countdowns to various points of the eclipse.  As we all stood in awe of the sight, after a couple of minutes, the robotic voice chimed in,

"In ten seconds, put your glasses back on".

Darn if that "diamond ring" didn't appear in exactly 10 seconds 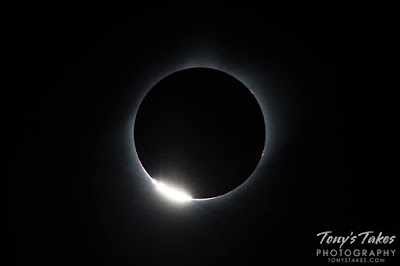 And then it was passed.  People were still clapping.  Some were pouring champagne.  Good times.

All in all, a highly memorable experience.  I'd "seen" partial eclipses before, but those just don't do justice to a total eclipse.  Well worth the drive and effort, even the tedious long drive back in all that post eclipse traffic.

And we did take a moment for that deer we killed...

but that's another story.

The diamond ring was so darn amazing. I think that was one of my favorite parts of viewing it. :)

So cool! We only had 60% coverage so no darkness. I'm considering going to vermont for the one in 2024 to experience the total black out. Is it too early to plan ahead?

Definitely! The whole thing was even better than I expected.

Yeah, even at 90%, the dark wasn't very noticeable, but I was told that the temperature noticeably dropped. Plan now!

Very Nice, I am happy you got to do this, I have never seen a total eclipse myself, we were only at 65% here but it was still pretty cool to see.

It was pretty amazing to look through those glasses and see just a sliver of sun, but have it still be pretty bright out. The drive home was a pain, but worth it.

We were at 93% here in Joplin, but since I didn't have glasses, I didn't notice much of anything. The temps noticeably dropped however, and the skies dimmed a little. Amp, who absolutely loves this kind of stuff, convinced my hubby to drive to Carbondale, IL with him to view the total eclipse. The weather channel happened to be filming Carbondale's viewing of it, so it was almost like I was with them. So exciting.
I love that Magnum set this up a year ago, and that you were all able to go. Sorry to hear about the deer though. Wonder if he was thrown off by the eclipse? :(

Meego's 8th grade science teacher was talking it up,which got us first considering, and I remember thinking, "Oh that's a long way off". Pfft, now it's done and done!
You were very close. I'm told that temps around here dropped almost 10 degrees. I'm glad that Amp and the hubby got to see it and sure it was very memorable for them too!

Champagne on a campsite, that has to be a first. Here in the UK we saw nothing. Sigh.

Seeing champagne in the boonies was a first for me too.