a mountain, a sweatlodge, and a sacrificial deer

First, we had to wait for Wolfgang to run up a mountain...

Last Saturday was the annual running of the Pikes Peak Ascent.  Thirteen miles up the mountain.  (The marathon - up and then back down - was run on Sunday).


This was Wolfgang's third time doing the race, and he managed a new PR of a very respectable 3 hours 15 minutes, being the first of his buddies to finish and taking 6th in his age group

Eventually, his two friends crossed the finish line, and they all got off the mountain.  In the meantime, we'd been packing up the van for our trip north to the eclipse.  We made it out late Saturday afternoon, arriving in Chugwater rest area late that night.  Good ol' Chugwater.

It wasn't much further to Manters Camp, so we had most all of Sunday to play around and explore after we set up the large tent and got our campsite humming.  All of us except for Chaco, who somehow managed to get a decent sleep at Chugwater, needed a siesta.

We napped in the tent, not realizing that we hadn't removed the outer coverings of our windows, so the breeze did NOTHING.  We awoke in pools of our own sweat.  I just decided to refer to it as Sweatlodge time rather than naptime.  Supposed to be healthy, right?

Thusly refreshed, we trekked out to the surrounding boonies and found a real pretty getaway spot.  As it happened, Wolfgang had a gimpy foot that he'd injured while training for the Ascent, and the foot was really whining after running the thing.

As such, we didn't traipse around as much as we might have so as to not "leave the cripple behind".  Still, Chaco got in a bit of a climbing fix 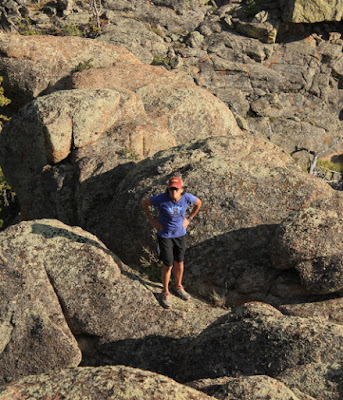 That tippy top scared me, but I got close.


We were in an area of national forest and  broke out our camp cookware and ended up having our dinner there and just hanging out.

By the time we'd cleaned up and packed up, it was nightfall...  *foreboding music goes here*


Chaco was driving the country road back to our campsite, about 10 miles away.  Suddenly, a deer went scampering across the road in front of us.  Immediately, I thought,

"Hmmm, usually where there's one, at least one more is behind it"

We got him.  The sound was horrible.  I was pretty sure he was dead since we hit him just as he was emerging onto the road - in the head.  Chaco pulled right over to inspect the van and to make sure the deer wasn't suffering.

As expected, it looked like the deer had died instantly - hardly any blood.  His body lay "peacefully" parallel to and alongside the road, facing behind us.  I'm pretty sure we hit him in the head, and he spun around.

He took our passenger side headlight with him, but didn't damage the engine and only left a couple of small dents in the side door.

We'll have to have the panel surrounding the headlight fixed before we can repair the light, but all in all, the damage was pretty minimal.

After we returned home, I took the van to the shop for an oil change and a once over.  As I explained the deer incident to the service guy, a young man in the waiting area chimed in.

I mean, what else do you say?

That's always so sad to me. I've witnessed a deer get hit, I've hit a deer, and I've seen many a hit deer alongside the road. Always sad. :(
But glad to hear you all are alright, and there was very little damage. Sometimes it doesn't end so well.
Congrats to Wolfgang on his 3rd trek up the mountain! A PR with a gimpy foot is quite impressive!

I wonder how well Wolfgang would have done without the injury? He did really good to finish 6th with his foot hurt.

I'd seen a few car vs. deer and the aftermath, but this was the first time I was in the car. He was a beautiful animal in his prime from the looks of him :(
Wolfgang was happy with his race, even if he sacrificed a foot.

I asked Wolfgang how much he thought the gimp foot hampered his time, but he said he didn't think he could've gone much faster, and he was happy with his race.
And yes, I'm certainly glad it wasn't a melk either. Those things are huge!

Well done to Wolfgang, gimpy foot and all.

Poor deer, poor car. So did you have to move the deer off the road?

It was very best-case-scenario as far as deer collisions go. He landed completely away from the road, but nearby, so we didn't have to search through the brush or move him.

Did you have venison for supper? You're lucky about the van. I've seen cars that were demolished after impact. My eclipse was a total non-event. People around here felt uncertain whether or not they'd experienced it, and I had more of a shadow when a hawk flew over. Congrats to Wolfgang!