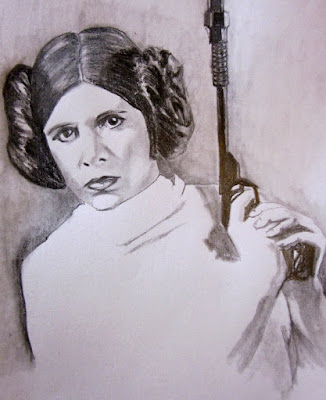 I've been thinking about my hair.

It's neither long nor particularly short.  Sometimes I wish it was longer so I could wear a decent ponytail.  Other times I wonder if I would look more "professional" if it was shorter.

In the meantime, it stays somewhere in the middle.  It's "mom" hair, I suppose.  It's definitely not iconic.

This week's prompt at Illustration Friday is "swirl", and as I tried to come up with something, my thought path led me to Princess Leia and her iconic do with the lovely earmuff hair swirls.

Carrie Fisher's recent death has brought Princess Leia  back into the limelight.  I remember watching that first Star Wars movie way back when it was the latest rage.  I was about 12 years old, and I went to see it with my family at the theater.

Years later, I saw a short documentary about it, and how the actors and creators never expected Star Wars would become as huge as it did.  And who doesn't know at least a little about the character, Princess Leia?

The last time we went to Denver Comic Con, there were plenty of Star Wars Cosplayers in attendance.  My favorite was a father-son duo, dressed as Princess Leia and Chewbacca.   The little boy was Chewbacca, and Dad was the lovely Princess Leia - complete with full beard.

But there was no mistaking that hair.  Maybe I should do the Leia do for my own hair, to change things up.

Not in a  million years.

I wonder the same things about my own hair. I like that I can pull it up in a ponytail, but when it's not in a ponytail I wear it pulled back which makes me look like a little girl. Not managerial like. But until I know what to do with it, I just keep it the same.
Your drawing of Princess Leia is terrific! I thought she was so beautiful. But I don't want her hair...

The hair - what to do? Major life decisions...
I thought Princess Leia was cool. But who came up with that hair?

Every time I let my hair grow, I never like it as much. So I generally keep it short.

Great picture... I remember going to see the 1st one at a drive-in theaters, I must've been maybe 5 or 6, and there was some guy dressed as Darth Vader. I remember thinking that he'd better hurry up and get behind the screen before the movie started without him (I thought, somehow, the movie actors put on the movie as they acted behind the screen.)

I love how well you captured Leia's determined and confident expression. I saw the first Star Wars movie at about that age, too, and I (and everyone I knew) thought it was the best movie ever. Maybe you could pull off her hairstyle?

Every time I cut my hair short, I want it long. When it's long, I want it short. sigh.
Ah, the drive-in. Don't see many of those anymore. Darth would had to have been pretty big!

I was entranced the whole time watching the movie, even with my dad pointing out all of the technical mistakes!

I love this! Do you sell any of your drawings? You should! I'd buy this.

Aw thanks, Ginny. I don't necessarily draw them to sell. I make some into cards for people. It's just a pastime. I post them on deviantart, where I'm very much a Plain Jane compared to most others!

I'm embarrassed to say I've never seen Star Wars and no nothing about Princess Leia. I do know Carrie Fisher though, and loved seeing her being interviewed by Ellen.

Wow! You're a terrific artist! You should sell your work!!