It was a hot and sticky Thursday...

Okay, honestly, I don't know what day of the week it was.  I do remember that it was rather hot and sticky out.

Anyway, I was 19 or 20 years old.  I still lived with my parents in my little hometown.  I did two years of college there before transferring to a larger university.  As I recall, I was  having a "bad day" that particular day, but I don't remember the reason.

At that time, I drove a little pickup truck.  I had taken my pickup down to the shop in the morning for an oil change, and I planned to pick it up later that afternoon, after my classes.  So I dropped off the truck, and walked to the college with the plan to walk back to the shop later in the day and drive home.  I provide this detailed map for reference: 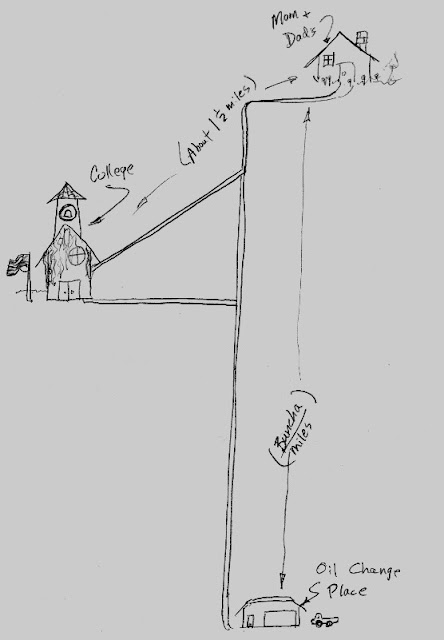 Upon my arrival at the shop, the shop manager greeted me, and began rummaging for my paperwork and keys.  He continued to rummage.  He rummaged some more.  More rummaging ensued...

I could see my truck sitting in the lot, presumably ready to go.

After the rummage fest, the manager informed me that, the tech who'd serviced my truck, apparently, probably, most likely, evidently, accidentally left.  With my keys.

Now, this was back in the mid 80's.  WAy way before cell phones - the kind that normal people had anyways.  The manager was very sorry.  He said they'd try to reach the guy, but as the shop would be closing soon, he wasn't sure if they'd have my keys back before the next day. 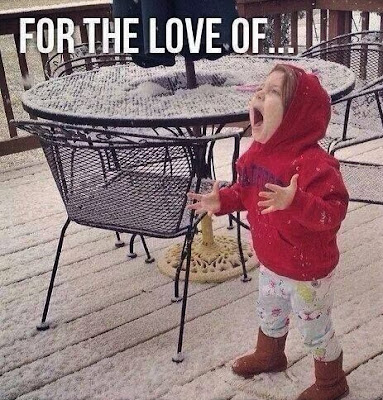 Eventually, I reached home.  But any satisfaction I would have had from that was tempered by the fact that I still didn't have my pickup.  I probably needed to go to work as I tended to do that a lot during that time.  And what about the time I'd lost, trudging back and forth, for nothing?

So I entered the house feeling defeated and pissed off and yucky and sweaty.  Mom wasn't home, but Dad was there.  Poor guy.

Now, Dad was not the kind of guy to isolate or insulate his kids.  We had to work for stuff.  He had expectations for us.  There were times when he'd tell us, in not so many words, to just "suck it up".

And somehow he knew that this was not one of those times.

He didn't tell me to suck it up.  He didn't join me in my tantrum.  He didn't get on the phone and call that shop and give them the what for.  In fact, I don't remember him saying much at all, other than that he would take care of it.

He walked down to that shop and returned shortly with my truck.

Today, I don't remember just how that happened.  Maybe the shop got hold of the guy and got my keys back by the time my dad got there.  Maybe my dad had a spare key that I didn't know about (most likely).  What I mainly remember is that there was very little talking.  Just Action.  Effective Dad Action.

I never even asked what went down at the shop.  This was a small town where everyone knew everyone.  Certainly, everyone knew my dad.  And I know those guys knew I was his kid.

Did he go all stern on them?  Or did they just sympathize with each other?  "Daughters, eh?"


When I moved out of my parents' house, I was quite happy about it.  Ready to move out of my little hometown and be independent and go on to bigger and better things.

And I've (usually) enjoyed my role as being the main "Point of Contact" when our kids have some crisis that needs resolving.

But that doesn't mean I don't miss the days when Dad had my back.

Linking up with Mama Kat again for the prompt:
5. Write about what you miss most about living at home with your parents

Yeah where would we all be now if it wasn't for our Dads? Nice story and lovely photo.

This story was the best. Not the bad day part and the shop sucking so bad that they lost your keys, but the Dad coming to the rescue part and not sure how he did it.

Cheers to all the good dads! May yours and mine rest in peace, Joey.

He just got 'er done. I think I didn't question how he did it because he just typically came through like that.

oh this...so much this...so much this because last week my son ran to me after school after he couldn't take it anymore. He talked and yelled and stomped and I just listened to him.
Then Monday his vice principal changed the entire class partner assignments.
My son didn't know how or what happened...
But let's just say that kid won't be making fun of my kid for his reading again.
Your dad sounds like a wonderful parent who had his daughter's best interest at heart. No ifs ands or buts.
xo

Yeah. I'm still wondering what happened when he got to the shop!

This makes me just love your dad. He was your hero that day (and many others, I'm sure.)

Since I grew up with him, I thought most men were like him. Hahahahahaha!

Your dad sounds like a good guy. Nice story, a nice reminder of life before I myself had to stand on my own two feet as a grown person.

I especially love the time you took to draw us a map. At first I was thinking the map looked like one giant hill and then I realized that's because it was. lol So miserable. Hot, sticky, giant hill, no car...yep I'd be throwing fuck around too.