Since I'm still on a bit of a break, I thought I'd get out my art toys and play some Illustration Friday, where the prompt this week is "Tape". 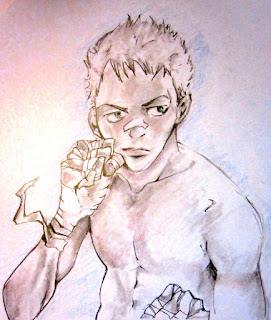 I ventured into the waters of Manga style, which isn't really my thing, but every now and then, ya just gotta live on the edge!

I've seen many a manga drawing from amateurs that are quite good, and I understand manga comic books are pretty popular.  I don't know if I can pull it off so well though,  I'll leave it to the youngsters.

But, I had no other inspiration for "Tape", and now I've got something to show I care.

Thanksgiving went off without a hitch, and we enjoyed the food, some Best Buy hordes, and a bit of board gaming.

As I've mentioned, the trek to Best Buy just started out a few years ago as a destination for get-outta-the-house walk on Thanksgiving and has become sort of a tradition.   We weren't there for door-busting, just showed up after the fact.  As for me, I mainly enjoy the people watching.

It was pretty crowded, but the store set up extra register lines and everyone was just so darn polite.  Lots of, "excuse me", "thanks", "after you", "you go ahead", etc as customers trucked huge carts of TVs and such around.  Really, people were buying multiple TVs - 4 or 5 to a cart.  I didn't even check the prices, but maybe they were deals?

We managed to emerge a while later without spending anything except for Meego, who did get a good deal on a computer monitor.  Wolfgang had some things in his sights, but none were on sale.  That's the way the Thanksgiving door busters bust.

Meego's monitor is a nice step up from his previous one, which isn't saying much.  I oohed and aahed over the resolution and then asked Meego if he wanted to join us in the *smirk* "real outside".

You did great! The only thing that caused me a problem was the partial bandage on his nose. At first, I thought it was two noses. The hands are great and show strength.

I love the coloring and shadows on the illustration--great job! It's nice to hear everyone was polite at Best Buy. Some of the stories about Black Friday were appalling. I was able to drag my family out for a quick walk after dinner thanks to your inspiration :)

I think you've got a flair for manga. I'm glad you had a happy Thanksgiving. My family always took a walk in the park after lunch when we went to our grandparents'. Somehow, I can't see them doing that at Best Buy, but each family has to come up with their own traditions :)

I appreciate your knowledgeable eye!

I don't really enjoy shopping ever, but I'll do Best Buy if it gets everyone out for a walk. Glad you got your brood out and about!
And yes, everyone was so polite - extra wine at dinner?

We used to do the park. Somehow that inspired less enthusiasm than Best Buy with this crew.

I loved Moonrise Kingdom. Obviously that makes me quirky too.

So the stores are open on Thanksgiving?? Wow. Are the open on Christmas Day too?

I like your drawing, Manga has a very unique style doesn't it? My younger daughter was into it for awhile.

A very small number of stores open on Thanksgiving. I guess that's what makes going to one... er... special?

You should draw manga style more often, you're good at it. I always love when you post pictures of your drawings. I wish I had your talent.

It was kinda fun experimenting with manga. Pointy hair :)

Link and Amp are very good at drawing Manga. I'm sure they'd be quite impressed with your drawing!
I envy you being able to take a walk to Best Buy after Thanksgiving Dinner. But not necessarily because it's Best Buy. I'd love to be able to walk to ANY store. Heck, I'd love to be able to DRIVE to any store without having to pack a lunch. (Is it obvious I just got finished with my long commute from work? Please forgive my whining,)

I'm impressed by people who can draw Manga well. I think it adds a level of emotion and artistic expression beyond just realistic drawing.
And thanks for reminding me to be grateful for the ability to walk to Best Buy :D