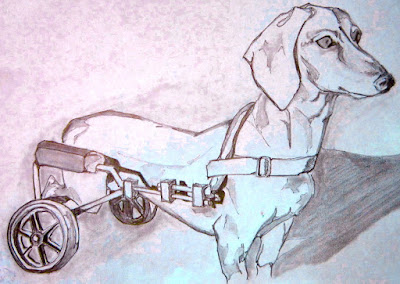 It's been a long time since I played some Illustration Friday.  So long it took me a while to find my art pencils, what with all the tidying going on lately.

But I found them and did this sketch of a Dachshund on wheels for the topic "Wheels".

Wheels is a bit of a theme this week.  That Honda Civic we bought for Meego to learn to drive?  It needs tires and I almost got some today, but the shop was too busy, so I'll try again on a weekday.  The tires it has now are somewhat bald Pirelli's.  What?  On a no-frills '05 Honda Civic?  It makes us wonder the story of this car.  I've told Meego that the replacement tires will certainly NOT be Pirelli's.

In other wheel news, I helped out a somewhat damsel in distress who was stranded on the side of the road with a flat tire on her bicycle.  She had a very nice road bike and was wearing all the fancy gear, so I knew she knew what she was doing, but the tire that was flat would NOT come off in order to repair it.  It was rather cold outside, so I'm thinking that might have had something to do with it, but anyway, eventually we got it taken care of.

She'd been working away at it for about 20 minutes she said, when I'd come by on my bike and stopped.  Getting very frustrated, she'd even begun to cry.  I could tell because her eyelashes were still wet from it.  I felt bad for her and glad I could be of some help.  What is it with stranded people on the side of the road lately?! 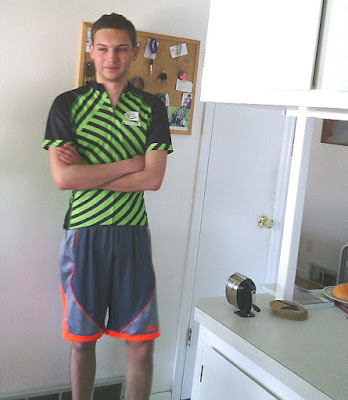 We chatted during the repair to take her mind off the earlier frustration.  She's about 19 and a student at the university, studying biology, she said.  My motherly instincts were in full operation, and I didn't leave until the wheel was back on and I was pretty sure she'd get where she was going.

Someday, this will be one of those feel good stories where she'll be some high-faluting doctor in the future, and I'll have some rare disease and she'll save my life.  And we'll be all, "remember that flat tire!?"

Then Chaco showed  up this morning.  He was out for a bike ride and swung on by to grace us with this fashion disaster:

Nice cycling jersey, but gym shorts?!  He said he realized just this morning that he doesn't have any decent shorts for cycling, just long pants but it was too warm.  Gym shorts it was, but proper shorts are on order.

Sorry I didn't have a patch kit for that!

Adorable dachshund! He looks all happy and comfortable with his wheels!

I'm not sure what Pirelli's are, but I gather they are expensive tires. We've got the same attitude with the kids' cars. Until you can pay for your own, you get by with what's necessary and nothing more.

Right place, right time for you and the damsel in distress. Someone like me wouldn't have a clue how to help, so I'm sure she was more than appreciative that you stopped to offer a hand.

As for Chaco's fashion sense, I'm not sure I would have questioned it. Young guys seem to have an anything goes attitude with color and style. They just own it and it seems to work!

I know Pirelli's as high-end sporty tires. Kinda funny to see them on this grocery-getter of a car.

The "damsel" repeatedly thanked me for stopping, which made me feel even more sympathetic to her situation since she seemed like such a nice kid. As for Chaco, it's funny how he can combine two perfectly fine pieces of clothing into such an ensemble, but you're right. I doubt any of his peers care!

I was thinking "that's a great top Chaco is wearing there!" Until I scrolled down and saw the shorts. Ha ha.

Oh and I love your drawing!

I'm glad all worked out okay for both of your stranded people. I'm not sure I'd want to hang out with the one who was ranting, but maybe the student made up for it? I think you've earned a couple of karma points. Love the drawing. What inspired it?

It is a nice cycling shirt, but his outfit made me think of trying to ride a bike while playing basketball?

That's a good way of thinking about it - the student made up for the ranter. As for the drawing, there was a brief news story here about an adoption fair specifically for dogs with disabilities, with more than a few in wheels!

Fashion disaster? Hahaha. But I don't believe it so.

If you look good and confident enough, wearing only potato sacks still make you sexy!

Well look at you. Helping another stranded "motorist". Linda's right. You're building up karma points.
I'm not exactly a fashionista, but I do know that Chaco looks a little mismatched. Maybe it's his way of obtaining a new running wardrobe from Mom. ?
Love the drawing. Glad to see an Illustration Friday post from ya! :)

Hmmm... maybe you're onto something. Chaco did mention the nice biking shorts that Wolfgang has (from Mom).
You never know when Karma points will come in handy!

Hm, dogs with wheels. Works for a lot of dogs, it would seem! A local vet of ours was one of the early people trying that sort of thing, probably 40 years ago!

I remember a little dog with wheels when I was a kid. Probably one of the pioneers.

"Told by an idiot, full of sound and fury, signifying nothing."