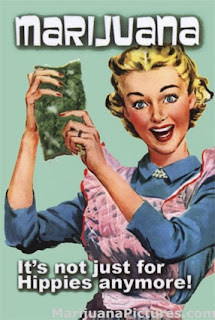 Well, I hope everyone had a happy Marijuana Day.   We celebrated in our usual fashion - by making no notice of it.

Meego had the day off school since a while back, many school districts in Colorado decided to give students that day off.  Marijuana Day coupled with the anniversary of the Columbine shootings deems 4/20 a bit of an Asking-For-Trouble Day, so it has traditionally become a Teacher Development Day.

I think it's safe to say that since recreational pot became legal in Colorado, the number and identities of resident users before and after has pretty much remained the same.  I understand that weed has become a bit of a tourist attraction, however.  Oh well, helps the tax revenues.  We've got more to offer than snow now.

But speaking of Meego and before-and-afters.  I was at the orthodontist's office this week.  Meego was getting his braces removed.

As I sat in the waiting room doing some reading for school, a woman of about 30 years old walked in.  I'd say the majority of patients there are kids, but just barely.  I'm a bit surprised at the number of adults - mostly women - with braces.  In fact, I sometimes run into our 50+ year old veterinarian there.

Anyway, the woman was rather tall and leggy with long straight hair.  Pretty.  As soon as she came in, the receptionist was all, "Oh, HI!  You're getting your braces off today aren't you!"

Tall pretty woman with braces replied quietly that yes, she was.

"You wanna be our 'before and after' for our facebook page today?!", the receptionist asked.

Hmm... so Meego didn't make the orthodontist facebook page, but lucky for him, his mom has a blog *COUGH*

I actually couldn't remember when that first evaluation day was.  Lucky for me, I have a blog, and what would oversharing be if it didn't include a kid's first day of orthodontia?  He's had braces for two years, but that first evaluation, I found from digging in the archives, was three and half years ago?!  Sheesh, he was just a little kid...

That's when we learned that his teeth were crooked, his jaws were misaligned, and if we didn't fix them, we were heinous child abusers.

But, he's made it to the promised land.  Monday, the braces came off.

Later that evening, Chaco stopped by.  He wanted some tax advice - WHAAAT?!  Oh well, that's another story.  I asked him if he noticed anything different about Meego. 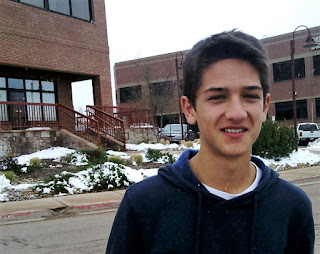 Okay, not quite the answer I was expecting, but then...

"Oh, he got his braces off!  Now his teeth are straighter than mine".

Linking up with Mama Kat this week for the prompt:
1. Throwback Thursday: Choose a photo from a previous April and write a poem or a blog post.

(I know the "before" pics are not from a previous April, but I thought they were before I found out the truth, and I'm not coming up with something else now...)

Big day for Meego! Bet you're both glad to have that over with. I'm also bettin' Meego was happy the pretty blonde came in and took what might have been his spotlight on their facebook page - knowing how camera shy he usually is.
I never think about marijuana day until I come here. In fact, I think you were the first one to educate me on what 420 is. Not sure what that says about you, but I'd say I'm a little naive. :)
You all may be known for your snow and weed, but I'm coming to Colorado this summer for other reasons. At least that's what's in my general plans. I'll let you know if/when I'm able to finalize things!

Meego was the one who told me it'd been two whole years (the technician told him), so yeah, big day. And yeah, best not be the facebooker of the day.
I'm kind of a marijuana day scrooge, but it's a bit hard to escape it here.
And you're coming to Colorado! Yipee! (I'll get my plants started now...)

Congrats to Meego!It's such a right of passage to go through the whole orthodontia experience, isn't it? My kids have all been there too. My youngest got started with braces the summer after 7th grade, and didn't get them off until the end of her junior year of high school. (Talk about bad parenting! We passed on some serious teeth/alignment/dental issues to our kids!)

Meego has certainly grown up since I first "met" you. How is that possible when we are not aging at all???

I LOVE Colorado and it has nothing to do with Weed. It has everything to do with the beautiful landscape and the friendly people. I didn't even know they had a Marijuana day, I'm with you, I'd be a scrooge about it too...crazy these "holidays" people create,huh?

Braces are interesting. 40 years ago, kids had to be convinced they were "cool" today if you don't have them you're weird. Proof positive that marketing works, huh? Meeego's teeth look great!

Popping over from Mamacat #17

Congrats to your son on his braces. Tell him to wear that retainer. My younger one got his off a few years ago, neglected the retainer, and now his teeth are crooked again. Doh!

my 68 year old sister just got braces! her mid life crisis has been going on for about 20 years.

to mark 4/20, i sparked a few buds and watched jay and silent bob strike back. time well spent.

I never had the orthodontia experience, and our older two made it through without. Magnum had plenty of hardware during his teen years, so I blame him for Meego's troubles.
Yeah, pretty soon our kids will be as old as we are!

Hi Christy! I like how out-of-staters typically say how friendly most Colorado people are - and it's not just from weed!
Braces were almost shameful when I was a kid, now they're the "in" thing. Who knew?

The orthodontist people told him about wearing the retainer. I'm going to reinforce that to him with your real-life comment!

Happy marijuana day to you AND your sis!

Nice! He looks great, and all grown up.

I have known several women to do the braces thing as grown-ups... I can think of 4 off the top of my head. Fortunately I have naturally straight-enough teeth, so I have never had to deal with brace face.

After taking them off, the office gave him a water bottle filled with chewy chocolate candies. I think the dental professionals are all in cahoots!

Hooray for him! It has been funny to watch the legal weed stuff play out here. Frankly, there are SO many more people into it than I thought, even in my professional circle. I feel a bit naive. It's not my thing.

Congrats to Meego! I went through that experience and getting the braces off was tremendous. Give him an apple or an ear of corn to celebrate. If Ohio legalizes pot I think you'll lose some tourist money. I'm glad to hear that you think the number of users stayed about the same, though I've heard some older ladies saying they've never smoked it and want to try it. Just what we need, stoned seniors?

It's not my thing either, but the ones I know for whom it is a thing seem pretty friendly... pretty much all the time.

Meego isn't one to over emote, but I think I sensed some "thrill" at having his braces removed.
Hmm... senior ladies. I know a few of those and now I'm wondering!

I'll tell him you said so!

My teeth are not properly in place when I got older. And I lost two teeth last year... I might hv to visit a dentist soon.
I dont hate the dentist, i just hate to see the bill.