hair of the dog and the pool boy

China starts to shed, I find and vacuum clumps of hair all throughout the house.  I brush her out and generate enough dog wool to make sweaters for the whole family, and yet she's still trapped underneath a full wavy coat of sheddy, clumpy fur that looks mangier by the day.  You can barely tell where the different dog parts are.

Then, when it seems the coast is clear, I take her to the groomers to get a nice butch cut.  That activity practically guarantees it will snow.  Really, it's more reliable than washing the car. 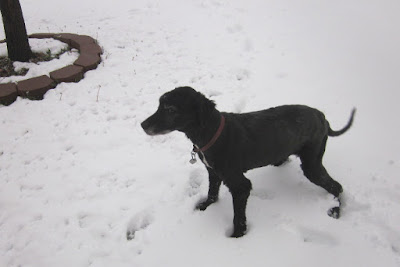 As I mentioned in my last post, China was shorn this week, so we got a bunch of sloppy snow dumped upon us.  It was that heavy, wet, spring snow that hardly even counts as snow as it's just laying piles of slush everywhere.

So yesterday, to escape all that wetness, I decided to hit the university pool(?).  Remember I mentioned how uncrowded it typically is?  Well, maybe those darn kids read my blog or something, because lately, it's been quite the place to be.  I don't mind it since it's not so crowded that there's not enough room for everyone to swim and I rather like not being the  only one sputtering along.

Let  me be clear, I am not a strong swimmer.  In fact, let's just go ahead and categorize me as WEAK.  I just figure that I'm paying for that nice pool use, and despite my obvious inabilities, I enjoy it.

So I was there yesterday doing my slow choppy crawl while the others were doing their fancy pants breast-stroke-one-length-flip-turn-and-butterfly-back business when this young stud asks if he can share my lane.  Obviously he saw me as the most attractive person in the water.  Either that, or I was the first one to have my head out of the water and sputtering long enough for  him to ask.  But let's go with the former assumption...

I said, "Yeah sure", and I knew right away that he's a much stronger swimmer than I am.  First of all, he was wearing a swim cap.  What GUY wears a swim cap unless he knows what he's doing?  We worked out which sides of the lane we would each take, and I waited for him to go first.  Instead of plunging ahead, he consulted his watch and waited for the crucial moment - second major  hint that he was going to kick my ass.

Then he finally did take off and I won't say it wasn't motivating.

Nonetheless, I'm hoping we get back to spring soon.  It's very white out as I look out the window now.  And poor China is here without her coat, but wanting to go for a walk.  She is (somewhere around) 16 years old, but still loves her daily beauty walks.  And the snow really brings out the puppy in her.

She frolicks around and sticks her face in it and acts like other young pups.  She's just a bit slower and uncoordinated, but she's into it. Kinda like me in the pool.

Here too, the increase in shedded dog fur around the house is a sure indicator of spring. Except we don't get wooly clumps. Lucy's fur is wiry and clings to everything. It's a serious workout to get it really cleaned up. Thankfully, no annual grooming is needed because her coat is very short. And I'll stop complaining now about the week of rain we just had. It could have been snow!

I admire your willingness to use the pool - and share a lane with a serious swimmer. I never had lessons, so I can pretty much just keep myself afloat, but I'm pretty sure I couldn't do laps across and back. Too bad too. The pool at my gym rarely gets used.

China's hair does tend to fall out in clumps, which I think makes it easier to see and clean up than the clingy stuff - the cat compensates for that. And yes, the grey skies are snow are bringing me down!

We had swim class for half the school year in 7th grade. That's where I picked up anything resembling "technique". I got a Y membership and swam laps during my lunch breaks when I was pregnant with Chaco. It was a nice pregnant lady activity, and that was the last time before now that I was a lap swim kinda girl.

My 15 yr old puppy is shedding cats and sheep too, but I just wait it out every spring instead of giving her the beauty shop. Maybe it's wrong, but I'm feeling pleased to know you're "weak" swimmer. All your running and biking can make me feel like a slug, but I can swim :)

Years ago, I use to shave the dogs myself every spring. Whatta job! I appreciate groomers. And you can be very pleased about my swimming "prowess".

I am the weakest swimmer. I always got a D in swim class because they can't fail you if you try, in P.E. If they could have, they would have given me an F. Or an S, for sinking. (Or maybe... I just thought of this... the D was for drowning!)

Ha! I like that. D for drowning (the wit, not the drowning)

I love China's shorn look! But you're right, it does seem to bring snow each time.
I'm willing to bet my swim technique makes yours look strong. I can keep my head above water, and get myself from one end of the pool to the other using a variety of my own unique techniques. :)
I sure hope this is the last snow fall for you. Like Terri, I'm happy we got rain. Lots of it, but way better than snow.

Every. Single. Time. We had grey skies and crap four days in a row. I'm not cut out for that!
Keeping your head above water is pretty important, so glad to know you've got that technique down :)

I didn't expect her to still be here, so every day is special :)

I don't believe you when you say you are a weak swimmer! I used to be a good swimmer, until I got old and lazy. And yes a man in a swim hat means business for sure!

I can drag myself back and forth in the pool, but everyone else makes it look a lot easier than it feels for me!