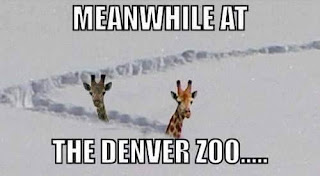 Greetings from springtime in the South Pole Colorado!  It's a beautiful sunny day today.  We just got back from picking Chaco and Wolfgang up from the airport.  They went out to L.A. for a few days to visit Magnum's dad and stepmom and Flop.

I told Wolfgang, "Everytime you go someplace nice on vacation, we get crap weather back here".  Just like Thanksgiving when he left us in the deep freeze.  Holy Guacamole, we had us a bit of weather yesterday.


Blizzard, so exciting.  In fact, Wolfgang texted me from sunny California yesterday when the university sent out an alert that they were shutting everything down at 1:00 pm.  "I got an alert from the university.  Have you guys been getting a lot of snow?"

Magnum, Meego, and I were actually driving home as we had gone down south to hometown to take care of some business regarding my Dad.  I sent Wolfgang this pic I took as we drove passed the university... 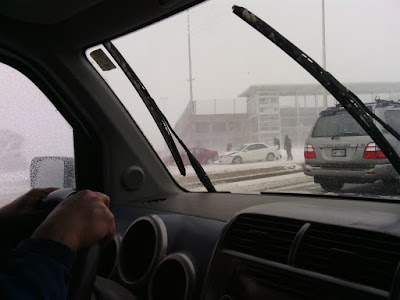 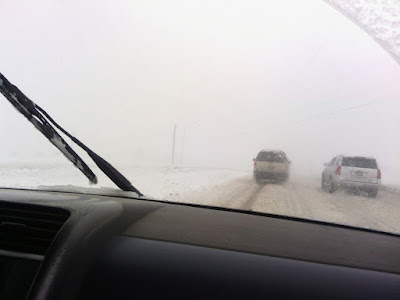 
Meanwhile he sent me this...


But I must hand it to Ellie Mae, and maybe Magnum, the driver, gets some credit too.  Things really got messy, but that Honda Element, as funny as she looks, gets it done.

I feel bad for the many travelers who got stranded by the storm.  Sitting in a car for hours on the side of the road during a major winter storm is inconvenient and frustrating and can be downright dangerous.

Years ago - February of 1984 to be exact - I got stranded in a similar storm.  I played on the women's basketball team in Jr. College, and we were coming home from a game in Sterling, CO.  Sterling is out in the barren flatlands that might as well be Kansas.

We spent a few hours stranded in our van before a road grader dug us out and had us follow him to a remote church where we spent the night.  At least I wasn't alone and had teammates and coaches to keep things light.  I remember our coach making jokes in the van about what to do if we needed to "use the bathroom".

Oh, the power of suggestion.  Stop talking about it!!

Suffice to say that, pissing in a snowstorm in 60 mph winds with a few friends and other stranded motorists is not something I will likely forget anytime soon.  Or have any desire to do again ever.

After yesterday's storm ended, Meego and I set to shoveling the wet heart-attack snow off the driveway while Magnum tackled the back yard.  It's good that we've experienced recent wildfires.  It helps us to appreciate these things.

*Blizzard better than fire*.  Our mantra with every shovelful.

Man, that blizzard sounded bad, and I heard about all the canceled flights. Spring is just around the corner!

It was quite a storm. It's the first time I remember a meteorologist admitting they had underestimated.

Oh man that's rough getting those nice photos when you're stuck in that weather. That dolphin is just rubbing it in.

Spring in Toronto is icy. The city was like one big skating rink yesterday. Fortunately I had the option of staying home, which is exactly what I did.

I like the Denver Zoo image. :-) It's good to know that you got home safely!

I've never been to Canada - other than Niagra Falls - but it sounds icy!

Seems every time we fly south during the winter, we bring the cold, wet weather with us. This time was no exception. Can't complain though. We found some sun, and unfortunately I have proof.
Anyway....
So proud of Ellie Mae and Magnum for getting you through the snow. I went for looks with the Mustang, and that's all she's got going for her.
Hopefully this was your last winter hoorah and that you've turned the corner. In the meantime, keep Wolfgang and Chaco at home!

Well, the Shadowmobile does look good...
I hope you had some fun on your southern adventure, despite being stalked by mother nature!