Yesterday, I was installed as Grand Poobah President of my P.E.O. chapter.  It wasn't at all unexpected as I knew this was the natural progression after they'd asked me to be vice prez last year.  And really, not a whole lot is changing due to the fact that our outgoing President ended up having to miss several meetings this past year, so I was obligated to jump in and run about half of the show.  So much for veeps having nothing much to do.

Before handing me all the presidential goods, the outgoing prez bestowed gifts upon all of her officers - a 6-pack of Rocky Mountain Chocolate Factory truffles - to which one officer lamented, "Crap, I gave up chocolate for lent!"

This also isn't too daunting a task since I've served as a local chapter president before with my previous chapter.  Once someone joins P.E.O., she receives an official P.E.O. star emblem to wear to meetings.  Traditionally, once a member completes a term as chapter president, she receives this gavel guard that attaches to the emblem: 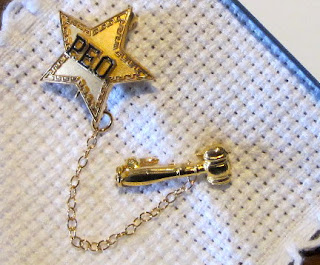 I remember when I first got that gavel guard.  It seemed like such an honor.  Now, I see it has another function - as when a member transfers to a different chapter, and she has a gavel guard, it tells everyone, "Hey, she's been a sucker before, bet she'll do it again!"

When I got home from the meeting, schlepping in all the presidential gear, Magnum greeted me with  Hail to the Chief wafting from his phone.  We then got into a discussion over whether "Chief" was a masculine or genderless term.

We concluded "Chief" is genderless, FYI.  Nonetheless, no one will ever call me "Chief" at a P.E.O. meeting.  Hopefully.

Then I got a text from one of my sisters saying she found a yearbook (member booklet that has all this tip top secret stuff in it) after the meeting.  Was it mine?  I realized that it probably was.  Apparently I was so concerned about making sure I secured my chocolate truffle 6-pack, I totally neglected my yearbook.

With that and the fact that it was another nice spring-like day, Magnum and I had a mission.  We summoned our bicycles and headed out to retrieve my top secret documents!*

So that was fun.  It lead us to a bicycle route we'd never taken before, and also made for a good ride of well suited distance.  Any excuse for an adventure, and my negligent behavior gave purpose to our ride.

So far, after 24 hours in or so, my presidential reign, while not without mistakes, is going well.

*blog content regarding the mission may have been somewhat embellished.

One of the signs of a good leader is being able to admit one's mistakes, and correct them. Check, and check!

I was about to ask you what P.E.O. is, but then I saw you had linked it. Very cool! Good luck as the Big Cheese/Poobah!

I don't think I would've agreed to take the office if there was a "no mistakes" requirement!

I got into P.E.O. because my mom was a member. Growing up, I thought it was just a bunch of old ladies, but it is actually pretty cool.

Congratulations! Magnum's welcome home song cracked me up.
We've had such great weather, haven't we? I'm a little nervous.....

Yes, all that fanfare was quite fitting. But where was my red carpet?!

I'm a little nervous about the mild weather too - like something's brewing in some back room somewhere!

Congratulations! No one in their right mind turns down truffles. Send them my way.

Chief sounds cool to me. Loving the star bling. Ha. So do you wear a uniform too?

The truffles were a perfect parting gift!

Nope, no uniforms, just the star bling, which is only about a half inch in diameter. It doesn't hold a candle to your collection :)

I like the Grand Poobah title, and the whole Girl Power thing. :) After my Board term is up, I might circle back to get more input on what you're doing.

That would be "Madame Grand Poobah" I suppose.
Board term?

Congratulations on your Grand Poobah-ness! I'm sure they're all glad to have a fairly willing "sucker" like you to lead the pack.

...for a private school. My 3 year term is over on June 30. I was offered another term, but decided not to re-up. I've learned and experienced much, but ready for something else.