your legs are fine

I don't know about y'all, but I am glad to say good-bye to February.  I remember when we lived in upstate New York, and the winters would be soooooo long.  A friend who'd lived there all her life advised  me, "Just get through February".  It was a mildly helpful strategy.

Now, I don't like to whine, and I really don't like listening to other people whine (is that whining?), but I just want to give a quick rundown of the crap of this past February:

And really, February wasn't all bad.  There were definite bright spots, but I am feeling glad about turning a page on the calendar.  The days are getting noticeably longer and warmer.  After our mild excursion during last Saturday's power outage, Magnum and I did a more rugged hike on Sunday.

We went to an area that is popular among the locals, but in all our 12 years here, we'd yet to check it out (losers!).  It has the creative name of "Section 16", which to me sounds like some sort of extraterrestrial alien research center.

But it's a beautiful place to hike, don't know what took us so long to get out there.  As we were slogging through some particularly rugged parts, we were commenting on how difficult it would be to mountain bike there.  No sooner did we start commenting, than crazy people on mountain bikes started going by now and then.  We noted that they were all quite young and resilient/crazy...

So here's a fat photo from the hike for a little I-spy.  See the tiny people on the big rock? 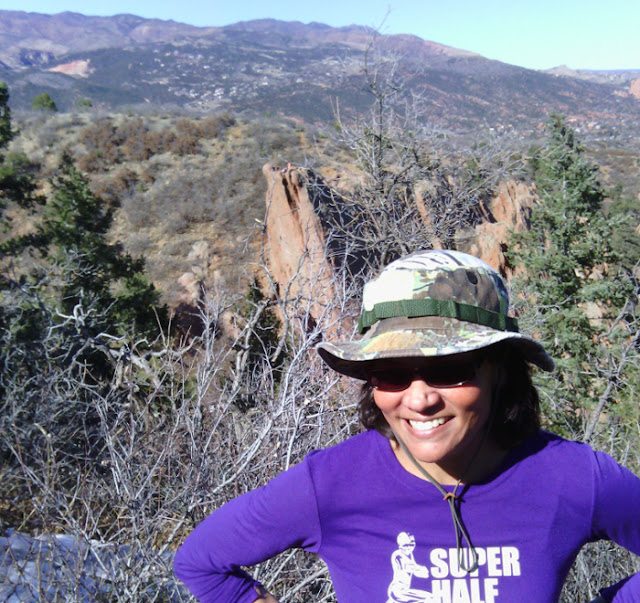 We eventually made it over to the big rocks too, which weren't as scary as they looked from the I-spy point.  In fact, someone had put a geocache in the area that we managed to add to our collection.

By then the wind had started kicking up, and so to avoid being blown off the big rocks, we made our way back down the trail.  There were several others out enjoying the day as well.  We passed one family of what I assume were Mom, Dad, and daughter of about 4 years old.

Magnum did a bit of an ankle twist near the big rocks - his own version of "m' legs!", and I totally ignored it in my version of "Your legs are fine (and I sure as heck am not carrying you off this mountiain!)"

All in all, a good time, and with that, we made it through February.

I always wondered how the shortest month of the year could feel like the longest. So far, March has been good...of course at just 3 days in, it's still a miracle for around here.

Congrats on getting through that awful February! I, too, am so glad to be in March with spring around the corner. (I hate the cold and barely get out unless I have to all through the winter!)

By George, you're right - the shortest month IS the longest! A 3-day streak, I'll take it.

March is traditionally our snowiest month, but it's just friendlier snow than February snow. I can deal.

You made it through February! (Even with that extra day!).
Even if March is just as cold and snowy as February, it's still a spring month. So yeah, we can deal.
Plus, I'm going to Florida in March. Wanna go?

Leap year seemed all the more longer!
Hmmm, do I want to go to Flo...YES!

The best thing about February is that it's a short month. Except maybe Valentine's day, because chocolate.

I'm glad it's March too. It's time for the weather to just stay warm. I'm tired of the back and forth thing. My husband does all the whining when I make him go on a hike or a walk. He goes at least, but there's an insane amount of complaining I have to put up with.

You can whine. I give you permission. You rarely do, and sometimes you just need to get it off your chest. Besides, you had some pretty significant stuff to deal with. As you know, I can relate in a couple of areas. I'm sorry about Wolfgang and the girlfriend. I hope he's handling it as well as one can handle that kind of thing.

I am welcoming March just as enthusiastically as you are. It's looking quite possible that winter has made an uncharacteristically early departure from these parts. (Knock on wood!)

Yes, at least there is that balance.

I read some article a while back that said listening to people complain makes us "stupid". So I just tell Magnum, "You're making me stupid" when the complaints start. It scares him straight.

You and I do seem to be on a few parallel paths recently. What say we both win the lottery?