I'm here playing with myself... er... playing with my blog settings and cleaning out some phone pics.  So I thought I'd put up some fat photos from this week, see if they fit, maybe play a little "I Spy" 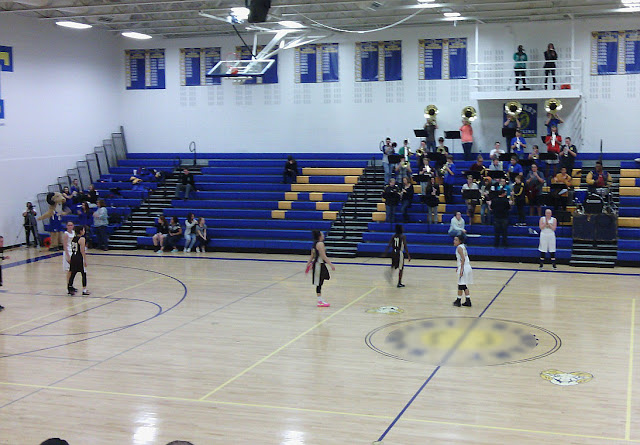 Extra points for anyone who can spy the school mascot!  I see him!

Photo galleries for the Super Bowl half marathon were published.  Looking at them now, the snow is kinda pretty, rather than the "razzum frazzum fricker frackum" snow it was during the race. 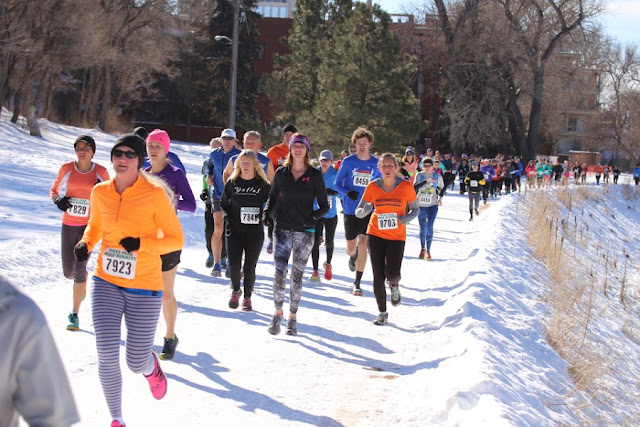 And now for more photographic skill pleasure, Meego's jazz concert.  Like a bunch of (faceless, dressed in black) Amish doll musicians!  That's as good as it gets with my phone in a dark auditorium.  At least the music was good. 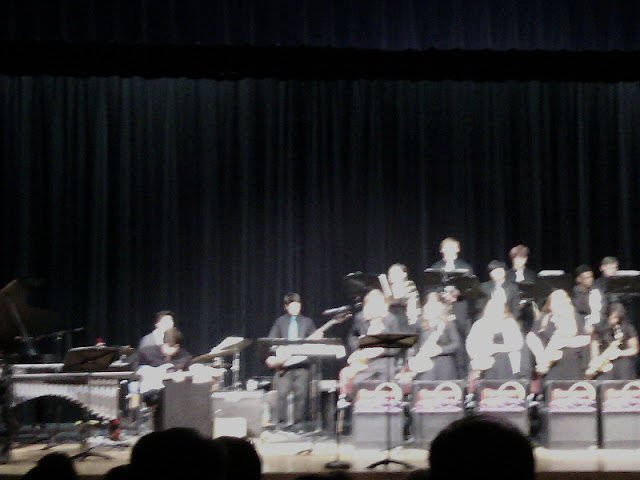 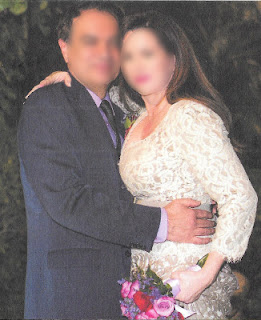 Brother Hagrid, man of mystery, and my SIL recently renewed their vows.  I can't post pics of Hagrid.  I can of SIL, but in keeping with the blur theme...

I did get together with Hagrid last week, to go over some stuff regarding my dad and just have a nice little catching up time.

I often look to Hagrid, as he's 15 years older than I am, to gauge my genetic near future.  Things look pretty good - look, hardly any wrinkles!

I see the school mascot, but I can't tell what he/she is. Could be your phone photo, or more likely, my eyes. Oh wait ... I just looked again and am thinking it's a ram. Which kinda helps makes sense why my first thought was Jar Jar Binks.

The marathon photo does make it look like everyone is out for a lovely jog on a beautiful, mild winter day.

There's no spying anyone in that band picture. And even though I know Meego plays bass, I'm second guessing whether that guitar player is actually him!

Hagrid is 15 years older than you? Blurred faces aside, he and the SIL don't look to be in their sixties. Good genetics are nice, but you clearly do a lot to ensure your future health is as good as it can be.

I see the mascot on the left...looks like a ram to me too. Great picture of the marathon. I don't have a James Bond in my family...it's more like Duck Dynasty.

I see the mascot as well. And I can tell what he/she is. Of course, there are a few "hints" in the shot that makes it easier to guess.

The half marathon shot is pretty nice, although it looks a wee bit chilly. I have the same observation - the course doesn't look quite as nice when I am running it. I always find it interesting that, even with frosty temps and a snowy course, there are still those hard core runners out there running in shorts and sleeveless shirts.

I think I spy Meego on his bass the band shot. Seems like all of our band pictures were dark & fuzzy as well.

I'm with Tee. Hard to believe that Hagrid is in his mid sixties.

And what's on my phone, probably way too many dog pictures. Although there is an interesting one I may have to share. Hmmm.... Blog fodder.

Good eyes! Yes, he's a ram and not Jar Jar Binks - Thank GOD!
The standing bass player with the tealish tie is Meego... I think.
Yeah, Hagrid's an old dude.

Another mascot spotter! I told Magnum I thought, based on how it moved, that there was a girl in that mascot costume. Does that make them ewes?

Yeah you spotted Mr. Mascot! Good use of hints, too.
There were a few barely clad runners - mostly toward the front. I saw quite a few I felt were overdressed too. That, and I passed or was passed by several Peyton Mannings.

When I got my phone, the sales guy told me it wasn't a good one for selfies. Not a priority for me! But I think he could've just said "photos" instead of specifying selfies!

I found the mascot! That is a pretty sparse crowd for the basketball game. I shouldn't criticize though... I have never been a sports spectator for any type of team. Good on you for getting out there and supporting the girls!

Love "Amish doll musicians" :) You're making me regret that I just dumped the photos on my phone to start over. Also making me feel like I should attend some girls' basketball to help fill the stands.

I scrolled further down in your posts and saw the news about your dad. All my sympathy and best wishes for you and your family.

Most of the spectators were on our side of the gym, but still. There was room for more!

Someone gave our kids an Amish boy doll several years ago, and it was the first thing I thought of when I saw the concert photo. Thanks for the nice thoughts :)

I found everything too! Got any prizes left?
Your run certainly looks beautiful, but I imagine it was tough in some spots.
And if your brother's genes are any indication as to what you'll look like in 15 years, I'd say you're pretty lucky. :)

I wish I could blur myself in real life like I can in my photos. Have you ever watched NANCY GRACE, the news reporter on television? If they blur her any more, she'll look like a bowl of melted jello.

I had to google Nancy Grace, and then I realized I've seen here - sort of.

Spotted the mascot and you right away. Tried a process of elimination for Meego, but no luck. Maybe if I could've remembered the instrument he plays.

A bunch of random junk is on my phone. There are screen shots of text - just in case I lose my Goodreads entries before posting... stuff like that. I need to delete it. Also found a donut picture that I texted to my neighbor. She gave us a dozen during our 14 inches of snow. (HER vehicle could handle it.) I was letting her know how fast we'd eaten them.

I'm laughing at the thought of the snowstorm donut!