I'm sitting here watching my email for inputs from teammates on a final group project for school.  Lemme just say, no matter how nice the teammates are, group projects for an online class are a pain.  We all have different schedules and obligations which is why we're taking classes online in the first place.  Heck, one of our teammates doesn't even live in the same time zone.

But it will get done.  In fact, I've got the whole thing ready to ship, I just think the others would want to have more of their fingerprints on the thing, however virtual.  Either way, it's nice to be at the end of another semester.  Wrapping things up with these final projects and final exams before the long winter's sleep break.

Speaking of school, I was on campus yesterday for a bit.  The mood was respectfully somber as yesterday was the funeral for Officer Swasey.  There was a notable presence of police and other first responders as the campus was preparing for the funeral procession, which was absolutely huge.  Also in his honor, a blue light replaced the usual white light in the campus clock tower for the past week.

So it was quite the outpouring of support and respect as the motorcade left campus for the funeral, and during the whole procession afterward to the cemetery.

In other school-end-of-semester news, Meego finally had a band concert for jazz band this week.  We were wondering, thinking one was due.  At the concert, I saw another  mom friend of mine who was thinking the same thing, wondering "Did we miss it??" 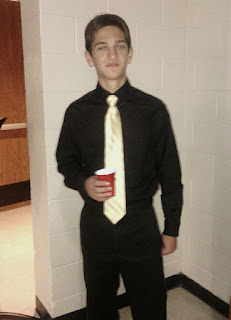 But it happened, and they put on an entertaining performance.  Meego on his new Thunderbird bass.  I'll say that the new bass does have a nice stage presence, pretty.  Sounded good too.  I tried to snap an obligatory cell phone photo, but it was crap.  I did get this less-crappy-but-still-grainy photo of Meego at the formal reception afterward.  You can tell it's formal because of the mini solo cup.

So although the Thunderbird is sadly absent here, it's just such a rare thing for Meego to be wearing buttons, let alone a tie.  It needed to be documented.

So I want to know did Meego choose the tie, or did you? He looks very smart. Although the cardboard cup does rather spoil the image. :D

Oh, heck, he chose the tie. Unless they ask, I gave up giving advice on clothing choices when each kid was about 3 years old - waste of time around here!

Online group project? That sounds like a nightmare to try to pull together. At least winter break is just around the corner.
Nice to hear you didn't miss the jazz concert. Meego looks pretty good in buttons! Did he actually pose for this pic, or did you sneak up on him? I have to be sneaky with Amp, otherwise I get a pic of his hand over his face.
The blue clock tower light was a nice touch. I'm sure that was a somber day for all.

I hate group projects. I feel like hitting people with sticks to get them to do their parts, and it seems like that would be really hard through the internet and different time zones. My sympathies to everyone effected by the shooting. I wish I knew how we could make this kind of thing stop. Meego looks handsome all dressed up.

This is our third - an thankfully, last - group project for this professor. My team seems like a nice bunch, but I think the class opinion that these are a pain is unanimous.
Meego agreed to face me and hold still for a second while I snapped the pic. He probably figured he wouldn't be very recognizable in that outfit anyway.

I think the group projects are assigned to help us build our leadership skills,but I find it hard to say, "Just put your fricking graph in the dang document already!", electronically.

Is it my imagination, or does Colorado make the national news a lot? It's tragic and heartbreaking about the 3 lives lost.

On a happier note... Meego looks marvelous in the less-crappy-but-still-grainy photo. The two of you make an interesting duo as you conquer school projects and activities together.

Nice that the university honored Officer Swasey that way. Such a sad situation, and I'm sure particularly more difficult during this time of year.

Meego cleans up nicely. Too bad the Thunderbird couldn't make it into the shot. Maybe you'll get another chance, say in about ... three months?

It's not your imagination, Colorado seems to take its share of beatings. And it is a bit weird to be commiserating with Meego on the "joys" of final exams.

I learned that the university police force is 25 officers and 7 dispatchers. They're always friendly and helpful when I've had dealings with them. A close group that I'm sure will be reeling for a while.
You're probably right with the timeline for the next dress up!