And so ends another week.  Thanksgiving has passed, now onto the chaos of Christmas season.

I was going a bit stir crazy today.  We haven't had sun for four days - a rarity around here.  At first, the thought of being holed up at home to take a load off, read, watch Netflix, whatever, was pretty appealing.  But after a coupla days, I was going a little bananas. Thankfully, I got out today for a rousing time of grocery getting.  It was just nice to be out in the world again, and out of the  house, out of the neighborhood.  I would suck at being a recluse.

I also got caught up on some housewifery, and I have yet one other errand to run.  The toads need a new light as theirs burned out.  Seems they've temporarily had to go without their needed "sun" just like us.

Despite the grey skies and chill, it was a nice Thanksgiving week.  We got in the sloth time as mentioned, plus enjoyed some good food and family time.  I have  yet to get full details from Wolfgang, but I'm betting he had a rip roaring good time in Hawaii too.

Magnum and I finally watched Mad Max: Fury Road.  I really liked it.  I knew it got very favorable reviews, but  honestly, it wasn't something I cared about seeing.  But he brought home the DVD, so I said I'd watch with him. 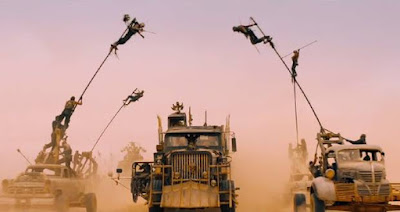 What a ride!  Literally!  But it's beyond just two hours of stuff blowing up, although it is pretty non-stop, gritty action.  I just thought it very creative - artistic really.  Stuff blowing up artistically?  Okay.  I'm sure it was all the more impressive on the big screen.

Now back to reality.  Of course, the university issued an official statement regarding Officer Swasey's death in the line of duty on Friday, and there was a candlelight vigil last night.  I'm sure it will be a rather somber return to classes next week.

These holiday breaks always seem to go by too fast. I was really looking forward to a four-day weekend, but like you, I find myself here at the end of it, feeling like I need something productive to do. Getting back into routine will be good, I guess.

So sad - the death of Officer Swasey. His family is in my thoughts and prayers.

I could have totally used your help at the hotel. Had I known you were getting cabin fever I'da called on you! And you coulda picked up a toad lamp on your way back home. Win-win!
I've seen bits and pieces of Mad Max, enough to make me think I should watch the whole movie at some point. If I'm ever holed up in my house for a few days, I just may rent it.
My thoughts and prayers are with the family of the officer, along with your community. Hopefully some good will come out of this all.

I'm looking forward to getting back into the swing of things. I think!

Ah, bummer! I do sometimes miss the hotelling days. Hospitality time AND a toad lamp! Well, at least I got the toad lamp.

That movie is great. Can't get enough.

It seems that Colorado has had a lot more than its share of these horrible incidents.

We were just noting our abundance of negative news. What is it? Lack of oxygen to the brain??

That shooting made the news over here, managing to break through the noise about whether we should or should not bomb Syria. It is sad when good people die like that.

I suspect that Mad Max will feature in my Christmas holiday at some point. Looking forward to the artistic explosions!

I think you'll like Mad Max. No zombies, but there are these wonderful War Boys.
Plus, I think it's a bit better movie than the Sharknado series *cough*cough*.