I had China at the vet's late last week.  She had this puffy thing under her left eye, see it? 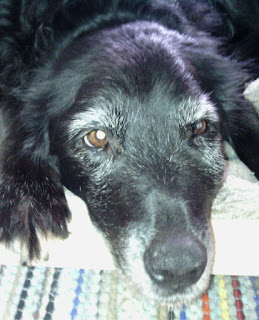 The Dr. determined that it was a tooth abscess, and that the tooth should come out.  Okay, easy enough.  EXCEPT (don't you just hate when there's an "except"?), the bloodwork to determine if she was clear for anesthesia came back saying, "Nope!"

A couple of abnormally high liver enzyme counts had me with her at the ultrasound place this week.  She has a "mass" in her liver, that we are waiting on the pathologist to analyze.  Magnum googled and found that "Hepatic nodular hyperplasia" - a seemingly benign lesion - is a common thing in older dogs.  She seems to be her usual self, so we're hoping that's all it is.  She's about 15 years old, just an estimate since she's from a shelter, so we're not shocked to learn of these things.

In the meantime, she's taken a course of antibiotics that has taken pretty good care of the abscess.  For now.  But the bad tooth - it's still in there.

The silver lining is that she doesn't seem to be bothered by any of this.  In fact, the things she does find bothersome are going to the vet's and the ultrasound place.  She actually looks forward to the pill popping.  I guess that's understandable since we wrap them in lunchmeat.

In other news, we got this cute little cactus when at the nursery getting our Christmas tree.  We haven't had much luck with houseplants.  I blame the lighting in our house and my nongreen thumb.  But this cactus called to us, so we brought it home and named it Roscoe. 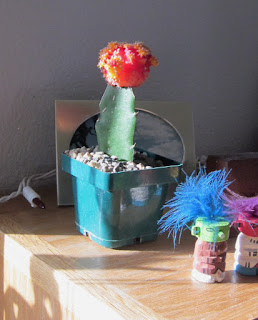 This week has been  nice with Christmas and family time.  And while a lot of the east coast has enjoyed unseasonable warmth, we've had a rather "blue" Christmas... 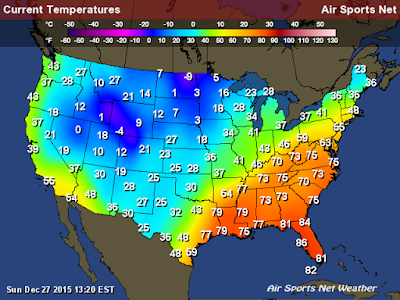 But it's allowed me to take care of some indoor projects during the downtime - along with a healthfully slothful dose of recreational reading and Netflix.  And now Chaco has taken some more bulk from the old bedroom, leaving all that much more space for Meego.  We were straightening up some yesterday, and I told Meego I would help him rearrange things today.

Aw, poor China! Health issues are no fun, even if she's not really bothered by them. I hope all the results come back good and she can get all fixed up again.

Your cactus IS cute. I was given a Christmas cactus for Christmas. Hoping I don't kill it. I remember giving one away to my mother-in-law years ago because I was ... pretty much killing the thing. I also have a poinsettia, left over from my dad's funeral flowers. It's not looking so good. I gave it more water and put it in better light and am hoping it perks up in the next few days.

Considering how busy you've been with school and homework recently, I'm sure you're glad to have had so much downtime. We spent the past couple of days here being sloths. I have to go back to work tomorrow. Good thing too. If I don't get back to routine, I'm going to do nothing but sit around, eat and get fat.

A drum set? Betcha you end up with a real live drum set in your house soon! :-)

So sorry to hear about China. Good to know it doesn't seem to be bothering her too much. Hope it isn't the start to more problems though. She's getting to be that age. :(
Love your Christmas cactus. I gave up on live plants a long time ago, but cacti seem to be pretty hardy.
Our weather is getting a little bluer with each passing day. Not blue enough for snow though, just rain - enough to cause major amounts of flooding.
And oops! Did you just commit to a drum set?

Poor China. I am sorry to hear about her troubles. It really breaks my heart when our furry kids have these kinds of problems. Claire has some issues as well but she is a real trooper and never lets it show. I hope that the results come back clear and she feels better soon.

Nice Christmas cactus. It should weather the winter well with minimal attention.

It's been unseasonably warm down here up until last night. Low 80's on Christmas day but that's all changed now with the onslaught of storms and rain over the weekend. Not as bad as our neighbors in north Texas had it, thank God.

Sorry to hear about China. I love any excuse for slothfulness. Ha ha on the drum set!

Poor puppy! My puppy is about the same age and lost a tooth on her own. She doesn't seem to care either. Don't you wish we could be more like dogs sometimes instead of stressing about things?

In my gratitude list I have now included the fact that I didn't do winter camping this year. It was a green Christmas for me according to your map. Mostly I thought it was wet from endless rain, but I'm also grateful that I don't have to shovel rain.

Wishing you the happiest of new years!

i was talking to someone from vegas today, between their being freak cold and our being freaky warm, on average we're just where we should be! I am ignoring the dog part

Hi, Abby! Best of luck with China; I hope all tests come back with nice results.

And! I was in Colorado in Sept. for two amazing weeks. I thought of you (in a non-creepy way). Jealous you get to live there. We had the vacationers' "I'd LOVE to move here" sensation.

I was reluctant to bring the cactus home, given my track record. And it looked so happy at the nursery. We decided to forego the Christmas cactus, though. I think I'd feel even worse if I killed one.

I'm sure you missed Chancie at Christmas this year. China's an old lady - has been one for a while.

I hope you're steering clear of the floods! Scary. Stay safe.

I can't complain much about the weather seeing what other parts are going through!

There is still room in there for a drum set. I'm not pushing it!

China pretty much just rolls with everything. It seems we'd never know there was anything wrong with her if we didn't go hunting for stuff.

So it all just averages I guess, even if nobody is "average"!

I'm glad our state accommodated you so nicely! If there's a next time, look me up - since I doubt you're as Cranky as you pretend to be!

Aww poor China. My cat has had some infections due to teeth. I hope everything comes back good and they can get that bad tooth out.

Roscoe the cactus... now that's a first. I never knew you can call your plants with pet names! Hahahaha :)