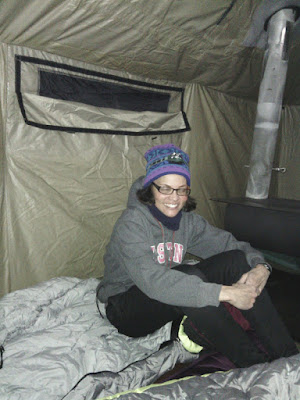 After all the build up, the day finally arrived.  But enough about Star Wars...

We did survive another night of We're-Not-Homeless Appreciation.  It seems to get easier every year.

We bedded down last night once Magnum got a cozy fire going in the tent stove.  In fact, it was downright HOT in there for a while.  Temperatures outside got down into the low 20s, but we stayed pretty comfy in our survival sleeping bags.  And yes, I wore double leggings, under the warmups!

China and Napolion came out for a while as we got ourselves situated, but then seemed to do a collective "You guys are stupid!", then headed back indoors.

I remember waking up once during the night after the fire had died out, and it was noticeably chilly.  I just mummified myself further.  Meego had a similar experience.

"I woke up and the fire was out.  There was drool frozen to my face..." 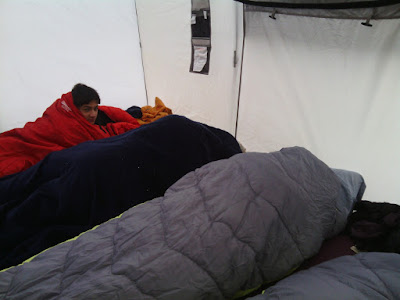 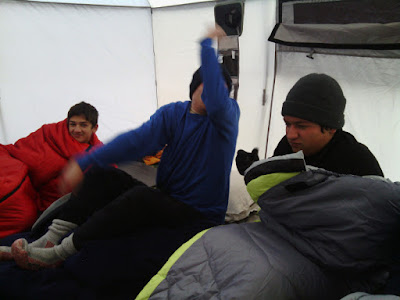 Chaco's not keen on having pics snapped of him upon waking from hibernation... 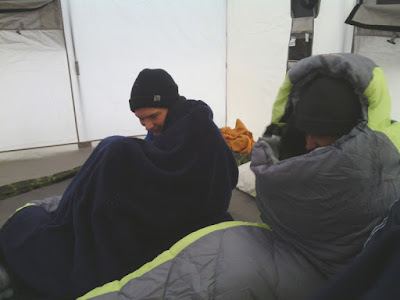 I've got stuff cooking now, in the comfort of our real house.  Chaco and Wolfgang brought sweet corn muffins last night - well, the mix anyway.  I baked and Chaco made the "Honey Butter Topping".  They're all gone now.  We did some game night, and somehow the muffins disappeared.  Extra layer of fat for warmth?

And that's pretty much our Christmas.  Eat, freeze, eat some more.  A few gifts thrown in.  All good.

Well, I feel a little guilty now for complaining about being cold last night, in the comfort of my own bed, with a pile of warm blankets on top of me. I have no desire to sleep outdoors in the winter if I don't have to. But as I've said before, I admire you for your tenacity!

Merry Christmas! So glad you were surrounded by all of your boys!

Merry Christmas Abby! Not sure why I get jealous when I see you all freezing your tushes off (or your drool in Meego's case), but I do. Glad to hear you all had a good day. Nuthin' wrong with a few extra muffins for warmth. Except when your Christmas Day was 60 degrees like ours was. I don't have an excuse for all the eating I did. :)

It wasn't bad, but I was happy to be back in my own bed last night!

It's another blustery day here, so enjoy your unseasonableness!
I guess there's just something about suffering together. Meego's frozen drool just brings us closer, I suppose :P

I am not a fan of outdoors camping. I may have the same mentality as your pets, haha! Foolish humans! :)