We had another fine week here.  As I adjusted to being finished with another semester, it was a productive week in getting non-school tasks out of the way.  Some of that involved making way for Chaco and Wolfgang and all of their dorm crap.  Somehow, it has all been squeezed into the house.

In the midst of the college boy flux, Meego turned 15 on Thursday!  My Mother's Day bambino is not so little anymore. 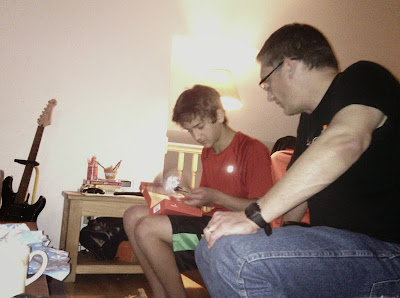 Despite the moving and shaking going on, we all managed to celebrate with him on Thursday with cake and presents.  Then yesterday, we all went out for some Famous Dave's and saw The Avengers.

So now Meego has to continue schlepping to school for two more weeks while his brothers are on break and rubbing it in his face.  Chaco and Wolfgang are both set for summer employment, though, and that's certainly a good thing.  Chaco has an internship here in town and Wolfgang is continuing with Edukit.

I got China in for her early summer grooming this week.  She seems quite happy to be free of her long winter coat, and I'm certainly not complaining about the decreased amount of house hairiness. 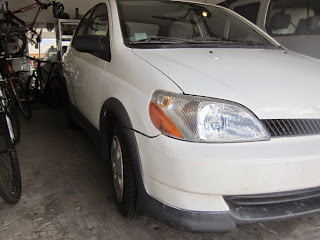 We've managed to dry out somewhat from our week of drenching.  I've got an appointment to get the Echo fixed after getting a few estimates.  So far, I like the chosen shop and hopefully, that opinion will remain after the repair. *fingers crossed*

On a side note, the waiting area of the chosen shop has a nice, healthy looking fish tank with large  impressive fish.  It served as a reminder of the fresh heck that is my own aquarium.  I'm starting to think those monsters will never die.

I wish my 16 year old daughter could find a part time job during the summer. She has 13 weeks off. Deep joy.

Good luck with the car repair!

Well Happy Birthday to Meego! Famous Dave's and The Avengers sounds right up his alley. I'd just be happy with Famous Daves, in case you're wondering what to get me.
As for the older boys, it's awesome that they both have summer jobs. Amp's looking for something a little more full time than what he has now, and I hope he finds it. I can't imagine him wasting the summer away.
Good luck with the "chosen shop"! If anything, you'll have nicer fish to look at.

Good luck to Amp! Finding good summer employment can be tricky and summer is so easily wasted.
We'll see about this body shop, maybe the good fish juju will rub off?

I loved Avengers! Nothing like a good superhero movie.

Happy belated birthday to Meego! Famous Daves and the Avenger's sounds like a fun way to celebrate.

Happy Belated Birthday to Meego. Good to hear he was able to enjoy his birthday with some burgers and a movie. FYI - finally watched the Avengers movie two weeks ago (not bad).

Hope China enjoys her new "doo". I took Grayson in for his "salon" treatment last week and he is looking a little less like a Golden (I will probably be ostracized by my Golden group) but he seems to be happier/less hot. Hope the estimates on the Echo are within reason.