Here we are, the final week of 2014!  I'm not quite yet organized for the year-in-review post, but I think I can handle the week just passed.

It was a nice week off from school and work.  And, as typical, we don't get too stressed around here for the holidays, but still manage to partake in the specialness.  The kids all seem happy with what Magnum and I got for them.  Maybe part of the Christmas Eve freeze-out is to increase the gratitude scale!  Heck, it works for me.

Plus they had Grandparent money to burn, so we did some Boxing Day shopping on Friday.  Mostly all at Bass Pro Shop, where I didn't care to buy anything, but I do enjoy looking at the fish.  The guys also went to Big 5 Sporting Goods, and I passed on that one.  Too bad because some drunk guy came in and started undressing!

I guess he was using the floor display exercise equipment and began stripping.  Management had to throw him out.  Dang, I knew I should've gone with them.

We've had fun gaming together, of the non electronic sort.  Along with the more wholesome games, we played that totally inappropriate game, and so now our familial relationships have reached a whole 'nother level...

Along more traditional lines, there's been jigsaw puzzling, working away on this Picasso.  Anyone know the painting?  Anyone? 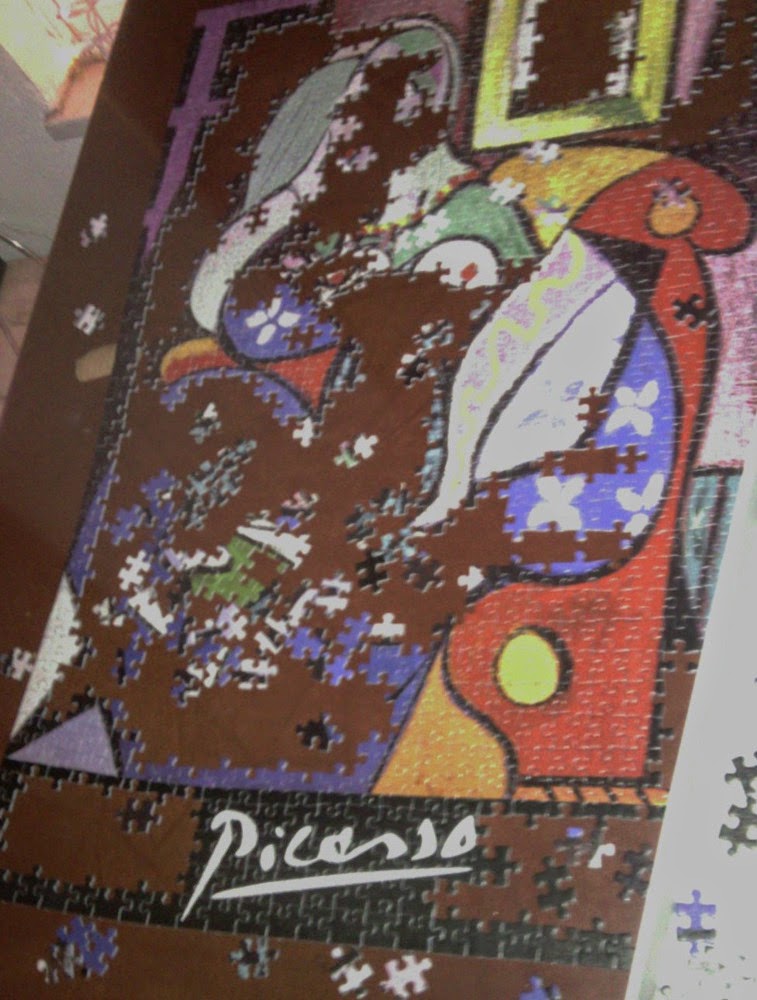 In movie news, Magnum and I watched "The Grand Budapest Hotel".  What silly fun is that?!  I'd never heard of it, but Magnum found it at the library so we gave it a go.  It's just silly satire, and I suspect that the many big-name celebrities in it had as much fun making it as we did watching.

And I will give a shout out to the makeup department.  Remember a while ago when I was bashing "Prometheus"?  One of my gripes was the terrible make-up job in making a young actor look like an old man?  Well, The Grand Budapest Hotel had it going on.  Tilda Swinton looked absolutely ancient!

So we're winding up the last of the year.  This week looks to be a blast!  As in arctic blast...  I suppose that's good, though, because I still have much to scratch off the to-do list.  I did get out today for a romp with Bella since it's probably our last nice bicycling day for a while.  The menfolk also took advantage by going to the shooting range and (literally) blowing away the Christmas cash.

I just watched the Grand Budapest Hotel as well. And I saw Tilda's name in the credits, but did not recognize her at all. Good makeup. I still can't decide if I actually like Wes Anderson films. I also watched Best Exotic Marigold Hotel, which was not as whimsical, but was very good.

I'd probably watch more Wes Anderson if I'm in the right mood. Certainly imaginative. I didn't recognize Tilda Swinton at first either. I was thinking the old lady sure looked familiar, though!

Gotta love shopping on the Grandparents' dime! Sorry you missed out on the stripping exerciser. At least I think I am?
The rest of your week sounds like it was a good one. And I'm guessin' you're ramping up for a midnight run in a few days? Could be a cold one.
I can't wait to start my next puzzle. Yours looks like a good challenge.
And we play Apples to Apples. A little more tame I think.

"Woman with Book" is almost finished thanks to our crap weather. And Cards Against Humanity is like Apples to Apples on psychadelic drugs!

My kids refuse to play Cards Against Humanity with Mark and me. Probably for the best. I've played it with our Bayfield vacation group and that's awkwardness enough for me! We've played the card game Crap on Your Neighbor with the kids and our neighbors and that's clean enough fun for me, except when neighbor Bill changed the name of the game to Stick it Up Your Neighbor's *ss and the kids were all highly embarrassed. Good laughs all around, though.

I think we all entered the CAH game with trepidation, and I'll admit that I played some cards differently than if I were with a different crowd! Neighbor Bill sounds like a hoot.

I LOVED Grand Budapest Hotel. Some meaning within the satire though. There always is.

Haven't yet gotten to Grand Budapest but I just finished Guardians of the Galaxy. I found it funny how you were commenting on Prometheus and it has been running on the movie channel for the past week or so. Got a chance to watch it again to see what I missed the first time around. Good way to coast into the new year!