Happy Thanksgiving to all my blog friends, lurkers, and people who accidentally ended up here!

I don't know about you, but I'm pretty full right now.  It's been another year of much to be thankful for.  Chaco and Wolfgang came home last night close to midnight, and Wolfgang and I headed out to the local turkey trot 5K this morning.


Beautiful day for it!  A week ago, the weather forecast was for highs in the 20s and snow, but things turned a corner for us.  It was actually a bit too warm, probably mid 40s by race start.  I was wearing a fleece headband that I didn't need for warmth, but I left it on to keep the hair out of my face.


Race Report
Over 3,800 racers came out to play.  As usual, it was pretty bunched up at the start, but things eventually opened up nicely enough. For the first mile, I used a kid of about 8 years old, wearing a plush turkey on his head, as my pacer.

I lost him somewhere, and during mile 2, I replaced him with a girl of about 10.  I said to her, "Good job, nice pace!" as I ran alongside. She started running faster, probably thinking, "Stranger danger! Stranger danger!"  Fine. 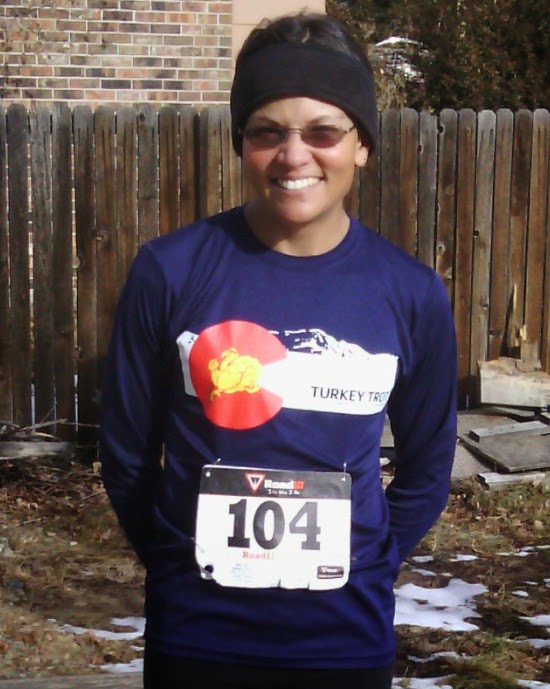 The last mile was a straight homestretch to the finish.  Very nice event.  Well organized and well attended as usual.  I haven't done many 5Ks and didn't really have a strategy, just wanting to go with the flow and enjoy the festivities. Wolfgang said he hadn't run in over a week, and it'd been a long time before that, so his strategy was much the same. And we both like the shirt design for this year.  They incorporated the Colorado flag and a mountain backdrop.  It's historically been just the fat running turkey.

So, my stats:  time of 23:32 - not my best, but not my worst either ,  256th overall, 53rd for the ladies, 3rd in my age division.  I was hoping to be a contender since I'm in a new old lady division now, but the two women who beat me are well known badasses in the local racing community, so I feel good about being in their company.

There's a video of the start here.  I won't bore anyone by embedding it, but Wolfgang goes right by the camera at about the 40-second mark.  My turkey-headed pacer and I go by at around 47-seconds.

Post-race report
We have since enjoyed our meal and are happily digesting around some video games and me with the blog.  There is some serious talk about door busting a Best Buy later.  Will we do it?

Remember how I said we had a big old TV we just wanted to get rid of?  Best Buy takes old TVs!  I, for one, have no desire to door bust, but when I jokingly said we should go there to get rid of the TV today, there was some interest.  Seriously?!?

So Happy Thanksgiving, everyone!  Thank you for continuing to stop by here and leaving nice and fun comments while keeping me entertained with your own blogs.  I know you could be doing other things!  (but why?)

With no computer for the past 6 months....I mean, five days....I managed quite well, which surprised me. But I would never get to the point where I'd go out in the cold and....run/walk/cry. You're my hero.

Happy Thanksgiving! Excellent way to kick off the holidays with a good run, clear weather, great temps. We had the same conditions down here including the temps for our trot. I spotted many of those plush turkey hats as well. I even recall running the last mile pacing a 7 year old girl as well - I was impressed that she was doing a pretty darned good pace for a 7 year old.

Good luck if you brave Best Buy tomorrow. Getting rid of the old boat anchor TV might be worth the hassles.

Happy Thanksgiving! Nice that the weather cooperated for your Turkey Trot. And congrats on a very respectable finish! Thank goodness I don't need any more pie, because I have no idea what the blue thing is....
Can't wait to hear about the Best Buy door bust! Pretty brave of you all to consider heading out into the madness.

I'm jealous that you all celebrate Thanksgiving and yet here in the UK it's just another boring day.

Btw You are looking good for an "old" lady. I thought you called yourself a fat turkey running for a second, and thought that was a bit harsh on yourself. :D

I dunno. I think being out in the cold run/walk/crying is easier than being computerless for FIVE days!

That's what I like about these turkey trots - such a fun mix of bloodthirsty competitors, little kids with turkeys on their heads, families wearing group salmonella costumes... WAY funner than door busting!

We DID got to Best Buy! Chaco had a valid argument: "Well, we already ate. We can go to Best Buy, come home, and eat again!"

That blue thing was a freebie from one of the race vendors - it's a little aerosol spray thing for hand sanitizer - like mace, only friendlier!

You're quite right to be jealous. It's a nice holiday, save for the tramplings on Black Friday.

HaHa!! The shirt, Joey, the SHIRT!

And what IS that thing for?? Inquiring minds want to know! New old lady category? You don't look it!

Congrats on a very respectable finish! The Turkey Trot sounds like a lot of fun. I heard of a few friends doing a Thanksgiving run around here and was kind of jealous. But I was busy preparing for company and there's no way I could've squeezed in a 5K. Besides, it was SUPER cold here.