I'll admit, I'm a little sad to see 2013 go.  I remember last year at this time when I was all giddy because 13 is my favorite number.  But it was a good year overall, and now off it goes into the sunset.

We did manage our traditional Midnight Mile last night.  Wolfgang is nursing a sore foot and didn't think he should run, so he very sadly went to a party.  But the rest of us were up for it.  It was a relatively balmy 30 degrees.  I suggested we go topless (within reason) to make it more extreme, but that idea was met with little enthusiasm.

We agreed on shorts and short sleeves. 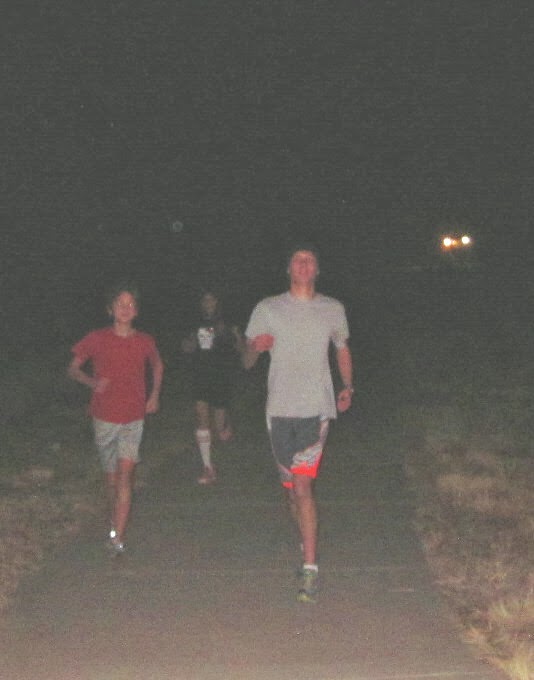 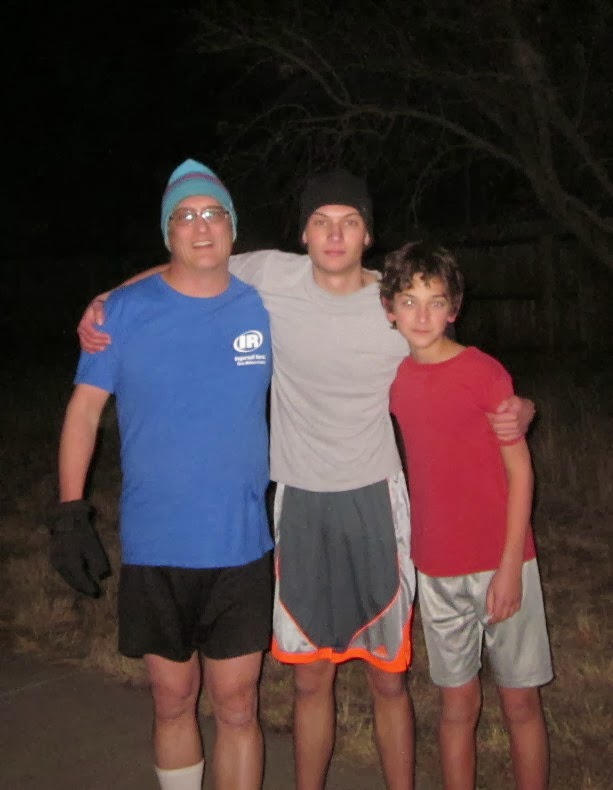 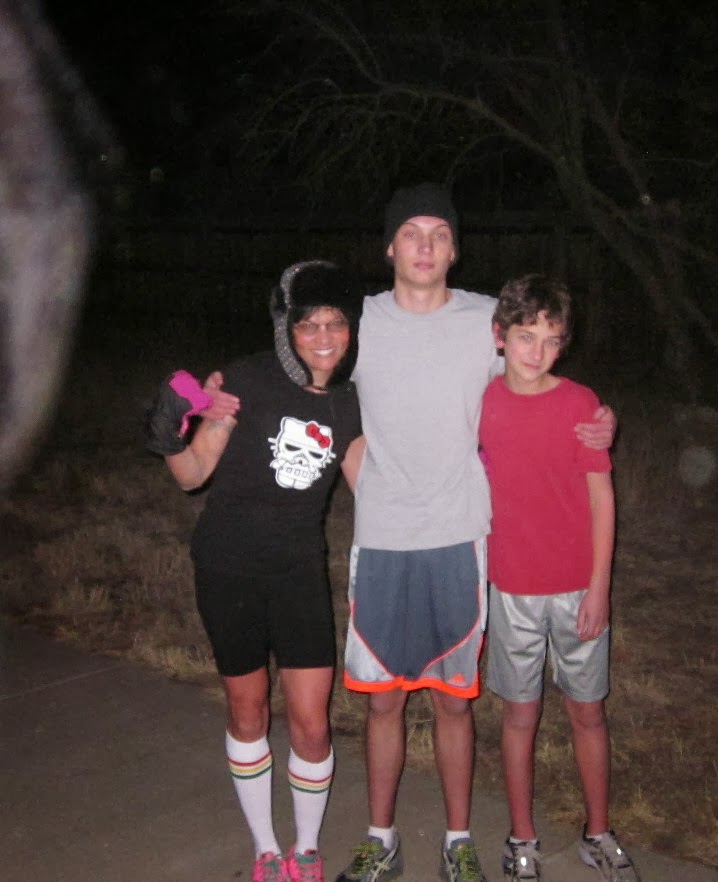 No rules limiting hats and/or gloves however.

Even so, it was quite mild, and we all agreed afterwards that topless would've been very doable, although a bit unattractive...


I managed to catch a few zzz's before the alarm summoned me to get my butt to the start of the annual New Year's Rescue Run 10k.  It was still in the 30's, but the yuck wind had come for a visit.

As expected because of the mild weather, there was a pretty good crowd.  I lined up with the rest of the revelers, and soon we were off.  The course is very hilly, with a steep beyotch of a hill shortly after the start.  This hill served to weed out a few of the pack, and by the time I thankfully got to the top, I didn't feel so crammed in.

The remainder of the race was pretty comfortable and those hills rewarded us with beautiful views of the city and beyond to the east and the mountains to the west, but we continued to be battered by a cold north wind.  Since it's an out-and-back-loop, eventually those nasty hills became friendly downhills and the headwinds became tailwinds.

When I ran this race for the first time last year, it was fairly icy and so the downhills didn't help a whole lot.  This morning, without the ice, I tried to take better advantage.  I seem to have learned to fall downhill quite well while appearing to be running.

As I  neared the finish, I noticed bystanders cheering me on as if there weren't too many women in front of me.   In the end, I took 5th overall for the ladies and 1st for the old ladies.  Wheee!  Official time of 47:08, which I was happy with as my goal was to be sub-50. 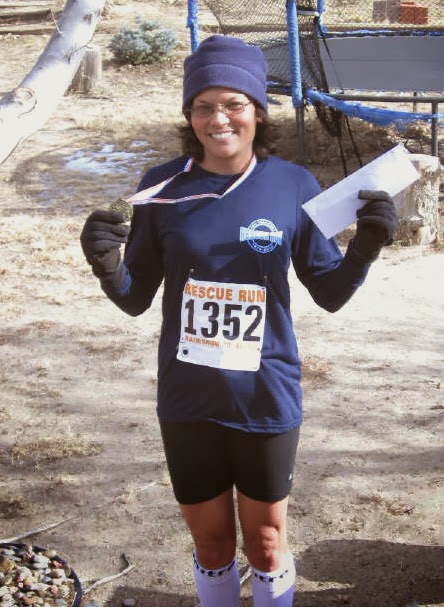 I received a gift card to a local seafood restaurant and this lovely gold medal.  I'm sure it's real solid gold.

Brave souls, all of you Normals! Way to go on the midnight mile. I was snoozing happily under pile of blankets by the time you were running.

Congrats on your awesome finish in the Rescue Run. Did you recently say you wouldn't label yourself an "athlete" or "serious athlete" or something to that effect? Might be time to change your mind on that!

Maybe the whole midnight mile business is to make that pile of blankets all the more cozy. It works!
I still don't really see myself as an "athlete". It's all just fun, and I mainly just compete with myself. Some of those ladies today - out for blood I think!

Congrats on your awesome finish!--and another "cool" family event. You rock.

OMG, just reading this exhausted me. By 9:30 on New Year's Eve, I was in bed (after working on a jigsaw puzzle -- yes, the "Breaking Bad"-related one). And 9:30 for me is LATE! Once again, the former badass in me laments the lameass I've become!

Congrats on the solid-gold medal. If you send it to me, I can verify whether it's real. Promise to send it back. Really. Really!

p.s. in that third picture, is that a tattoo on your arm? I looked at the picture so many times I began to feel creepy. Figured I'd just ask, in case you can tell that I clicked on/enlarged it an alarming number of times!

Humidity was probably around 10%, so that helped!

I USED to go to bed early on NYE until a few years ago, I flippantly said, "I'm only staying up if someone runs a mile with me at midnight", expecting no one to take me up on it. Everybody came along.

Yes, that's a tattoo, I'll upload clearer pics next post. I wouldn't want you to strain too much looking for it - lawsuits and all...

Note to self: never utter those words. My husband would probably take me up on it too!

p.s. despite compelling evidence to the contrary, I haven't been sitting here, staring at your blog and waiting for a reply. Honest! Dammit. Now I look like a psycho. Leaving NOW, and for at least a whole day.

I just got a vision of you running a 10k at 80 years old and still coming in way under an hour! :)

Congrats on your win! Not a bad time for an "old lady". I can see you keeping your standing on future runs. And those hills can really separate the amateurs from the real runners.