I realized a strange thing today. I realized that all of my Christmas shopping is done.  Finished.  Finito.  I've got a whole 'nother week, and yet... here I am.

That's not to say that all of Christmas PREP is done.  Oh no no no no.  We don't have a single Pagan symbol embellishing either the interior or exterior of the house.  But that will happen in due time.

And the food.  I don't have any Christmas food.  I usually do up a ham with some good ham accessories, but I'm considering lamb this year.  It seems so mean to eat a lamb.  Why do they have to be so tasty?

But wait, I got sidetracked.  I'm supposed to be blogging about how my shopping is all done and how that's a good thing.

To be honest, we don't have a major list of people to exchange gifts with.  Way back when, we used to exchange with just about everyone in the family tree - including all of Magnum's step-branches.  That fizzled quickly, especially after we all started popping out babies.

But silly me, I went to the post office yesterday.  As if having all of my shopping done wasn't providing enough "holiday cheer", I went there and later learned that December 16th is the busiest post office day of the YEAR.

But I did spend a little bit of time there to retrieve the contents of our p.o. box and then gawk at the ridiculous line.  While doing so, I heard, "Hey, you're a bicycle!"

I looked down to see a little girl addressing me.  She was with her mom and three sisters.  I'd guess all the kids were under 5 years old.  I realized that as I stood there observing the poor slobs in line, I was still wearing my bike helmet.

I admit that I don't envy a mom with 4 kids under 5 at the post office on the busiest post office day of the YEAR.  The mom somewhat apologized for her daughter's shyness {sarcasm}, but I daresay there are much worse things she could've called me other than a bicycle.

But I was able to report to Magnum last night, once Meego was out of earshot, that our shopping is done.  Then I listed the things I'd gotten.  So now my challenge is to remember - for an entire week - where I put stuff because I sometimes forget such things.  And well... 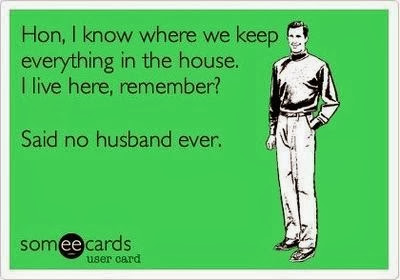 THAT is impressive. A whole week early! Are they wrapped too? Wait. Don't tell me. I don't need to feel worse about my procrastination habit.
I am much further along than years past though. Sadly it's because Hubby's parents both passed away this year, and suddenly we have fewer people to buy for.
More than once I have forgotten about a well-hidden gift, but I am by far the best finder of things in the house. What is it with husbands and kids?

Just so you don't feel bad, lamb comes from fully grown sheep. Just young ones. So they aren't the tiny cute ones or anything. Don't feel bad for eating something so very delicious.

Oooh, that last cartoon is so apt. I can't eat cute things. I'm challenged that way. My friend, on the other hand, asks, "If God didn't want us to eat animals, why did he make them out of meat?"

The only time I get lamb is when I'm on business travel. No one else in the family likes it. Come to think of it, I have to practically BEG for oatmeal raisin cookies around here! Everybody else likes peanut butter.....

If your shopping is done, why not just have Christmas now?!

Hm, a girl being called a bicycle is NOT nice over here... The inplication is that everyone has had a ride, if you get my drift... Don'tr slap me, I didn't say it!

Yes, Rock Chef's definition of 'the town bicycle' is the same over here. But when it comes out of a five year old, well, no harm done. It's probably a cool sort of compliment! I am basically done my shopping as well. The presents are even wrapped before Christmas Eve this year. Crazy. Mind you, my husband, Mr. Christmas is the main reason for my being so organized. He's had two weeks' holidays.

They're supposed to be wrapped...? I'm too busy procrastinating.

Well, I learned something new! Seeing them as obnoxious teenagers does make it a little easier.

I only prepared lamb once - for Easter a loooong time ago. I think the kids were too young to really form an opinion, and part of my hesitation is in not knowing if anyone will like it after all that trouble and cost. And speaking of trouble and cost - Christmas now works!

Well, outta the mouths of babes. I don't think the little post office girl is Canadian or British, so I'm going to let her remark slide!

I guess technically, my husband is also the main reason for my being ready - his paycheck is much bigger than mine and goes straight to the joint account. He still doesn't know where stuff is, though.

I'm jealous. I'm not done with anything. I'm hosting Christmas for my whole extended family and my house has never been big enough for that kind of entertaining. And today, I invited a coworker and her husband to join us, if the happen to end up having to cancel their Christmas travel plans, which is a strong possibility. But oh, well! I love it all and will be sad when it's over too soon.

You really could be called worse things than a bicycle. I know I have been.

So... "someone" could just wander in during all the fun festivities and yummy food and blend in, creating no suspicion? Just wondering...