try not to miss me

At first, when he moved back from the dorm last summer, it was an adjustment for me to get used to not having as much space as I prefer.  I've mentioned that I'm a minimalist.  He's doesn't really buy into the minimalist lifestyle.

And that's okay, I knew we would be just fine.  It would just be for the summer, and so I wanted to make the most of having him home.

I grew used to seeing him in the kitchen in the mornings, brewing up something good for breakfast.  Just knowing he was there, at home, each day, was comforting.  Plus, he helped me out, doing work around the house that saved me time.

As the end of summer approached, I had to brace myself for him leaving again.

But as the day of his departure got closer and closer, I felt myself becoming more uncomfortable at the thought of watching him go.  What had started out as encroachment into "my space" had become the filling of a void I didn't know existed.  I really, really didn't want him to go back.

I told myself, it was my duty as a mother to let him go.  We intended for him to be at college from the start, and that's where he would be.

And then I said, "screw it already, I'm getting another one for home". 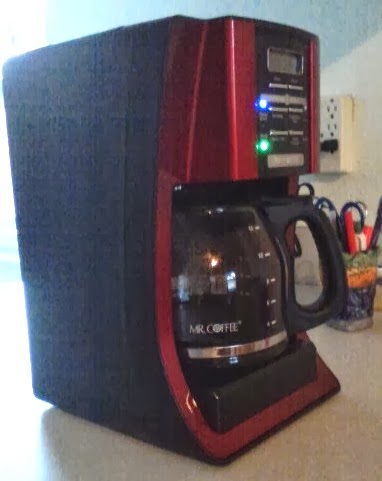 That there is the ONE THING for which there will always be room in our kitchen, and it's the biggest sacrifice made when camping. Say, is that half full?

Man! I wish mine would go away to college, so that I could replace it with something better. In fact, if it continues to act like it does, and get all overheated, leaving a bitter taste in my mouth, I may just force it to leave.
If that ever happens, I'm coming to you for advice. Your replacement is a beauty!

I'm glad this is an addiction I do not suffer from. In fact caffeine makes me rather ill. My drug of choice is sugar.

For so long, I resisted. Darn peer pressure.

Sounds like it's time to throw the bum out?
I was hoping the original would change its mind and stick around. He couldn't really want to go live in a dorm again, could he?? Denial.

Candy makes me crazy. And not in a good way.

Sniff, sniff. It is hard say good bye. They seem so young and fresh only to have them grow up and head off off to college. Oh well. We all must learn to let things go. Perhaps you can find another to take it's place. Maybe a new Keurig like Terri sold me on.

And, just as reference, when I went off to college several decades ago, I had an old, plastic generic percolator that sustained me through the years. Something about stale, burnt, scalding hot coffee made me appreciate the finer blends of today... .

I can't handle the smell of strong coffee...

Could've been the kid you were talking about, but I knew it was something else. Maybe if I was a cup of Joe person, I could have guessed. But, I'm like the English-it's tea for me-after lunch. Gets me going again.

He's a handsome, shiny, red and black fellow. I know you love him dearly.

I adore having my coffee every single morning. Loved this piece.

I was just thinking this morning how much I LOVE the smell of coffee. Funny because I wasn't a coffee drinker for the longest time. Now I have a Keurig in my kitchen and I'm not sure I could start my day without it.

You totally got me up until that picture!

Brings back memories of my little aluminum stovetop percolator from my college days. It's not right that our kids have better appliances than we do!

Interestingly, neither do I. I have to throw out the coffee grounds - outside the house - shortly after it's finished brewing. (Sounds like a smellarm option to me! *hint*hint*)

If I had to choose between giving up coffee and giving up tea, I'd choose to give up coffee. Geesh, it's like Sophie's Choice!

I was hooked at "programmable".

I've seen the Keurigs. Maybe the Mr. Coffee is just a gateway appliance?

Oh, you got me...lol. It is the first time on your blog. I do not drink coffee and only drink unsweetened iced tea.

A bf bought a coffeemaker to keep at my house for when he was here. He drank coffee all day long. It was always in the way. When he dumped me, he left it to "come get it later." I accidentally turned on the burner where I had set it out of my way. It melted. It really, really was an accident. That is one of the only joys of being single--I don't have a coffee pot on the counter and don't have to smell coffee!

Sorry about the son leaving, too.

HA!!!! OMG sistah! You totally reamed me with that one!!! I was all prepared to support your feelings, dammit.

I wish coffee tasted as good as it smells. I had a FIT when Joe wanted a Keurig. Now? I find it seems better (mentally) to know you're getting a fresh, fresh CUP of coffee instead of lugging that pot, and throwing most of it down the sink anyway.

MY coffee always got the loudest laughs at the fire house: 1/3 Cremora 1/3 sugar 1/3 coffee. Sometimes it was like drinking sugary dumplings.

I'm sure I left a comment here last week...oh well. You made me laugh! And here I thought you were getting all sentimental about your boys off in U. Coffee is very important, though. I like to say, "This day brought to you by coffee." Because often, it is true!